In this experiment, two different methods were used to discover the acetic acid content in a sample of vinegar. The known percent of acetic acid in vinegar is 5%. The first method used was titrating with a visual indicator. The percent of acid found using this method was 5.086%. The second method was the use of pH meter to measure the change in pH. The percentage from using this method was 5.049%. The pH meter method was slightly more accurate than the visual indicator method.

Acetic acid is the major acid that is found in vinegar. Acetic acid is also known as ethanoic acid, and its molecular formula is C2H4O2. It is found in many other substances other than vinegar, such as explosives, sugars, and starch. Acetic acid can be formed in the atmosphere and it can also be produced when biological waste decomposes. Humans are regularly exposed to acetic acid through foods and also from the air and are not in any danger from this exposure (PubChem). Acetic acid by itself is clear and colorless. It gives vinegar its distinct odor (“Acetic acid”).

The procedure for the first experiment began with the preparation of the base used for the titrations. The base I used was sodium hydroxide. To prepare this, 4.069 grams of solid NaOH was dissolved in 1.00 L of distilled water. This result should be close 0.1 M sodium hydroxide. The NaOH was then standardized with potassium acid phthalate. To standardize it, 3 samples of KHP weighing between 0.7 and 0.9 grams were put into clean, numbered 250 mL Erlenmeyer flasks. Record the weights of KHP samples in notebook to the nearest 0.0001. 50 mL of distilled water was then added to each flask. After the sample was dissolved a few drops of phenolphthalein indicator was added to each sample. A buret was then filled with the prepared sodium hydroxide and air bubbles removed from the tip of the buret. Record initial volume and then titrate the first sample. Slow down the flow of base as a pink color starts to appear in the Erlenmeyer flask in order to insure that the end point is not passed. Titrate drop by drop until a light pink color persists throughout the entire solution. The color should last at least 15 seconds. The color may then fade after sitting for several minutes due to carbon dioxide in the atmosphere. Record the final volume on the buret. Repeat this process for the other two trials. Calculate the molarity from each of the trials. Average the values of the trial and find standard deviation. If the standard deviation exceeds 2 parts per thousand, talk to the instructor, and if not, then move on to the next part of the lab.

In this part of the experiment, the acetic acid content in vinegar is determined. Transfer 25.00 mL of vinegar using a volumetric pipet into a 250-mL volumetric flask. Dilute with distilled water and mix thoroughly. Pipet 50.00 mL of this solution into a 250-mL Erlenmeyer flask. It is not necessary to add the 50 mL of water to this before titrating, but make sure to add a few drops of phenolphthalein indicator. Titrate using the same method as previously explained and repeat this for two more trials. Store remaining NaOH for the next experiment. Calculate the content of acetic acid present in the vinegar.

For the second part of this experiment, a potentiometric titration will be used to calculate acetic acid content in vinegar. First calibrate a pH meter using a buffer. Rinse the pH electrode with distilled water and place in a 6 buffer. Wait for it to stabilize then calibrate. Because my pH electrode was not working correctly, a cheaper and slightly less accurate version had to be used. Keep the pH meter immersed in water. Obtain a magnetic stir plate and place it under a buret filled with the 0.1 M NaOH solution. Next, pipet 25.00 mL of vinegar into a 250-mL volumetric flask and dilute with distilled water. Pipet 50.00 mL of dilute vinegar into a 250-mL beaker. Place a magnetic stir bar in the beaker then put on stir plate. Place the pH meter in the beaker, and record initial pH and initial volume on the buret. Add about 5 mL of NaOH to beaker and record pH reading. Continue until pH of 7 is reached then switch to about 1 mL increments. When pH reaches 8, start doing a few drops at a time. A noticeable jump in pH will occur. Keep titrating this way until a pH of 10.5 is reached. Repeat this process for two more trials. Equivalence point can then be determined from a graph of data collected.

Volume of Titrations (for vinegar) 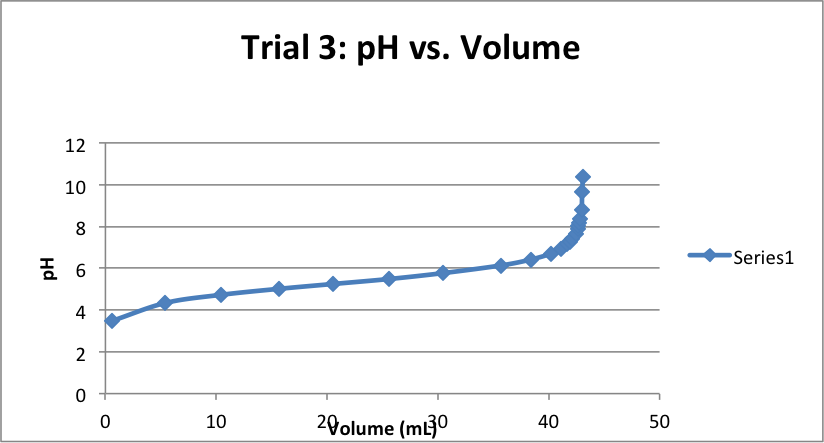 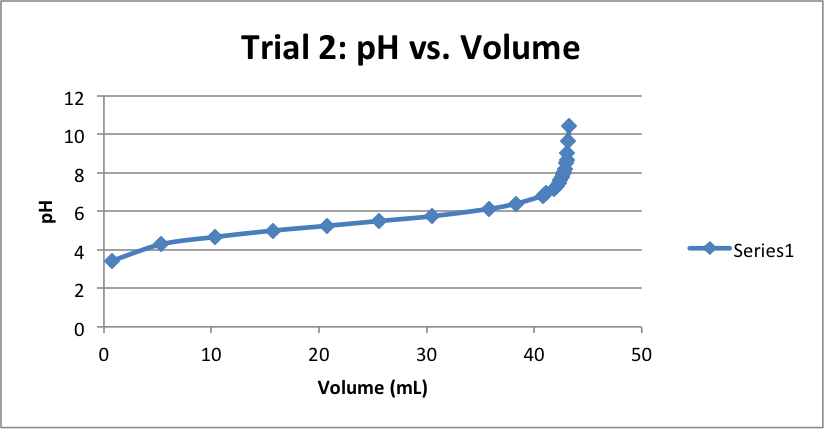 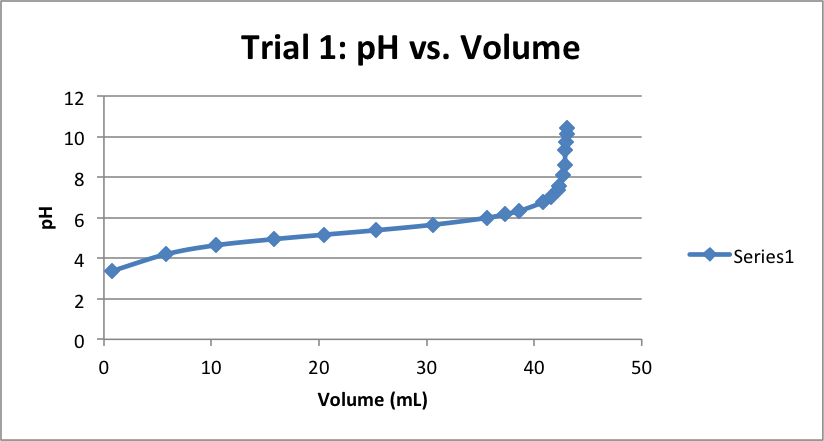 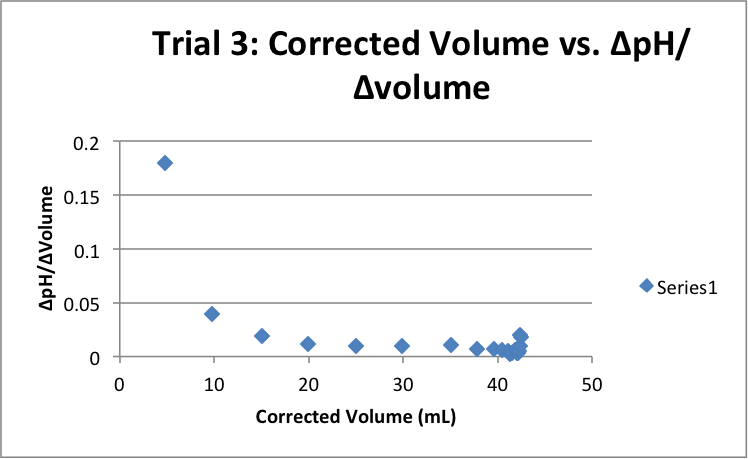 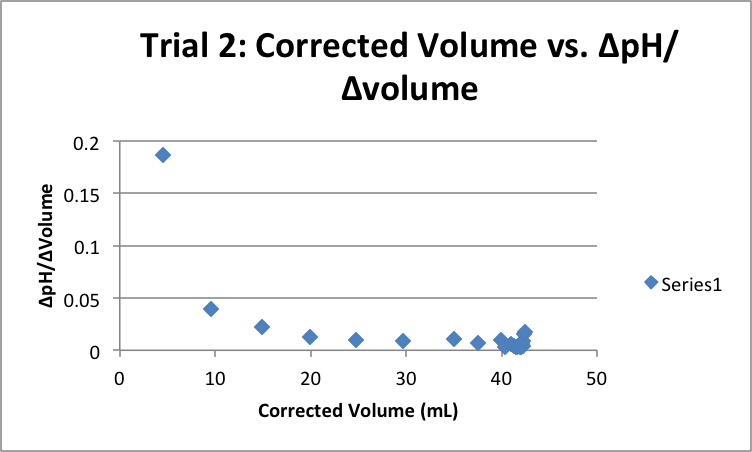 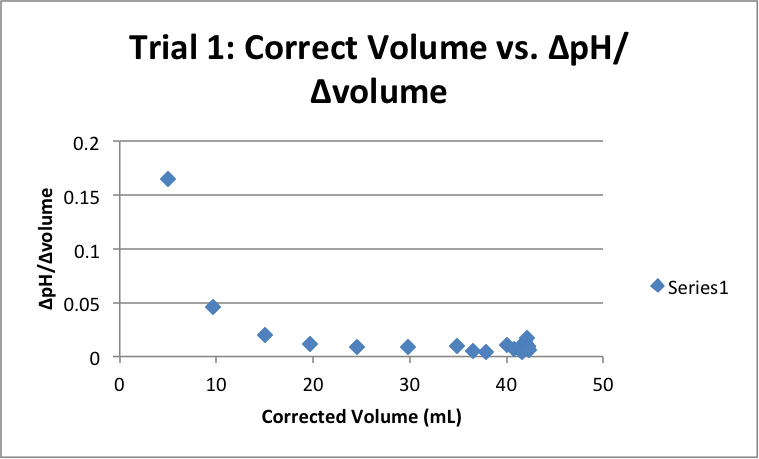 *Repeat for other trials

Volume of Titrations (for vinegar):

*Use same method as previously stated

*Repeat for other trials

*Repeat calculations for Part 2 of experiment

Molarity of acetic acid calculated from titration with visual indicator:

3.047>2.92 meaning greater than 90% confidence. There is not a significant difference between methods.

The results concluded from this experiment were reasonable and accurate. The molarity of the acetic acid found from both experiments was very close to the actual molarity found in the vinegar. In the first part of the experiment, a visual indicator was used to find the acetic acid content. The mass percent found was 5.086% and the amount stated on the bottle was 5%. The percent error was only 1.7%. It should probably be rounded to 2% because only one significant figure was stated on the bottle. I can still conclude that we were very close to discovering the actual amount of acetic acid.

In the second part of the experiment, a pH meter was used to calculate the molarity. This method showed that the mass percent of acetic acid was 5.049% which is even closer to the actual value if the actual value is exactly 5%. The percent error was 0.98% which can be rounded to 1%.

If the experiment were performed again, there would be only one change I would make. I would obtain a sample of vinegar with an acetic acid known more specifically. It would be good to know the content to at least one or two decimal places. The results could be analyzed more effectively and the accuracy would be much easier to see.