Theory. This experiment was carried out to see how the hydroxyl group on the benzene ring in salicylic acid reacts with acetic anhydride to form an ester, and to make aspirin.  Synthesis of Acetylsalicylic Acid occurs by protonation of carbonyl (C=O) group, and a nucleophilic attack of OH on the acetic anhydride. The ferric chloride test and melting point were used to test the purity of the results. A hypothesized recovery rater of above 50% was expected.

Procedure. 0.211g of dry salicylic acid was placed into a dry 5-mL conical vial, and dissolved in 0.480 mL of acetic anhydride and one drop of concentrated phosphoric acid in a hot water bath of 50oC. The mixture was heated and stirred for 10 minutes and then allowed to cool. The conical vial was placed into a small beaker and allowed to cool so that the acetylsalicylic acid would crystallize from the reaction mixture. The acetylsalicylic acid crystallized. Next, 3.0mL of water was added and stirred with a microspatula. The crystals were removed and collected in a Hirsch funnel through vacuum filtration. The crystals were dried overnight on a watch glass. The crystals were then weighed to calculate the percentage yield. The ferric chloride test was performed to test the purity. After the aspirin was found pure, the melting point was taken.

Thieno[3,4-b]pyrazine-2,3(1H,4H)-dione (5). The following is a modification of previously reported methods. 3,4-Diaminothiophene (2.85g, 25 mmol) was dissolved in 20mL of absolute ethanol. Diethyl oxalate (30mL, 220 mmol) was added to the solution. The reaction mixture was refluxed for 8h. After the reaction mixture cooled to room temperature, the solid residue was recovered by vacuum filtration. The product was used without further purification. 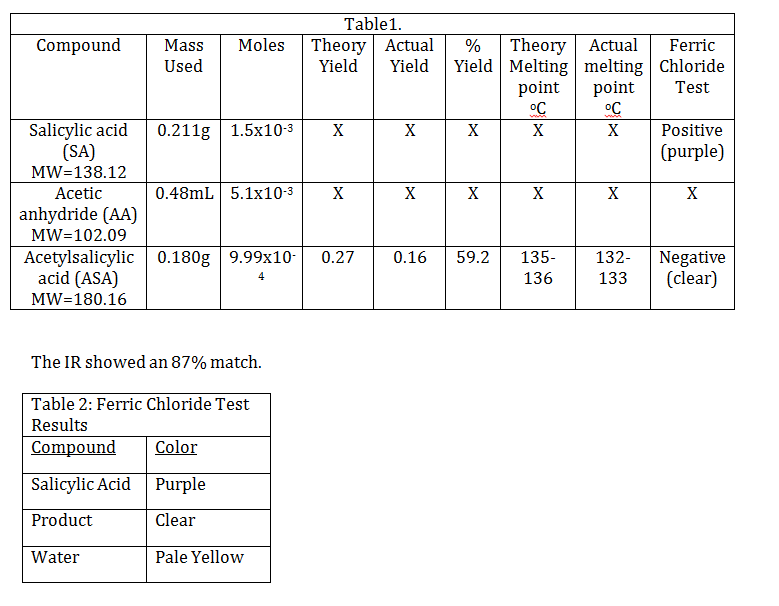 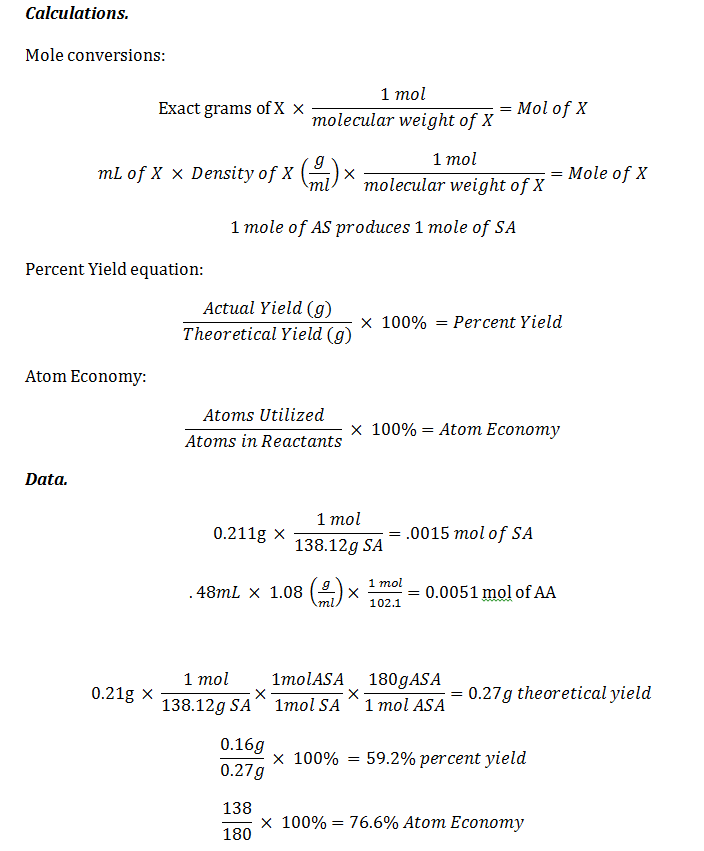 Conclusion. The percent yield was 59.2%. This could have been due to a number of things, for example when we were transferring the product to the watch glass some may have remained in the Hirsch funnel. We had hypothesized that we would obtain >50% percent yield though and that was correct. The melting point of the aspirin made was 132-133oC, which is slightly lower than the theoretical melting point of 135-136oC. This could be due to the fact that the melting point may have been taken too quickly. The ferric chloride test results were pleasing. The product was clear, showing that there were not traces of salicylic acid (which would have turned the compound purple), but acetylsalicylic acid was indeed made. Our IR showed two C=O peaks, one benzene peak, and two of the three Csp3 peaks which account for its 87% match. 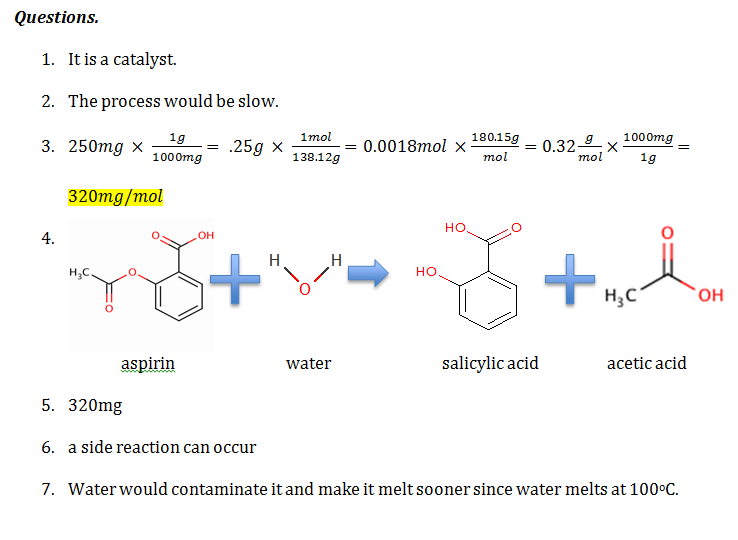