Acid- Base Titrations
By Julia Trimble

A titration is a procedure in which two solutions are introduced to form a reaction that once completed, reaches an identifiable endpoint (Murphy, 2012, p.305).  During a titration, the volume of one reagent, the analyte, is predetermined while the other reagent, the titrant, is prepared in a buret and slowly introduced to the analyte solution.  The completion of this reaction can be determined via observation through the use of an indicator.  The amount of titrant released from the buret at the endpoint signifies the volume of solution necessary to complete the reaction.  From this given volume, the concentration of either titrant or analyte can be determined when equilibrium is reached between reactant and product (Murphy, 2012, p.305).

In this experiment, the reagents combined are an acid, HCl(aq) and a base, NaOH(aq) where the acid is the analyte and the base is the titrant.  The reaction between the two is as follows:

In this case, Sodium and Chloride act as spectator ions and form into salts in a neutralization reaction.  The titration of this reaction that occurs allows one to “standardize” the concentration or value of either reagent used.  In part A of this experiment, the concentration of NaOH(aq) was determined.  The calculated value of the base can then be used in the “back-titration” of another reagent as is done in part B where an antacid, composed mainly of CaCO3(s), is used to neutralize the acidic HCl(aq) solution.  The reaction is as follows:

For this particular experiment, back- titration occurs when an antacid is dissolved in excess HCl(aq) and the remaining acid is then neutralized by the standardized NaOH(aq) (Swartz, 2013).  From this, the change in molarity between the initial concentration of HCl(aq) and the moles neutralized will determine the mass of the active ingredient in the antacid that can later prove the effectiveness of antacid brands as buffers.

Begin by preparing a 0.10 M of 250 mL solution of NaOH(aq) using the MIVI=M2V2 formula and fill a 50.0 mL buret to the top.  In 3 separate 250 mL Erlenmeyer flasks, pipet 25 mL of 0.10 M HCl(aq) and dilute with water until the total volume reaches 75 mL.  An indicator, phenolthalein, must be added to the analyte solution to make the endpoint visible.  Release the titrant into the analyte solution until the reaction has occurred completely.  This will become apparent when the solution remains a constant pink color.  Use the calculated molarity from the volume of titrant to standardize the solution produced and prepare second half of experiment.

Prepare the standardized NaOH(aq) solution in a 50.0 mL buret just as in Part A and fill 3 separate Erlenmeyer flasks with a new solution of 25 mL 0.50 M HCl(aq), DI water, and a crushed antacid tablet with a total volume less than 75 mL.  Heat the analyte solution for 5 minutes to finalize the HCl(aq)/ CaCO3(s) reaction.  Once cooled, add the indicator Methyl Purple.  Slowly release the titrant and observe the solution transition from purple, the initial state, to grey, the midrange, and green, the endpoint.  Once completed, use the volume of titrant released to calculate the moles of excess HCl(aq) and determine the mass of CaCO3(s) present in the antacid tablet.

From Part A of this experiment, it was found that the average volume of titrant used to complete the reaction was approximately 26.05 mL meaning that it took about 26 mL of NaOH(aq) for the moles of each reagent to equal each other.  This makes sense considering that both are stoichiometrically equivalent given their common molar coefficient.  Therefore they both reagents should require similar volumes to reach equilibrium.  Given this volume, the molarity of NaOH(aq) was calculated to be an average of 0.106 M ± 0.001.  When this standardized titrant was used in Part B of the experiment, its average volume of 16.42 mL determined the amount of HCl(aq) left unreacted from the buffer reaction with CaCO3(aq) to be an average of 0.00174 moles.  The amount of HCl(aq) neutralized by the reaction was then used to calculate the moles of CaCO3(aq) in the tablet.  Then it was converted to a theoretical mass of 568mg in comparison to the actual mass of 500mg.  This value is within reason due to the antacid brand’s unusually high range of uncertainty of ± 50 mg making the error a mere 14%.  A few observable results of this reaction would include the significant color changes indicating the midrange and endpoint of the reaction.  The solution would produce a vibrant purple when the indicator was added and it would abruptly shift from purple to grey and soon after, from grey to green.  Another observation would be the chemical reaction between the antacid and the HCl(aq).  The solution produced heat, gas, and condensation along the sides of the Erlenmeyer flask as a result of the CO2(g) and H2O(g) escaping the system.

Throughout this experiment, several environmental influences played a big role on the measured data as well as precision.  A major source or error occurred in the measurement of CaCO3(s) in the antacid tablet.  The active ingredient of a tums tablet was measured in 1 significant figure and measured under an increment of hundreds.  Therefore, the uncertainty of the company measurement was ± half of each hundred, which is far too great of a range to truly have an accurate read on how effective the experiment was.  Another issue arose with the crushed antacid tablet.  After crushing the Tums tablet thoroughly with the mortar and pestle, when the powder was transferred to the solution, it was difficult to completely dissociate in the solution.  Even after constant stirring and swirling, a few small regions of powder settled to the bottom and formed small clumps.  While heating, this could have prevented a 100% complete reaction between HCl(aq) and the antacid despite the excessive heat.  It may have left more excess HCl than would normally have been.  The final source of error could have been due to the composition of the antacid tablet itself.  In this experiment, only the Calcium Carbonate was considered in the chemical formula however there may have been other ingredients within the tablet that could influence the concentration of substances of the reaction.  Within an uncertain concentration of CaCO3(s), there is an amount of uncertainty in the measured data. 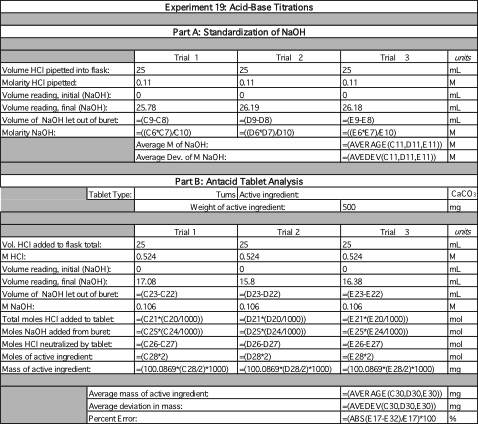