Where c is the molal concentration and γ is the activity coefficient.  However, the activity a single ion in solution cannot be measured due to the necessity of a counter ion.  To overcome this precise measurements of pH are done using a standard method in which a hydrogen electrode and a silver chloride or mercury(I) chloride reference electrode are immersed in the same aqueous solution and the electromotive force measured.  Such cells using silver-silver chloride electrodes are commonly known as Harned Cells which when measuring the pH of a hydrochloric acid solution is schematically represented as:

The half reactions at each electrode are:

Applying the Nerst equation to these two reactions and simplifying using aH2 = 1,  = 0, and aAgCl = 0 yields:

Where pH2 is the partial pressure of hydrogen at the electrode.  The potential of the cell is given by:

Since the concentrations of Cl– and H+ are essentially equal the product of the activities can be expressed as:

Where γ± is the mean activity coefficient. When combined with equation 3 this gives:

.  When √I, which is equivalent to √c in a 1:1 electrolyte, is sufficiently small the Debye-Huckel equation can be simplified:

And equation 5 can be simplified to:

Therefore  can be determined as the y-intercept and A as the slope multiplied by F(2RT)-1 of the plot of  vs.√c.

Solutions of HCl were prepared from a 2.755 M stock solution.  The molality of these solutions was calculated from the molarity using the equation: 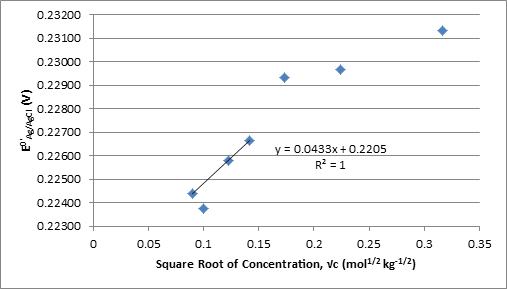 Figure 1. Plot of  Against Square Root of Molality Used to Determine
The values of γ± were also plotted against the square root of the concentration; the linear regression through the origin has the form of the limiting equation with the slope equal to Azi2 where zi is the charge on each ion:

Discussion
The experimental values for γ± in this experiment are fairly different from the Harned and Ehlers’ γ± calculated using the expanded Debye-Huckle equation.  The most significant deviation occurs in the measurement for the 0.01 M solution.  This value was not used when linear regressions were calculated in order to obtain values for with smaller uncertainty, R2 increases from .821 to .99997 with removal of 0.01M.  Data points above 0.01M also deviate from the linear regressions, but this is expected as  are linear with respect to √c only when 1+Ba√c ≈ 1.

where K’ and a are experimentally determined constants CGLS20 is the total Gronwall, La Mer, and Sandved extension extrapolated to 20oC and for 0.008M and 0.03M solutions.  Harned and Ehlers’ equation gives slightly lower mean activity coefficients at all concentrations, the extrapolation to 20oC was not perfect and the measurements in this experiment may have been taken slightly above 20oC.  The largest difference occurred at those concentrations which have values that don’t match the linear relation to √c that the others do, for these two it seems likely there was error in preparation of the solution.  For the remaining concentrations the percent difference between the two γ± was small and consistent, exemplifying the traceability of this method.

Gives results differing by at most 0.4% from Harned and Ehlers results, so comparison to experimental values is the same.

4. Molal measurement has the advantage of being temperature and pressure independent.  Molarity is more common and requires less calculation to prepare dilutions of, it is often more convenient to measure the volume of a solution than it’s mass.