This lab involves performing a technique called annealing. The purpose of annealing is to alter the properties of a material by heating it. When a material is annealed it is softened, and made more ductile and malleable. It is also made more corrosion resistant. Since the material is cooled slowly, it allows for dislocations to be healed, as they are moved to surfaces and grain boundaries. The purpose of this lab is to examine how the hardness of a brass sample is affected by annealing. In addition to hardness measurements, the average, standard deviation, and 95% confidence interval were calculated from the data.

The brass samples were heated in an oven at 800 degrees Celsius and then allowed to cool in the oven overnight. The Rockwell Hardness Tester was used to measure the hardness of the brass samples, as seen in figure 1 below. First, the non-treated brass samples were tested. The sample was placed on the anvil, and the wheel was turned until the penetrator tip just barely made contact with the sample. To calibrate the tester, the wheel was turned further until the hands of the dial gauge lined up with the triangles on the gauge. A close up of the gauge can be seen below in figure 2. To begin testing, the lever was gently pushed forward, and the machine applied a load to the sample. After the lever had completely gone forward, it was pulled back. The hardness measurement could then be read on the dial gauge. This process was repeated the exact same way for the annealed samples. 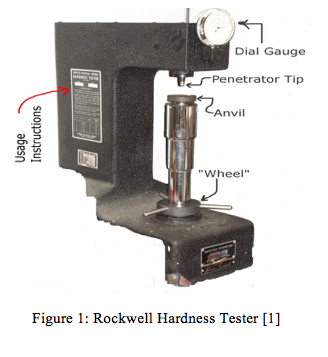 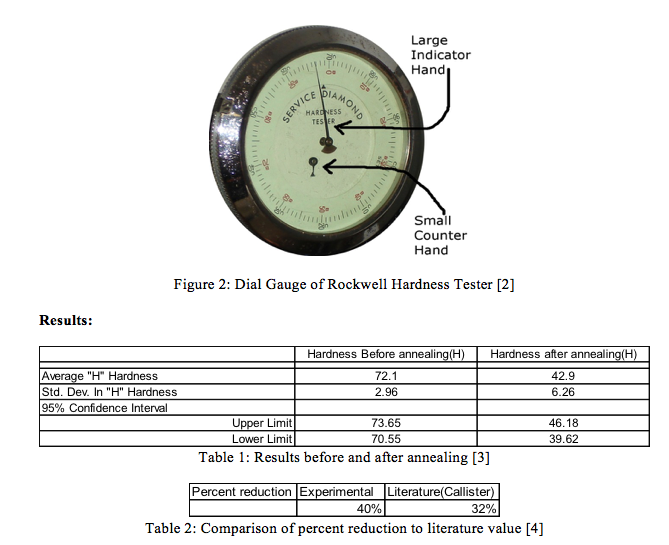 Table 1 shows the results that were calculated from the hardness data before and after annealing. From the 95% confidence interval, it will be determined whether or not the data overlaps. This will conclude whether or not the annealing actually made the brass softer. Also, table 2 shows the comparison between the percent reduction in hardness for experimental and literature value.

To determine of annealing did in fact make the brass sample softer, the 95% confidence intervals must be examined. This is done by checking to see if there is an overlap in the data. The upper bound of the 95% confidence interval before annealing is higher than the lower bound for the 95% confidence interval after annealing. This indicates that there is no overlap in the data, and that annealing did indeed make the brass sample more ductile. In terms of other mechanical properties, the hardness correlates to the size of the dent made by the testing machine. Also, annealing decreases the ultimate tensile strength of the material, and increases ductility. Since the brass was allowed to cool very slowly, crystal diameter was increased which improves corrosion resistance. The experiment yielded an approximate 40% reduction in hardness due to annealing. When comparing to the literature value from Callister(32%), it is slightly higher. This is most likely due to some sources of error in the experiment. It is possible the tester was not calibrated properly, or the lever was pushed too hard or pulled back too soon. This would also explain some sets of data that seem to be much more far off than the rest. 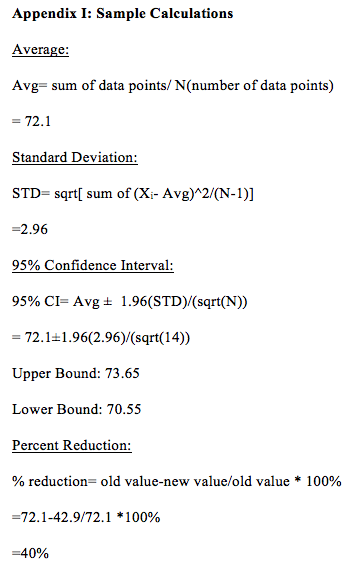 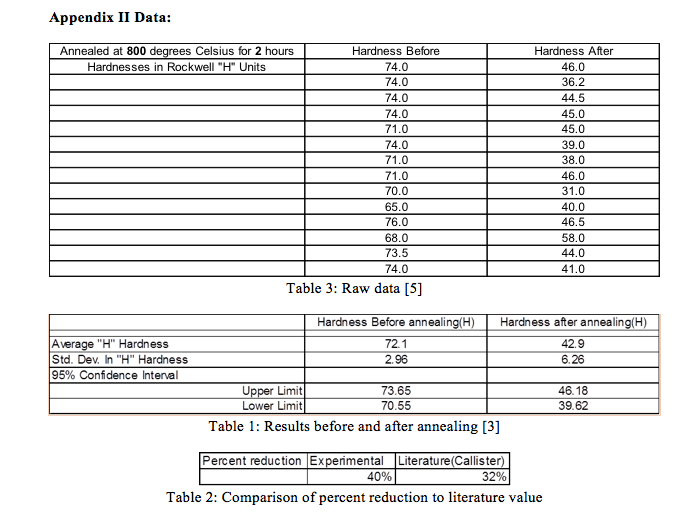