Before humans had the luxury of pain relievers and pharmaceutical drugs, many relied on the curing effects of willow tree bark, which was either chewed or boiled and used to relieve fevers and inflammation. Aspirin, acetylsalicylic acid, is a familiar drug, used for relieving cold and flu symptoms, fevers, and general aches and pains in the body, and, as made clear by its chemical formula, contains salicin – a chemical found in willow bark. In the following experiment, Aspirin was synthesized and analyzed in a laboratory setting in order to recognize the chemical process behind a common drug like aspirin and to relate it to the conceptual study of organic chemistry.

The initial step of the experimental process was the synthesis of Aspirin, which required the reaction of salicylic acid, acetic anhydride, and phosphoric acid to produce aspirin and acetic acid. This reaction is represented visually below:

As shown in the above reaction, phosphoric acid, H3PO4 acts as a catalyst in the initial mixture of the reactants in order to speed up the reaction.

After aspirin synthesis was complete, the aspirin was analyzed using both IR and NMR spectrometers in order to determine the hydrogen atoms and organic functional groups present in the synthesized aspirin and to verify the overall identity of the aspirin.

To begin the experiment, 2.00 g of salicylic acid (formula weight of 138.12 g/mol), 5.0 mL of acetic anhydride (density of 1.082 g/mL), and 5 drops of phosphoric acid were mixed in a 150mL Erlenmeyer flask, which was then placed in a beaker containing de-ionized (DI) water heated to 75°C on a hot plate. Salicylic acid was a white, chalky powder; acetic anhydride a clear, colorless liquid; and phosphoric acid a clear, yellow-tinted liquid. The final mixture, a clear, colorless liquid, was stirred occasionally and the temperature of the water was monitored. After 15 minutes of maintained heat, the flask was removed from the water and 2 mL of DI water was added, producing an aromatic vapor. After the vapor dissipated, a second volume of DI water, 20 mL, was added. The flask was then scratched on the bottom and placed in an ice bath to encourage crystallization. While the mixture in the flask cooled, a vacuum filtration system was created, and once crystallization occurred, the mixture was poured through the system so as to pull the liquid in the mixture through to the flask, leaving white, powdery crystals on the filter paper. The crystals were then washed three times with the vacuum using 5 mL amounts of DI water. Lastly, the crystals were scraped into a labeled, pre-weighed beaker and placed in a 40°C oven for 46 hours to dry. After the crystals were completely dry, the beaker was weighed a second time, including the crystals, in order to obtain the actual yield of synthesized aspirin: 2.1 g. This value was used, along with the theoretical yield value, to calculate the percent yield of the synthesized aspirin: 81%.

Caution – acetic anhydride, salicylic acid, and phosphoric acid are all toxic chemicals and should not come into contact with the skin. CDCl3, used later for spectroscopy, is also a toxic chemical.

Next, NaOH was used to titrate commercial aspirin tablets – one tablet of aspirin, weighing 325 mg, was dissolved in methanol, and then 10 mL of DI water and 4 drops of phenolphthalein (indicator) were added. This mixture was generated a total of three times, so as to have three separate flasks with identical mixtures for three trials. A 50 mL burette was then washed with one 5 mL portion of NaOH, then filled to near the 0 mark of the burette with NaOH. The starting reading of NaOH was recorded. Titration was then performed in three trials, each by adding NaOH to the mixture in the flask until the mixture turned light pink and maintained this color for 15 seconds. The end point reading of NaOH was recorded. The moles of aspirin used was calculated and incorporated into a calculation of the average concentration of NaOH (mol/L) using the second and third trial amounts of NaOH. These trials’ pink solution were light, while the first trial’s pink solution was too dark, and resulted in a smaller concentration of NaOH.

To finish the experiment, three titration trials were performed using the synthesized aspirin. 0.3 g of aspirin was weighed by difference and dissolved in 5 mL of methanol in an Erlenmeyer flask for each trial. DI water and four drops of phenolphthalein were added, and the same process of titration was used. All three synthesized aspirin titrations yielded a light pink color for 15 seconds, thus each trial was successful and used in calculations.

The synthesized aspirin was also used in two different types of spectroscopy: NMR and IR. NMR was the first to be tested: a glass NMR tube was filled with the aspirin sample to a height of approximately 0.5 cm and 0.6 mL of CDCl3 was added in order to avoid large protein peaks. The solution was then inserted into an Anasazi 60 MHz FT-Nuclear Magnetic Resonance Spectrometer and the spectrum was printed. During IR spectroscopy, a pinhead sample of aspirin was placed on the diamond ATR plate of a Nicolet iS10 Infrared Spectrometer and the spectrum was printed.

The trial results of the commercial aspirin titrations are listed below:

The trial results of the synthesized aspirin titrations are listed below:

The spectrum attained from NMR spectroscopy of synthesized aspirin is below:

Figure 2.1 The NMR spectrum of synthesized aspirin displays a peak 2.4 PPM and a range of peaks from 7 PPM to 8.3 PPM

The spectrum attained from IR spectroscopy is below: 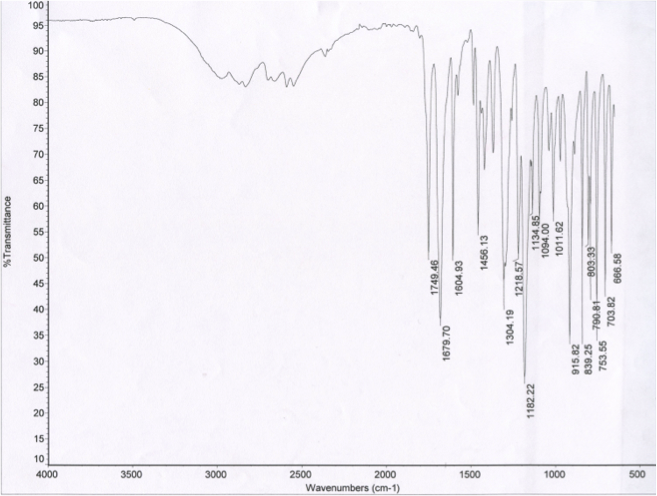 Each spectrometer yields further results regarding the purity of the aspirin. NMR spectra reflect the presence of hydrogen atoms, or protons, in a substance. The two starting materials in the aspirin synthesis reaction were acetic anhydride and salicylic acid. In the reaction between acetic anhydride and water, a gas was released that gave off a smell similar to that of vinegar. This gas was acetic acid; an end product in the aspirin synthesis reaction, thus the NMR spectrum of acetic acid was analyzed. It is known from the NMR spectrum of acetone, which is a reference compound with only one type of hydrogen (that belonging to CH3), that the peak at 2 PPM in the acetic acid spectrum pertains to CH3 (table 2.3). Therefore, the second peak from acetic acid pertains to the hydrogen the carboxylic acid, at 11.0 PPM. Because the NMR spectrum of the synthesized aspirin sample does not have a peak at 11.0 PPM, it can be concluded that there is no leftover acetic acid in the final product. By using acetic acid’s spectrum as a reference for salicylic acid, it is known that the peak at 10.3 PPM is probably the hydrogen belonging to the carboxylic acid in the structure. This leaves a peak at 9.1 PPM and a range of peaks from 6.7 to 8.1 PPM. Because the range of peaks matches (table 2.3), with the aromatic hydrocarbon peaks, this range must represent the hydrogen atoms present in the benzene ring, and by process of elimination, the final peak at 9.1 PPM must be the remaining hydrogen in the alcohol in the structure of salicylic acid. Because the synthesized aspirin spectrum does not have a peak at 9.1 PPM to represent alcohol or, as mentioned previously, at 10.3 PPM to represent carboxylic acid, the synthesized aspirin has no leftover salicylic acid present. From these two analyses, it can be concluded that no reactants remain in the final product aspirin, and that the functional groups present in the synthesized aspirin NMR spectrum are CH3 and aromatic hydrocarbon (benzene).

IR spectra display the wavenumbers at which reference compounds are transmitted. Looking again at the starting materials of the aspirin synthesis reaction, acetic acid and salicylic acid, each compound has one peak in the 1650 to 1850 cm-1 range on their IR spectra. Acetic acid has a peak at 1704.69 cm-1 and salicylic acid has a peak at 1652.36 cm-1. The two peaks in the 1650 to 1850 cm-1 range in the synthesized aspirin IR spectrum (figure 2.2) are at 1679.70 cm-1 and 1749.46 cm-1. Because neither of these values matches with those values on the acetic acid and salicylic acid IR spectra, it can be concluded that neither of the starting materials are present in the synthesized aspirin sample. By matching the synthesized aspirin peak at 1749.46 cm-1 to the peak values in table 2.4, it is evident that this peak represents the ester in the structure of aspirin. The remaining peak value from the synthesized aspirin is 1679.70 cm-1, which corresponds with values in both the ketone and carboxylic acid sections of table 2.4. However, looking at the structure of synthesized aspirin, the remaining component that has not been identified but is present in the structure is carboxylic acid. Thus, the peak at 1679.70 cm-1 represents a carboxylic acid.

Overall, the purpose of this lab, to synthesis aspirin and prove its purity using organic functional groups, was accomplished successfully. The final product of synthesized aspirin contained no starting materials and its molecular weight was relatively close to that of pure aspirin, thus it was almost entirely pure.