The aim of this experiment is to carry out an addition reaction using trans-stilbene and bromine reagent to produce 1,2-dibromo-1,2-diphenylethane. As most chemicals used in this experiment are toxic / harmful, PPE must be used throughout and the experiment should be carried out inside a fume hood.

MECHANSIM: The alkene, trans-stilbene, acts as a nucleophile and the bromine acts as an electrophile. Hence, the nucleophilic double bond undergoes an electrophilic addition reaction by the bromine reagent. The Br–Br bond becomes polarized and the more positively charged Br atom is transferred to the alkene to yield a bromonium ion. The addition of bromine begins at one side of the double bond (either side is equally likely, but only one option is drawn) and is followed by attack of bromide ion on the bromonium ion (again, attack could occur at either carbon since the ion is symmetric, but only one option is drawn). The result is a trans dibromide, as shown above.

stereoisomers (i.e. four optical isomers). However, there are only three possible isomers in the case of 1,2-dibromo-1,2-diphenylethane since one, the so-called meso isomer, is superimposable on its mirror image.

Experimental data was recorded in the following tables: 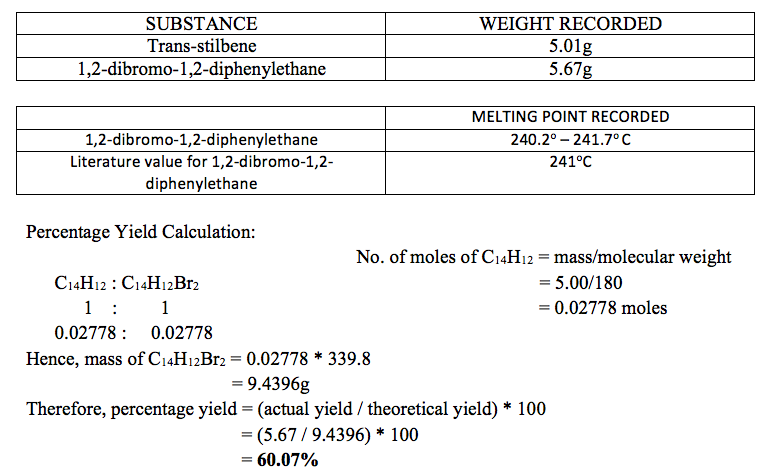