The quantities of x, y, and k can only be obtained through experimental data because they are empirical numbers.  Therefore, if these same reactions were done under different conditions than originally performed, the values may be different.  Temperature, concentrations of the reactants, impurities, and the presence of catalysts can all affect the values of x, y, and k.1

Numerous steps were completed several times during this experiment to obtain all of the data needed to compile the final rate law.  Before the experiments could be started, the solutions needed to be made.  The potassium iodide (KI) solution was made by weighing out 20.75g of KI into a beaker, dissolving that in distilled water, adding that to a 500mL volumetric flask, and then filled to the fill line on the neck with distilled water, making sure to wash the original beaker containing the KI well, to get all of the compound into solution.  The Na2S2O3 solution was made in the same manner, using 7.906g of Na2S2O3 dissolved into a beaker and then added to a separate volumetric flask.  The hydrogen peroxide (H2O2) was readily available at any drug store, and the starch solution was prepared using 1-2g of starch dissolved into 500mL of distilled water and then heated.

The main reactions were conducted in beakers, four at a time. For the first set of reactions, the volume of KI was changed, whereas in the second set of reactions, the volume of H2O2 was changed.  See the table below for exact values.  All of the reactants were placed into the beaker at the same time except the H2O2, which was added the very end, to measure the rate of the reaction.  Once the H2O2 was added, the solution was stirred and timed until the color change first appeared.  This procedure was repeated for each of the eight reactions. 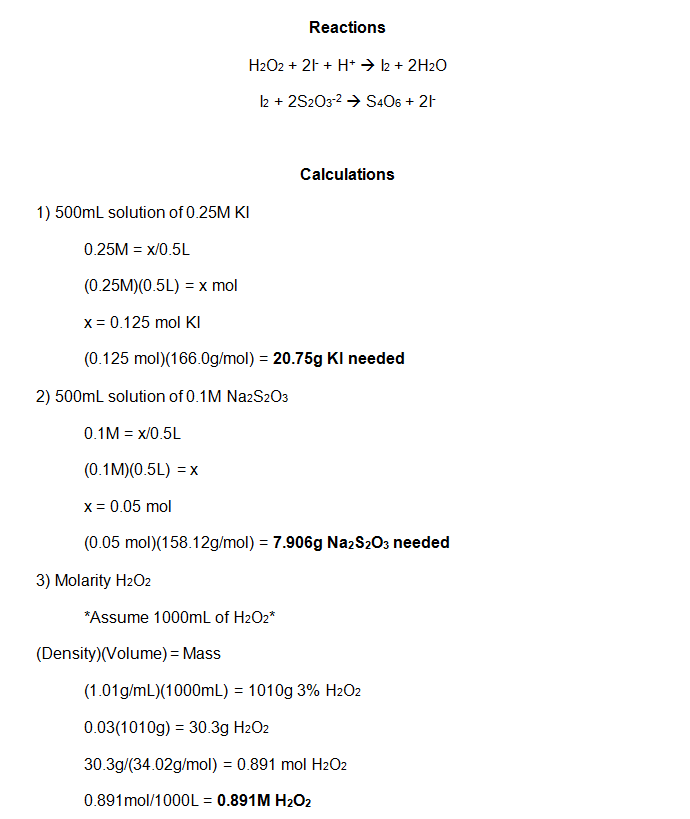 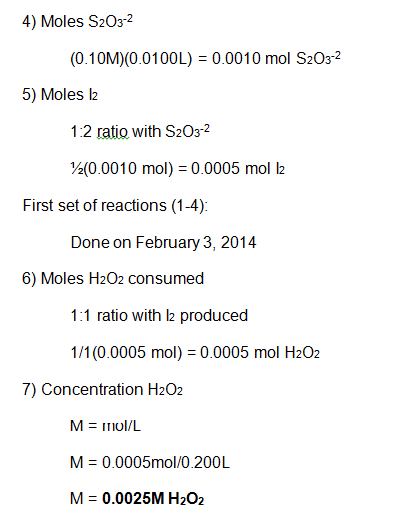 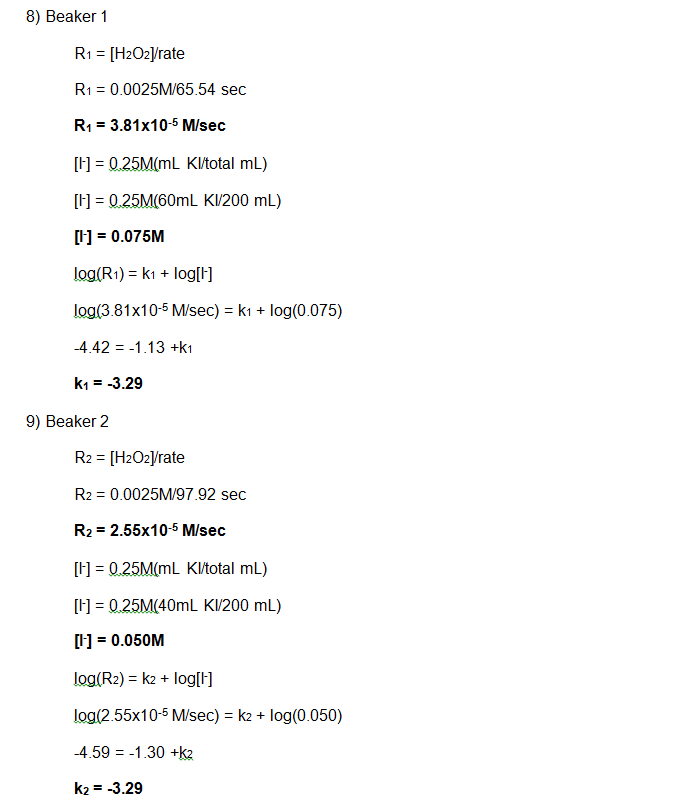 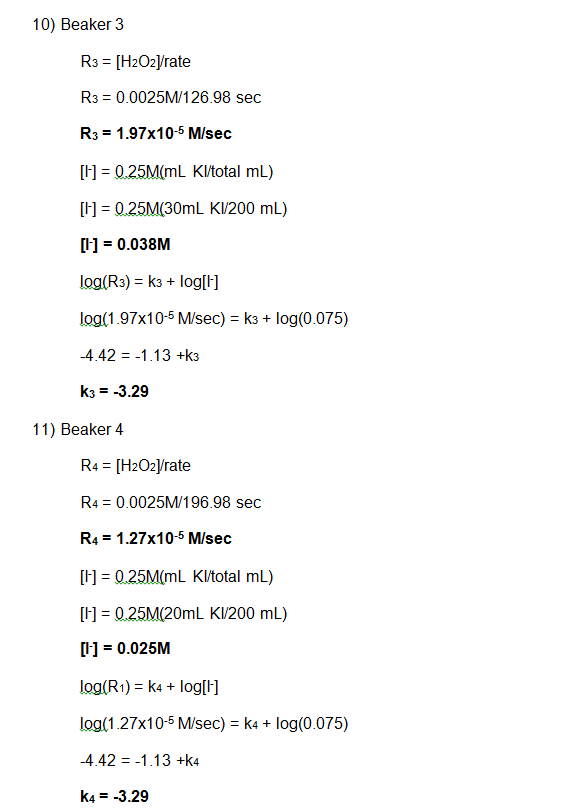 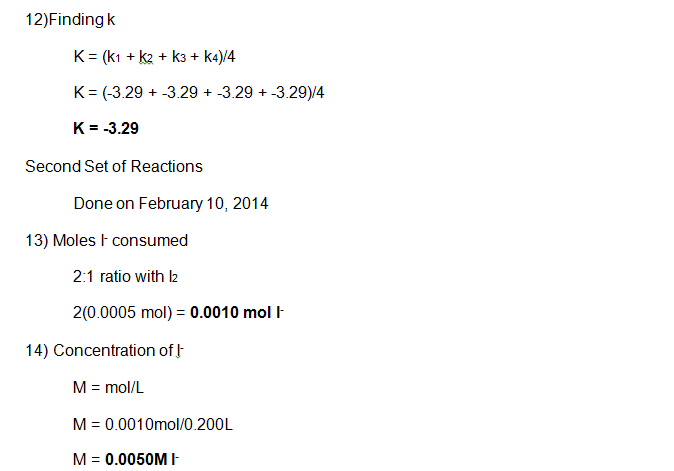 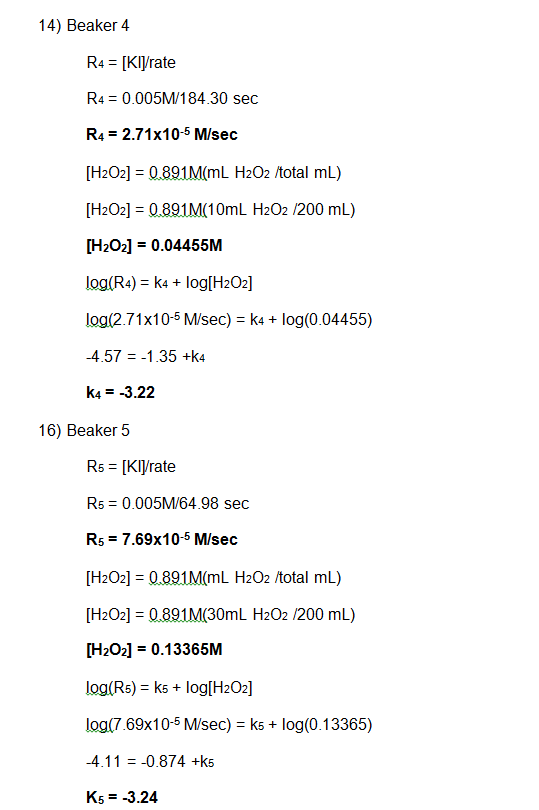 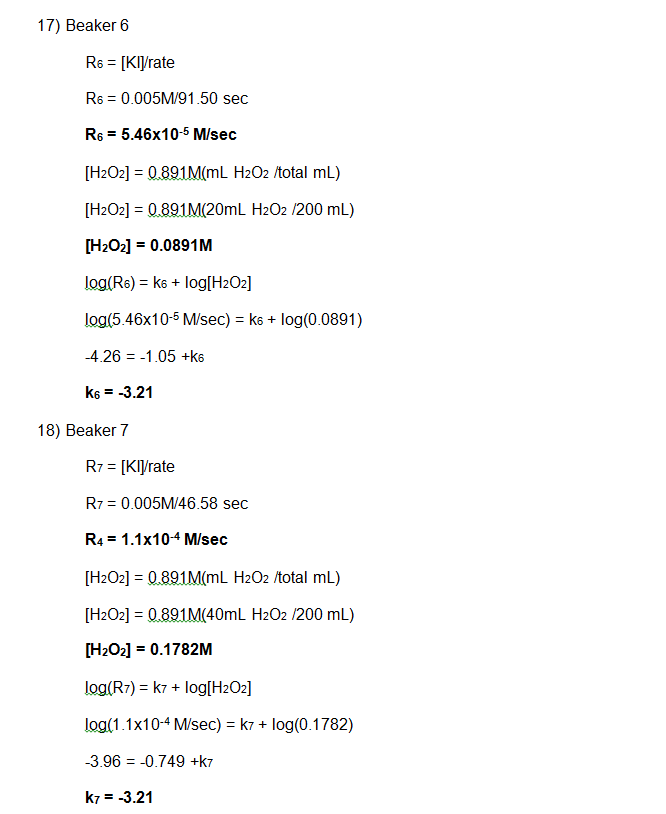 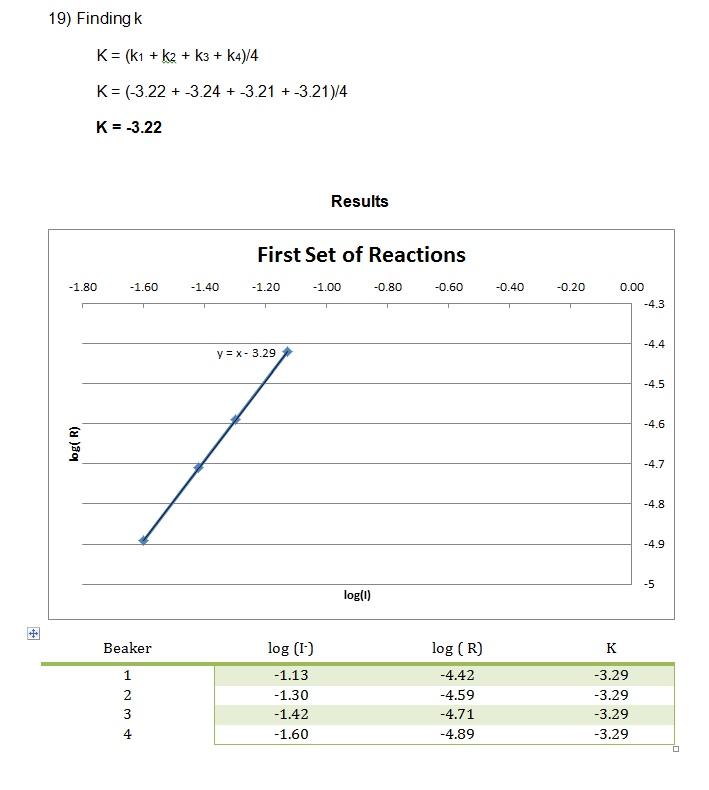 In this experiment, numerous smaller reactions were carried out to demonstrate the chemical kinetics properties of rate laws.  During this experiment, the rate was determined by how long it took to create the color change.  This color change was from colorless to blue, then yellow/brown, which is from the reaction between the iodine and the starch, very similar to the color seen in iodine antiseptic wipes.  These reactions allowed the rate to be determined, and the rate constant to be evaluated from the graph of the log( R) v. log(I–) and log( R) v. log(H2O2) respectively.  From this data, it can be concluded that the reaction has an overall order of 2 and that the I– and H2O2 both have individual orders of 1.