The Dehydration of Alcohols Experiment

The Dehydration of Alcohols Experiment

The Dehydration of Alcohols
By: Julia Trimble

Alcohols are organic compounds that derive from hydrocarbons that have replaced hydrogen with a hydroxyl group; the presence of a hydroxyl group is the primary signifier of this functional group.2  Given their structure, alcohols are capable of reacting with acids to create a more stable compound by cleaving the –OH group to make water.3  If a simple alcohol such as cyclohexanol were mixed with a strong acid like H2SO4 , the free H+ ions of the acid could protonate the –OH group to produce water.  This is only possible because water is an excellent “leaving group” because water alone is a stable molecule.3  The –OH group also contains 2 lone pairs of electrons with an affinity for hydrogen.  The reaction is as follows:

When water is removed, a tertiary carbocation is formed and the rate determining step begins.2  The negative HSO4- ion then removes a hydrogen atom from the adjacent carbon leaving 2 positively charged carbon atoms in the cyclohexanol molecule.  To become more stable, the carbon atoms form a double bond to generate a final alkene product as shown. below:

Although an alkene is eventually produced, this reaction is reversible.  Le Chatlier’s principle depicts that reactions such as these are equilibrium dependent; the conditions of both the products and reactants will drive the force of the reaction toward what is produced.2  The control this, a distillation apparatus is necessary.  The boiling points of the reactants are comparatively higher than those of the products.3  Therefore, heat can be used to distill the product from the solution so that the reaction will always favor the product so long as the temperature is controlled to remove the product alone.  Given that the reaction occurs between compounds of differing boiling points, the solution can become azeotropic where the temperature thresholds of each solution can fluctuate in the presence of other compounds; this could potentially limit the yield of the final product.3

The final product would then be a cycloalkene and remaining acids that may have distilled into the new solution.  The solution can be neutralized using a weak base such as sodium carbonate.4  The free H+ will be absorbed to produce the inorganic compound, carbonic acid.  Using a separatory funnel, the organic and inorganic solutions can be isolated from one another, yielding cyclohexene alone.4  The cyclohexene can be placed into an infrared spectrometer where the proton energy absorbed by the molecule can be measured.  Certain bands are indicative of functional groups within the compound; these functional groups then allow one to identify and name the final product.

To begin the experiment, 10 mL of cyclohexanol along with 3.0 mL of phosphoric acid and 2.0 mL of sulfuric acid were added to a 100mL round bottom flask.4  This flask was inserted into a distillation apparatus with a heating mantle placed just below the flask.  The heat of the flask was increased based on the rate that condensation traveled through the glassware.  When the condensation passed reached the end of the apparatus and white smoke appeared in the flask, the reaction was complete.  The collecting 50 mL round bottom flask was removed from the heating mantle and allowed to cool.  Approximately 10mL of sodium carbonate was then poured directly into the round bottom flask and swirled.5  The solution was decanted into a separatory funnel and shaken vigorously with a release of pressure following every inversion of the funnel.  When the solutions were completely separated, the aqueous bottom layer was released into a collection beaker.  Litmus paper was used to assure that the removed solution was neutralized by the sodium carbonate.  The remaining cyclohexene was then drained from the separatory funnel into a 125 mL Erlenmeyer flask containing 2 g of anhydrous calcium chloride and later corked.5  After sitting for 10 minutes, the cyclohexene was placed into a second distillation apparatus.  The solution was heated until only a viscous white liquid was left.  The distilled product was drained into a pre-weighed 50 mL round bottom flask with a cork.4  The solution was weighed to calculate the yield and the product was collected to analyze via infrared spectrometry. 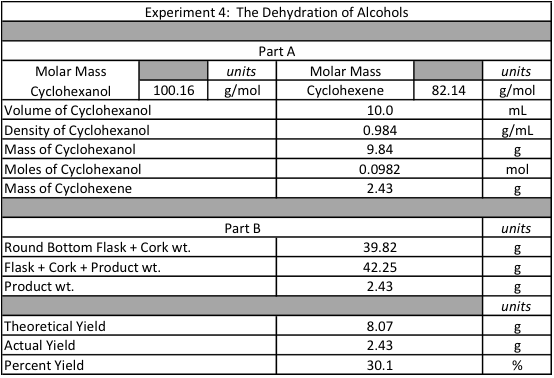 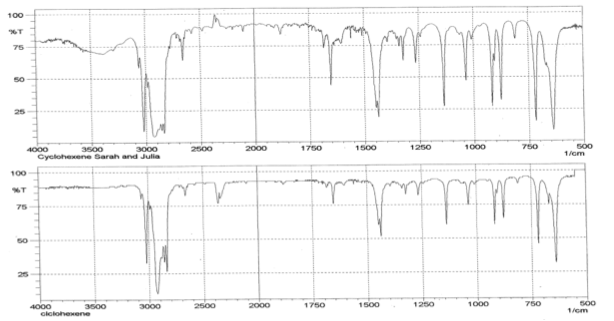 In the beginning of the experiment, 10 mL of cyclohexanol, 3.0 mL of phosphoric acid, and 2.0 mL of sulfuric acid were combined into a 100 mL round bottom flask.  The combination of these 3 liquids produced a dark orange and yellow color.  Prior to placing into the heating mantle, the round bottom flask developed condensation around the sides as the liquids were volatile enough to escape into the gaseous phase.  When the solution was heated, the orange color faded into a dark, grassy green color.  The liquid started to decrease in volume and deposit a dark solid substance on the edge of the pooled liquid.  The extract in the small 50 mL collection round bottom flask was white and cloudy as a result of impurities.  Both the distillation and collection flasks let off a strong odor during the reaction.  When the reaction was finished, thick white smoke appeared in the 100 mL round bottom flask as the sulfuric acid was affected by the heat.  The collection flask was removed and filled with 10 mL of sodium carbonate.  When the two were mixed, they were poured into a separatory funnel.  Immediately, the organic and inorganic parts of each solution started to separate from one another.  The reaction in the separatory funnel built up pressure that had to be released upon each shake and inversion of the funnel.  The top layer of cyclohexene was very cloudy and looked similar to bubbles while the bottom layer was aqueous and clear.  When the inorganic bottom layer was removed, litmus paper was used to test that the solution was basic.  The foamy top layer of organic cyclohexene was released into a 125 mL Erlenmeyer flask with 2.0 g of anhydrous calcium chloride.  After 10 minutes of waiting, the solution remained a cloudy white color.  Prior to placing into the Part B preset distillation apparatus, the new 50 mL round bottom collection flask along with a cork were weighed at 39.82 g.  When the distillation process was repeated, only a viscous, soapy layer was left in the bottom of the 100 mL distillation flask while a new, more transparent liquid was left in the collection flask.  After the reaction, the flask was weighed at 42.25 g yielding a product weight of 2.43 g.  Given that the density of cyclohexene is 0.984 g/mL and the initial volume of cyclohexene was 10.0 mL.  Through density and volume, the theoretical mass of cyclohexene would be 8.07 g.  In comparison with the actual yield of 2.43 g, the percent yield of cyclohexene is 30.1%.

Infrared Spectrometry analysis shows that according to the database, 954 times out of 1000, the product inputted into the spectrometer was cyclohexene.  The spectrometer analyzed the bond energies of functional groups in cyclohexane by measuring the photon energy absorbed in a frequency range from 400 to 4000 1/s.  The individual spikes of the graph indicated 2 large spikes around 3000 1/s.  The wider stretch represents the C-H bond while the narrower spike is indicative of the special C-H bonds of alkenes.  The continuing spikes beyond 1500 1/s represent the other CH2 bonds that make up the cyclohexene molecule.  The other recognizable spike is a U-shaped bend located at 3500 1/s that represents the presence of OH caused by water.

Dehydration of an alcohol is an elimination reaction based on states of equilibrium; therefore, the yield of the final products will never be 100%.  Provided that the initial mass of cyclohexanol was 9.84 g while the final product of cyclohexene was only 2.43 g, the 30.1% yield is expected.  The lesser yield was due to a multitude of error sources.  One of these sources was the distillation apparatus itself.  During the distillation process, the product traveled through a lot of glassware including the 3 way adapter and the water column.  Considering that the extract was in the aqueous phase, the adhesive properties of water caused some of the product to attach to the sides of the glassware rather than collect in the 50 mL round bottom collection flask.  There was a small volume of reactants to begin with; therefore any amount of product left behind had a large impact in yield.  Another source of error was in the separation of the organic and inorganic solutions.  While draining the inorganic bottom layer from the separatory funnel, a small volume of the organic cyclohexene escaped into the collection flask.  This lost volume caused a further decrease in product yield.  Contrary to this, the yield may have been mistakenly increased through the presence of cyclohexnaol and other distilled products.  When the phosphoric acid, sulfuric acid, and cyclohexanol were mixed they became azeotropic, a solution where the boiling points of individual solutes fluctuate in the presence of other solutes with differing boiling points.  When this solution was produced, some of the solutions that were not meant to distill may have distilled through the influence of the azeotropic solution.  There could have also been water left behind after the distillation process if the 100 mL round bottom flask contained water that evaporated into the collection flask.  This may not have been completely absorbed by the calcium chloride, causing an unexpected increase in yield.

Based on infrared spectrometry, the purity of the cyclohexene solution is unknown.  This frequency analysis does not provide purity, however it can depict the probability that the observed product is what is expected.  The spectrometer found that 954 times out of 1000 the given product was cyclohexene.  The cyclohexene product was recognized by the appearance of certain spikes around 3000 1/Hz.  The first was a wide stretch that represents the multiple C-H bonds present in molecule.  The second was a much narrower spike that also appears from C-H bonds; these are specific to alkenes due to the increased intensity of the spike.