Effects of Substituents on the Absorption Spectra of molecules

Effects of Substituents on the Absorption Spectra of molecules

The objective of this lab was the observation of the effects of substituents on the absorption spectra of molecules (most specifically azulene). ChemDraw 3D was used to visualize the electron densities and energies of the HOMO and LUMO states of several molecules. Then, the absorption spectra of several chemicals—including azulene, mono-substituted azulenes, and poly-substituted azulenes—were obtained using spectrophotometers, and these absorption spectra were compared. These spectra allowed the explanation of shifts in HOMO and LUMO states in context with Electron Donating Groups and Electron Withdrawing Groups.

Molecular Orbital theory plays an important part in this experiment. This theory, which involves the Linear Combination of Atomic Orbitals, is the idea that the electron orbitals of a molecule are different from those of the separate atoms. This suggests that the molecules have their own electron orbitals, which can be found by combining the atomic orbitals mathematically with the Schrödinger equation. These molecular orbitals fill much the same way as atomic orbitals do: only two electrons in each orbital, opposite spin. 1

The molecular orbitals on the outside of the molecule are called the Frontier Orbitals. These orbitals, the HOMO and LUMO, often play a large role in reactivity and absorption/transmission spectra. The HOMO is the Highest Occupied Molecular Orbital, which means the highest orbital in which electrons are found in the ground state. The LUMO is the Lowest Unoccupied Molecular Orbital, which is the electron orbital just above the HOMO. Because of the electronic interaction between these two orbitals, one of the most effective ways to evaluate these orbitals is the use of spectrophotometry. The maximum wavelength absorbed during these tests marks the energy difference between these two orbitals. 2

The molecules observed in this experiment were aromatic molecules. Molecules exhibit aromaticity when they possess alternating double bonds in a cyclic pattern. These double bonds tend to represent electrons which are delocalized, meaning that they traverse the whole of the molecule. Aromaticity describes how the structure in question is stronger and more stable than the conjugation of the bonds would inherently suggest. 2

Two molecules of this experiment actually have the same molecular formula (C10H8), but different structures. These isomers, naphthalene and azulene, exemplify a significant difference in structure. Naphthalene is known as a benzenoid structure. These molecules are those resembling the structure of benzene, which features six-carbon rings. Azulene, on the other hand, consists of one ring of five and another ring of seven carbon atoms. This makes azulene a non-benzenoid molecule. 2

An important concept to know when considering substituents with a molecule such as azulene is how the placement of these substituents affect the molecules. The mnemonic device HOLE is used to this effect: HOMO Odd, LUMO Even. This means that a substituent which is attached to an odd carbon affects its HOMO; a substituent attached to an even carbon affects its LUMO. This paired with the explanations of the effects of EDGs and EWGs can help with the understanding of the shift in absorption spectra seen in the experiment.

ChemDraw 3D was used again to model the azulene molecules with substituents: 1-nitroazulene, 4-isocyanoazulene, 5-formamidoazulene, and 2-aminoazulene. Pictures were both sketched and saved to the computer for future reference. Their energies were minimized and HOMO and LUMO energies recorded. The differences of these energies were again found.

Four cuvettes were then obtained, containing 1-nitroazulene, 4-isocyanoazulene, 5-formamidoazulene, and 2-aminoazulene. Their Lewis structures were drawn, then their colors recorded and their absorbance spectra obtained using the spectrophotometer. The lowest energy peak, or max wavelength, of the absorbance spectra was recorded, and pictures of each spectrum were saved for future reference, and then sketched. The effects of the substituents on the azulene molecules was discussed. (See Conclusion)

The absorbance spectra were saved for future reference, as well as sketched. Prior to the use of the spectrophotometer, predictions were made concerning the color shift the solution would exhibit (red or blue). Also, the max wavelength and the actual shift was recorded for each of the compounds.

Table 1     The maximum wavelengths of the absorptions of several chemicals.

Figure 1   The relative electron densities of the HOMO and LUMO orbitals of a non-substituted azulene molecule.3

Table 3     The results of Week 2 of the experiment, involving poly-substituted azulenes 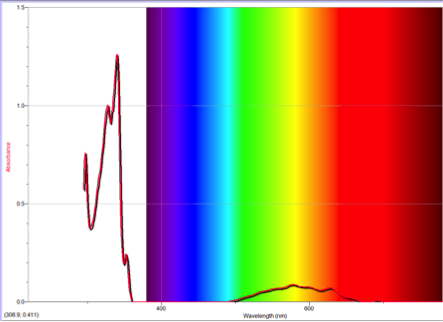 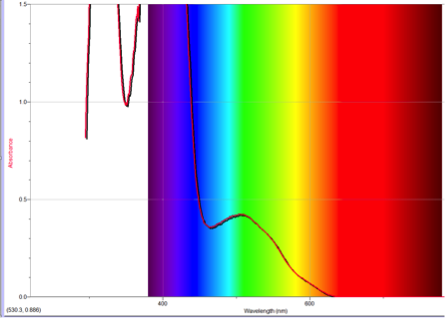 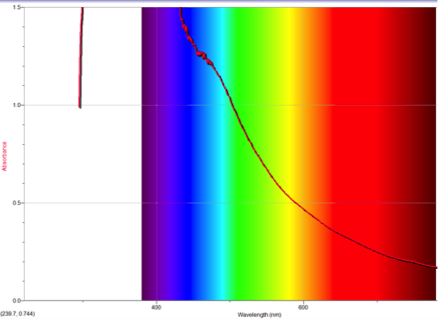 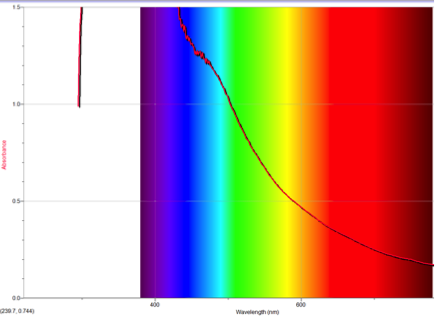 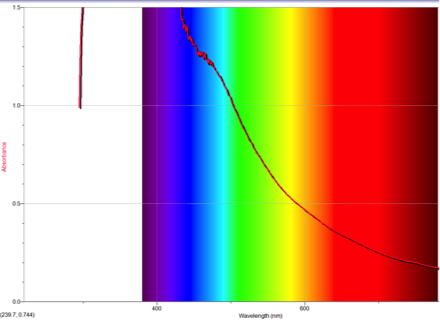 One of the many important differences between naphthalene and azulene is their HOMO and LUMO electron densities. Naphthalene’s electron densities lie along similar planes in different molecular orbitals. This means that the electrons of naphthalene experience more repulsion from each other than those of azulene, whose HOMO and LUMO densities alternate between odd and even placements (Figure 1). This increased repulsion causes an S0-S1 gap whose emitted wavelength falls outside human vision.

Substituents alter the emitted wavelengths of these molecules by affecting the electron densities. Electron Withdrawing Groups (or EWGs) withdraw electron density, thereby making the arrangement more stable. The energy level of the orbital affected subsequently lowers, causing a typically-noticeable red shift in the maximum wavelength. Alternately, Electron Donating Groups (EDGs, for short), add to the electron densities of the molecule. This causes the affected orbital to be less stable, and requires more energy to obtain. The orbital affected depends on the placement of the substituent. A useful mnemonic device in this matter is HOLE: HOMO Odd, LUMO Even. This explains that the affected orbital alternates between odd and even placements.

Table 4 A summarization of the effects of certain substituents on the spectra based upon their placement.

To understand this concept, an evaluation of the absorption spectra would be helpful. Consider Figures 2, 3, and 4 (Results section), which compare the absorption spectra of a non-substituted azulene and an azulene molecule with Electron Withdrawing Groups on either an odd or even position. Note that the spectrum of 1-nitroazulene possesses a blue shift, while the spectrum of 4-isocyanoazulene experiences a red shift in comparison to the spectrum of non-substituted azulene. (See Table 1 for maximum wavelengths of “original” molecules.)

These effects can be compounded within a single molecule, as in the case of seven of the multi-substituted azulenes in the experiment. Table 3 shows related data. Explanations for the effects of each of these molecules follow.

6-amino-1,2,3-triphenyl azulene experienced a blue shift, which contradicted the prediction of a red shift. However, this result is explainable. The phenyl substituents, which were EDGs, on odds would have forced the HOMO up, while the phenyl substituent on even would have pushed the LUMO up as well. The amino is also an EDG, which would have pushed the LUMO up, additionally. The blue shift suggests that the energy gap increased, so the LUMO was affected more strongly. This means that the formamido must be a stronger EDG than phenyl.

6-formamido-1,2,3-triphenyl azulene also experienced a blue shift, which negated the red shift of the prediction. This, however, is perfectly in line with what the concepts this lab cover. The two EDG phenyl’s on odd would force the HOMO up, while two EDGs (one phenyl and one formamido) on even would also force the LUMO up. Since there was a blue shift, it can be inferred that the energy gap increased. This means that the LUMO was affected more, suggesting that formamido is a stronger EDG than phenyl.

6-isocyano-1,2,3-triphenyl azulene experienced a red shift, which confirms the corresponding prediction. The two EDG phenyls would cause the HOMO to move up; one EDG phenyl on even would force the LUMO down while the one EWG isocyano oneven would force the LUMO up. Since one phenyl on odd and one phenyl on even “cancel out”, the remaining forces cause the levels to move closer. This corresponds with a red shift.

The phenyl group of multisubstituted azulenes offers some interesting comparisons. Because the maximum wavelength of 6-amino-1,2,3-triphenyl azulene is 480 nm and the max wavelength of 6-formamido-1,2,3-triphenyl azulene is 675 nm, it can be assumed that the effect of the amino is stronger than that of the formamido. The energy difference was greater, causing a more significant blue shift. Because isocyano is a withdrawing group, it had a smaller gap, causing a red shift, and is therefore more difficult to compare qualitatively with the other two.

4,6,8-trimethyl-1-nitro azulene experienced a blue shift, which corresponds with the predicted shift. An EWG on odd would cause the HOMO to shift down while three EDG on even would cause the LUMO to shift up. This leads to a much larger gap between HOMO and LUMO, which would account for the blue shift that was observed.

1,3-azulenyldicarboxylic acid experienced a blue shift, which is consistent with the prediction. Because two EWGs on odd positions would cause the HOMO to lower, the energy gap between the HOMO and the LUMO would increase. This translates into the observed blue shift.

This experiment provided some opportunity for error. For one, a miscalibration of the spectrophotometer or the misreading of the spectra could have led to false data, which would alter results by providing incorrect shifts. Also, it isn’t absolutely certain that the cuvettes used had only pure substances inside. It’s possible that they were contaminated with other chemicals, which would alter the absorption spectra, as well. This would also adversely affect the shifts observed.

The goal of this experiment was the observation and explanation of the effects of substituents on azulene. For this purpose, the HOMO and LUMO of several comparable molecules were observed using ChemDraw 3D. Then, the absorption spectra of several mono- and poly-substituted azulenes were collected, and the shift in maximum wavelengths used to achieve this end.

Spectroscopy was an acceptable method of testing the effects of substituents on azulene for a number of reasons. First, it would enable the observation of the maximum wavelength absorbed, which indicates the energy difference of the HOMO and LUMO of the molecule in question. Comparisons using these maximum wavelengths are relative, but relatively easy to make, which also led to its use.

The case becomes slightly more complicated in the second part of the experiment involving poly-substituted molecules. However, this portion of the experiment provided the substituents’ identities (EWG or EDG), so what remained was the determination of which interactions were present. In the case of the phenyl solutions, a comparison was made of the remaining substituent. The same goes for the methyl/trimethyl solution.

It was found in part one of the experiment that nitro and isocyano were Electron Withdrawing Groups, and formamido and amino were Electron Donating Groups. These were found by comparing the shift in absorption spectra to that of “plain” azulene. A blue shift on odd and a red shift on even (as in the first instance) suggested an Electron Withdrawing Group. A red shift on odd and a blue shift on even (as in the second) suggested an Electron Donating Group. These results and understandings contributed to the second portion of the experiment.

Several of the predictions of the color shift of the poly-substituted azulenes were correct; however, the first few were incorrect. This was an error in understanding of the experimenters, who were factoring the S2 energy level (or LUMO+1) in the prediction, which should have been discounted. Otherwise, the understanding of the concepts and the knowledge of which groups were EDGs and EWGs in part two of the experiment to largely successful predictions. Several important observations include the following: amino is a stronger EDG than phenyl, formamido is a stronger EDG than phenyl, tert-butyls are stronger groups than an isocyano, and overall, the effects of EDGs and EWGs are compounded within a molecule.