First, one sample of anhydrous, between 7 and 8 grams, and one sample of hydrate, between 15.3 and 15.4 grams, were measured out to four significant figures. Then, a weighed polystyrene cup was obtained and filled with 100 mL of distilled water. The thermometer attached to the Palm Pilot was then placed in the water and allowed to obtain measurements for 5 minutes. After five minutes, the anhydrous was rapidly added to the water, which was constantly being stirred, and allowed to react for an additional 8 minutes, or until the temperature became pretty constant. The Palm Pilot recorded the temperature every thirty seconds during this time period. The same process was repeated with the hydrate, using new distilled water. 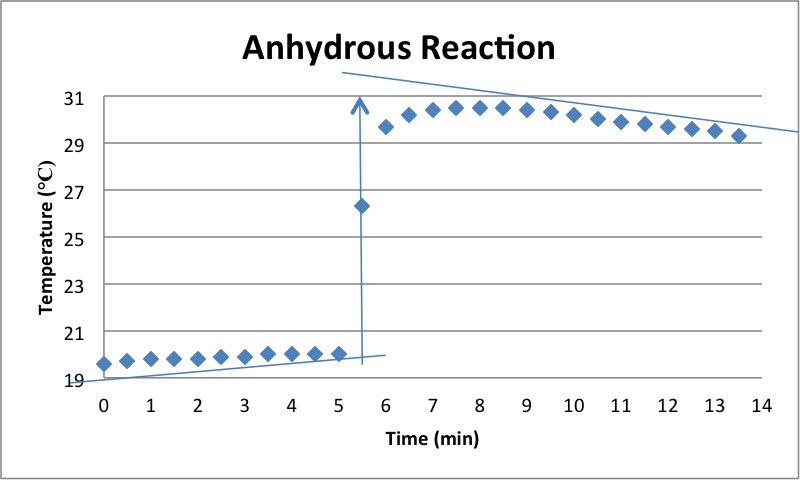 The graph above shows the change in temperature over a 14-minute time period for the reaction of the anhydrous magnesium sulfate. The jump in the graph represents the time at which the anhydrous was added to the distilled water. The water eventually started cooling back down after it heated up due to the dissolution of the anhydrous that was added to the water. The increase in temperature indicates that the reaction involved is exothermic, thus releasing energy and heating up. The temperature change over the whole reaction was 9.7 °C. This number was then plugged into the equation Q=-CΔT, where Q is the heat change, C is the heat capacity of the system, and ΔT is the observed temperature change. The heat capacity of the system was found by multiplying the mass of the anhydrous plus the mass of the water, 107.634 g, by the specific heat of the mixture, 3.84 J/g°C. Once heat capacity was calculated, it was plugged into the equation above. The calculated heat change of the reaction was -4009.15 J. This number was then divided by the number of moles of solute to find the enthalpy of dissolution, which ended up being -63.21 kJ/mol. 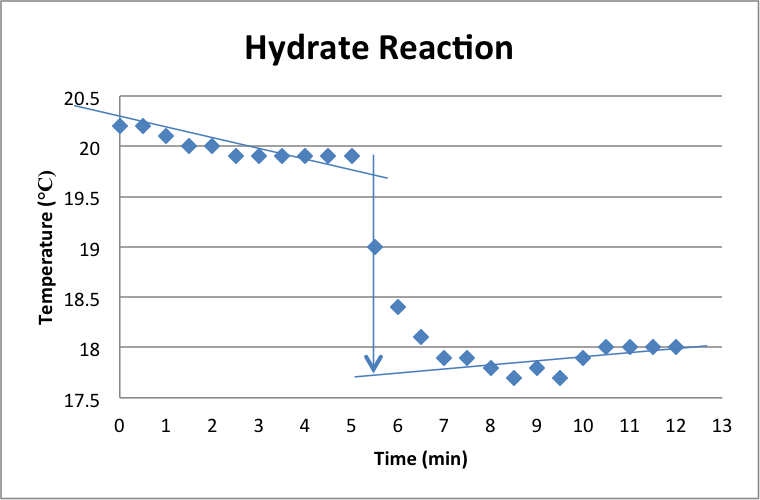 The experiment performed, Enthalpy of Hydration, was used to determine the enthalpy of hydration of an anhydrous magnesium sulfate sample. This was found by measuring the temperature change over a period of time for a reaction of water and the anhydrous sample, as well as the reaction of a hydrated magnesium sulfate sample. The end result yielded the enthalpy of -78.86 kJ/mol. There are no known exact enthalpies of hydration, due to the fact that they are difficult to measure directly.