Esterification of Benzocaine
By: Nick Makowski and Monica Schaeffer

Purpose:
To practice the techniques of refluxing and vacuum filtration to perform an esterification reaction to create benzocaine from p-aminobenzoic acid 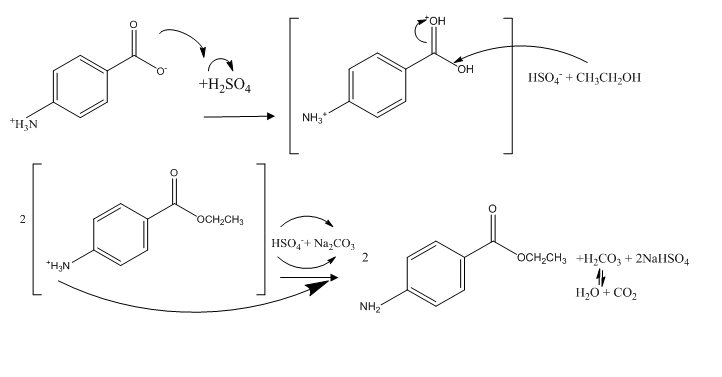 After ethanol and sulfuric acid added to p-aminobenzoic acid, solution became clumpy and then turned into a white foam

1)      Because the product had a different Rf value than the starting product, the benzocaine is obviously not still p-aminobenzoic acid. Also, as the dots were fairly distinct, it seems to lead to the conclusion that there is no evidence that there is presence of the starting material in the reaction product.

2)      The experimentally determined melting point tells us that our product is very pure. It was within the narrow range of the known melting point for our product, which indicates purity of our substance.

It seems we were successful in producing benzocaine by esterification based on results of melting point, IR spectroscopy, and TLC analysis. The melting point we received was within the range of the known melting point. Also, the TLC analysis produced two distinct, different-valued points that were obviously different substances. IR spectroscopy showed similar, but distinct products. We did not have any problems during this experiment. These results indicated that we had a pure product.