An Exploration of Antibiotic Sensitivity & Resistance

An Exploration of Antibiotic Sensitivity & Resistance

An Exploration of Antibiotic Sensitivity & Resistance
By: Tyler Ryan

Understanding antibiotics is crucial to the world of medicine and biology. Antibiotics are a type of medicine used to target and kill bacterial cell infections. A growing issue of concern is that bacteria cells are becoming resistant, or unaffected, by current antibiotics. This makes bacterial infections a much more serious issue. Research has shown that overusing antibiotics is the primary cause for antibiotic resistance (Solomon Berg and Martin 2011, 534). Due to their ability to mutate and reproduce quickly, bacteria cells that are able to survive antibiotics pass on the genetic material to spread the infection. Now, the majority of the population of the bacterial cells are resistant to the antibiotic and the infection is difficult to treat. A closer look at the chemistry of a bacteria cell can give us more information on how to treat them with antibiotics.

The procedure that was followed for this experiment was similar to the techniques a lab technician and a physician would follow. This procedure is known as Gram staining. First, a Petri dish containing the culture of isolate from patient B was obtained. Using a sterile swab, the culture of isolate was evenly spread on a Mueller Hinton agar plate and then repeated on a second plate. Dipping forceps in alcohol before each use to sterilize, place the antibiotic tabs in the plate following the diagram. On the bottom of the plate, use a marker to divide the plate into sections along the dotted line in the following figure. 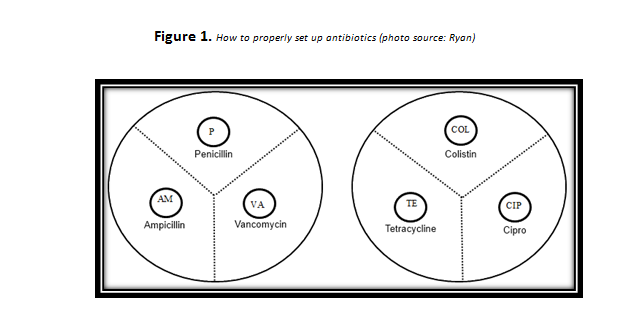 Once the plates have been carefully incubated, use a ruler to measure the diameter of the circle that has appeared around each tab. Record the measurements in a table.

First, Colistin, the only Gram-negative antibiotic, yielded a 1mm killing zone proving that the bacteria were resistant to it. The narrow, Gram-positive antibiotics, Penicillin and Vancomycin, proved to be more effective that Colistin with killing zones of 30mm and 25mm respectively. The bacteria were sensitive to these antibiotics. The broad antibiotics used were Ampicillin, Cipro and Tetracycline. On average, these broad antibiotics performed on par, if not better than the narrow antibiotics with killing zones of 32mm, 30mm and 25mm respectively. The data collected from this experiment has proven the hypothesis to be correct. See the following figure.

Figure 2. This table shows the killing zones (mm) of each antibiotic. (Note, the data for patient A was recorded from another group.)

This was an important experiment because it gives you an insight to the importance of antibiotics in the medical field. Careful experimentation must be used to determine what type of bacteria the infection is. The importance of this is because physicians need to understand how bacteria are different and how they respond to antibiotics. By understanding the principles of bacteria and antibiotics physicians can then learn how to make sure infection related deaths are lowered and antibiotic resistance is minimized.