Synthesis of and Fabric Test for Methyl Orange, and an Investigation of Acid-Base Properties of Textile Dyes

Synthesis of and Fabric Test for Methyl Orange, and an Investigation of Acid-Base Properties of Textile Dyes

Synthesis of and Fabric Test for Methyl Orange, and an Investigation of Acid-Base Properties of Textile Dyes
By: Nick Fastuca

The azo-dye methyl orange was synthesized in two steps from sulfanilic acid and n,n-dimethylaniline with 52% yield. The reaction product was purified by recrystallization with water as the solvent. The synthesized methyl orange was tested to see how well it dyed 13 different kinds of fabric using a piece of Multifiber #43 cloth.  The dye bound most strongly to wool worsted, silk, and polyamide nylon 6.6, all of which are amides.  After dyeing, these fabrics showed a strong color which persisted after washing with soap and water.  The dye did not bind as strongly to fabrics with less polar groups.  The acid-base and solubility properties of various textile dyes were studied via a series of acid-base extractions and the components of an unknown mixture of dyes (unknown #10) was identified as a mixture of toluidine blue, brilliant green, and bromocresol purple.

Azo dyes are organic compounds with an R-N=N-R’ group and long chains of conjugation which allows them to be chromophores.  They are used for dyeing textiles, as artificial coloring in food, and as acid-base indicators.  Azo dyes can adopt different forms depending on the pH of the solution they are in, causing a change in the conjugation of π-bonds which, in turn, causes the observed color to change.  Nisal et al experimented with supplementing the feed of silkworm larvae with a variety of azo dyes with the aim of having them produce colored silk cocoons. They were successful in getting the silkworms to produce colored cocoons with some dyes but not others.  The success or failure of a dye to become naturally bound to the silk depended on the intermolecular forces exhibited by the dyes and the biological pathway to get the dye to the silk glands of the silkworms.  The success of this project will allow for more environmentally friendly dyeing of silk since a wasteful bath of dye for the silk will no longer be needed1.

Methyl orange, which was synthesized in this project, has different abilities to bind to different types of fabric.  The dye may bind to a fabric by forming a chemical bond with the fabric or by intermolecular forces. Methyl orange was synthesized in two steps, first by diazotizing sulfanilic acid (1) sodium salt using sodium nitrite and acid to form diazotized sulfanilic acid (2) (Scheme 1) and then reacting 2 with n,n-dimethylaniline (3) to form methyl orange sodium salt (4) (Scheme 2).  The product was purified by recrystallization with water as the solvent.

The synthesized methyl orange has acid-base properties which affect its appearance at different pHs.  Other dyes have similar acid-base interactions that cause changes in color.  These interactions also affect the dyes’ solubility in water and organic solvent.  This effect allows the dyes to be separated from each other via acid-base extractions.  Charged species are water soluble while neutral species are more soluble in an organic phase.  Three-component unknown mixture #10 was separated into its components by acid-base extraction.

Diazotization of sulfanilic acid (1) by Scheme 1 proceeded easily as diazotized sulfanilic acid (2) formed within 1-2 minutes and precipitated as a powdery white solid.  The reaction mixture was not purified and was used right away in Scheme 2. 2 is only stable for a few hours, therefore it should be used shortly after it is synthesized.

n,n-dimethylaniline (3) was added to the crude reaction mixture from Scheme 1 and after about 5 minutes a thick red paste had formed. Upon addition of base, the product instantly turned orange and began to solubilize.  The crude product was a deep red color.

Many dyes have acid-base properties which can cause a change in color as pH changes.  Many of these dyes are used as pH indicators for this reason.  Depending on the pH, the dye may become protonated or deprotonated, which will give the molecule a charge.  Charged organic molecules will be more soluble in an aqueous phase than an organic phase and vice versa for neutral molecules. To separate an organic acid, an organic base, and a neutral organic compound, an acid-base extraction can be used. 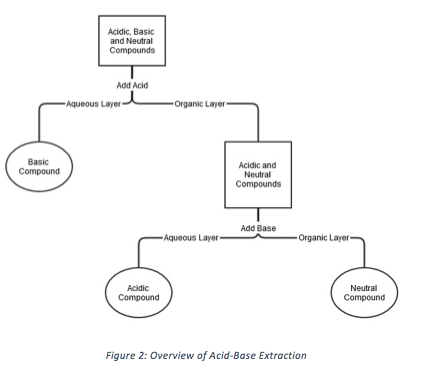 By following the process outlined in Figure 2, the three components of unknown #10 were separated and determined to be toluidine blue, bromocresol purple, and brilliant green by using the information from Table 1. Figure 3 shows the acid-base extraction process applied to unknown #10. 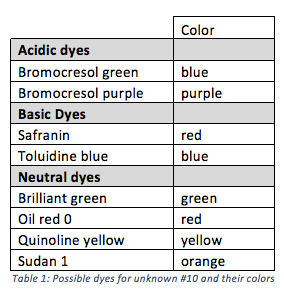 The color change of 4 from red to orange when the solution is changed from acidic to basic can be explained by analyzing the stable forms of 4 in each condition (Figure 1).  In basic media, the alkali stable form of 4 persists and has conjugation all the way across the molecule.  This form is orange in color, which means it absorbs blue light.  The acid stable form of 4 gains a proton on one of the double bonded nitrogen atoms, reducing the R-N=N-R’ bond down to a single bond, and breaking the chain of conjugation.  This form appears red, meaning it absorbs green light.  This result is as would be expected as a reduction in the length of the conjugation chain should result in a lower energy absorption, so a bathochromic shift in absorption occurs.

Further experimentation may be done to find ways to bind methyl orange to the fabrics it did not bond strongly to.  This would allow for additional application of methyl orange as an effective textile dye.  Another experiment could be to try and dye fabric in a basic dye bath instead of an acidic one to see if methyl orange binds differently to any fabrics.

Methyl orange was successfully synthesized in two steps from sulfanilic acid sodium salt, sodium nitrite, and n,n-dimethylaniline with 52% yield.  The product was successfully purified by recrystallization with water as the solvent.  The synthesized methyl orange was used to test how well it binds to 13 different fabrics.  The dye binds the strongest with polyamides, specifically wool worsted, silk, and nylon 6.6.  Unknown three-component dye mixture #10 was separated effectively by acid-base extraction.  The three components were identified as toluidine blue, bromocresol purple, and brilliant green.

Sulfanilic acid sodium salt (2.698 g, 13.8 mmol) was dissolved in 25 mL of distilled water. Sodium nitrite (0.966 g, 14.0 mmol) was added to the sulfanilic acid sodium salt solution.  This solution was poured over 15.319 g of ice.  12 M hydrochloric acid (2.5 mL, 30 mmol) was added to the solution.  Reaction ran for ~1 minute when a powdery white precipitate began to form.  The product, diazotized sulfanilic acid, was not purified and was used immediately in the second step of Methyl Orange Synthesis.

n,n-dimethylaniline (1.6 mL, 12.6 mmol) and glacial acetic acid (1.25 mL) were added to the crude diazotized sulfanilic acid product.  The solution was stirred.  The reaction ran for ~5 minutes, until a red paste formed.  3M NaOH (18 mL) was added to the reaction mixture, which was then heated near its boiling point.  At this point, the product turned orange and began to dissolve again. The crude product was precipitated out in an ice bath, filtered, and dried. Crude mass: 6.374 g.  Product was purified by recrystallization in water, dry mass: 2.158 g (theoretical yield: 4.12 g).

15 mL of distilled water, 3M sodium sulfate (0.5 mL), 3M sulfuric acid (5 drops), and methyl orange (0.051 g) were combined and heated near the boiling point of the solution.  A piece of Multifiber #43 cloth was added to the dye bath and soaked while the solution was near its boiling point for 5 minutes.  The fabric was then washed with soap and water.