As derivatives of carboxylic acids, esters are abundant compounds that often contribute to the fragrances in flowers, fruits, and coffee.  Esters are synthesized from either organic or inorganic acids through a process called esterification.2  In this reaction, a carboxylic acid (RCOOH) and an alcohol (R’OH) mix in the presence of a strong acid catalyst to form a neutral, water-insoluble ester (RCOO’R) that gives off a pleasant smell.3  The following is an example of this reaction:

The reaction above represents the formation of 3-methylbutyl ethanoate from ethanoic acid, 3-methylbutanol, and an acid catalyst.  For this equilibrium reaction to occur, the solution would need to be refluxed until the maximum rate of equilibrium is achieved in order to yield the highest amount of ester; this would require a reflux condenser apparatus and a source of heat such as a heating mantle.3  Although Le Chatlier’s principle states that this reaction is reversible, using one of the reagents in excess helps to drive the forward reaction to favor the production of the desired ester.2  If this reaction were to occur, the product formed would not only contain an ester but residual alcohol and acid would be present in the final solution as well.3  In order to extract the ester, sodium bicarbonate must be added to the solution to remove the remaining acid from the catalyst; water must be added as well so that the hydroxyl end of the alcohol will react with the hydrogen bonding of the water.  The inorganic water layer should easily separate from the ester as the ester is organic in comparison and will not mix.  The final ester product can then be placed into an infrared spectrometer to display bands of photon energy indicative of functional groups within the ester.  The spectrometer can generate a numeric value to represent the probability that the substance scanned is an ester.3

In preparation of the esterification reaction, 8 mL of 3-methyl-1-butanol, 11 mL of ethanoic acid, 0.5 mL of sulfuric acid, and a stir rod were combined into a 100 mL round bottom flask.4,5  The flask was set into heating mantle and inserted into a condenser apparatus.4,5  The flask was heated until condensed fluids dripped from the top of the apparatus.4,5  After 55 minutes of heating, the flask was removed from the heating mantle and allowed to cool in a beaker containing room temperature water.4,5  Once cooled, the solution was decanted into a separatory funnel along with 25 mL of cold D.I. water.4,5  An additional 5 mL of cold D.I. water rinsed the flask to collect any leftover substances left behind.4,5  The ester/ water solution was inverted and mixed thoroughly; the top was removed so that the organic and inorganic layers could separate.4,5  The aqueous inorganic bottom layer was extracted into a collection flask.4,5  Sodium bicarbonate was added to the remaining organic layer in increments of 5 mL.4,5  Following each addition of sodium bicarbonate, the separatory funnel was inverted and the stopcock was opened to release built up pressure; the newly formed bottom layer was extracted into a collection flask and tested with litmus paper.4,5  This process was repeated until the bottom layer tested for a basic pH to indicate that the sulfuric and ethanoic acid were removed.4,5  An additional 10 mL of cold tap water was added to the solution; the bottom layer was extracted and tested for a basic pH.4,5  The remaining organic layer was drained into a 125 mL Erlenmeyer flask containing 1.5 g of anhydrous calcium chloride.4,5  The flask was corked and let sit for 10 minutes while the calcium chloride absorbed the water.4,5  The contents of the flask were decanted into a pre-weighed 50 mL round bottom flask and massed to determine the actual yield of the product.4,5

A sample of the product was placed into an infrared spectrometer to generate a visual representation of energy bands given off by the compound that signify functional groups in the product.4,5  The appearance of certain bands helps to identify the composition of the compound present.4,5 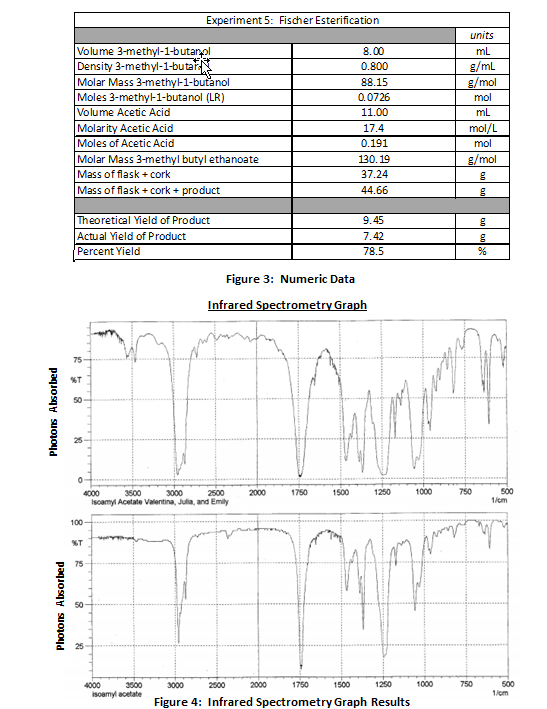 When 8.00 mL of ethanoic acid, 11.00 mL of 3-methyl-1-butanol, and 0.5 mL of sulfuric acid were combined, they produced a solid pink colored solution.  The pink solution was boiled in a 100 mL round bottom flask placed into a heating mantle and reflux condenser apparatus for 55 minutes.   As the reaction progressed, the solution produced a banana-like fragrance.  Following the reflux, the flask was removed from the apparatus and the solution was decanted into a separatory funnel along with approximately 30 mL of cold deionized water.  The ester portion of the solution formed a foamy organic layer on the top while the water and alcohol constituted the aqueous inorganic layer underneath because the density of the ester was less than the density of water.  The ester solution was flushed with sodium bicarbonate and water to extract all alcohol and sulfuric acid in the mixture; the pure ester was drained into a beaker with 1.5 g of anhydrous calcium chloride to absorb the water.  The ester was poured into a 50 mL round bottom flask and weighed to determine the mass of the ester.  The final product was 7.42 g.  The expected yield of the ester was 9.45 g; therefore, the percent yield of this reaction was 78.5%.

When placed into the infrared spectrometer, the energy bands given off by the compound identified the sample as an ester.  There are 3 unique spikes in the graph that indicate the presence of an ester.  The first is a broad spike around 3000 1/s that results from the sp3 hybridized C-H bond.  The second is narrow spike located around 1750 1/s that represents the C=O bond of the ester.  Finally, a smaller spike around 1300 1/s indicates the C-O bond from where the alcohol joined with the acetic acid to form the ester.  Based on a comparison with other IR spectra databases, the spectrometer determined that 935 times out of 1000, the product was the ester 3-methylbutyl ethanoate.

The Fischer Esterification reaction is driven by shifts in equilibrium; therefore the yield of the desired ester can never be 100%.  Although the alcohol, 3-methyl-1-butanol was added in excess to drive the forward reaction, methodologies limit the extent that the ester can be produced.  Upon completing this experiment, the actual yield of the ester was massed as 7.42 g whereas the mass of the ester should have theoretically been 9.45 g; the percent yield of the ester was 78.5%.  The decrease in yield resulted from the use of the acid catalyst, sulfuric acid.  Although sulfuric acid is necessary to start the reaction, the acid catalyst is capable of driving the reaction in both the forward and reverse reactions; with a reverse reaction still occurring, the yield could never be 100%.  This reverse reaction also occurred because of one of the products, water.  Esterification is the process of cleaving hydrogen from the carboxylic acid and a hydrogen along with an oxygen from the alcohol to form water as a byproduct.  During the reflux of this ester, all of the substances in the original solution remained in the 100 mL round bottom flask; this included the water byproduct.  As more water was formed, the amount of products began to surpass the amount of reactants and the reaction started to run in the reverse direction.  Had the water been dispensed into another container, the reaction would have continuously run toward to the products.  Conversely, methodological approaches can contribute to an increased yield resulting from the presence of impurities as well.  The addition of sodium bicarbonate was not precise; therefore, the amount added may not represent the amount necessary to absorb all of the acid present.  Without the proper mass of sodium bicarbonate added to the final solution, residual acid could have been left behind.  The impurities in the final product contribute to the increased yield of the ester.

Sulfuric acid acts as the catalyst for the reaction; it allows the reaction to reach equilibrium.

2.       If you refluxed longer, would you have obtained more product?  Why or why not?

If the reaction were to continue past 55 minutes, no more products would have been produced because the esterification reaction is equilibrium based.  The time frame of 50 to 60 minutes is when the reaction reaches the maximum equilibrium; any further reactivity could drive a reverse reaction to decrease the yield of the product.

3.       Provide a reaction in which you would obtain propyl benzoate using the Fischer esterification reaction.

4.       What two materials, in the preparation of propyl benzoate, would be removed when you extracted with base (sodium bicarbonate)?

Simple distillation can be used to separate from heptane and octane because the differences in boiling points between 98.426 and 125.665 are great enough.  Heptane can be heated to a temperature that exceeds 98.426 without getting too close to the boiling point of octane; therefore, heptane can evaporate from the solution long before octane would enter the gaseous phase.  However, simple distillation would be a less efficient method to separate heptane from methylcyclohexane because the difference in boiling point temperatures is so small.  It would be very difficult to evaporate heptane from methylcyclohexane when the boiling point of methylcyclohexane is only 2 degrees above heptane; it would be very easy for methylcyclohexane to escape into the gaseous phase along with the heptane, especially if the two substances were to form an azeotropic solution.  In that situation, a fractional distillation would be necessary.

6.       As stated earlier, after refluxing for 1 hr, many starting components are still present in the flask as well as the product (ester).  State the primary way(s) in which the following impurities were removed from the ester:  3-methyl-1-butanol, ethanoic acid, water and sulfuric acid.

The alcohol was removed from the final solution by adding water.  Alcohol is an inorganic substance that contains hydrogen bonding.  Not only will the alcohol dissolve in water over the organic ester solution because likes dissolve likes, but the hydroxyl end of the alcohol will interact with the hydrogen bonding of water; therefore, the organic and inorganic substances will separate.  The ethanoic acid and the sulfuric acid were separated from the ester by adding sodium bicarbonate.  The sodium bicarbonate is very effective in removing acids from solutions.  The carbonate ion reacts with the free H+ ions from the acid to make carbonic acid which dissociates into carbon dioxide and water.  The sodium reacts with the acetate and sulfate ions to produce a salt that will dissolve in water over the organic ester solution.