The Formula, Synthesis, and Analysis of Alum

The Formula, Synthesis, and Analysis of Alum

Formula of a Hydrate:
The purpose of this experiment is to determine the formula for the hydrate alum.

Synthesis of a Hydrate:
The purpose of this experiment is to become familiar with the formation of hydrates and using sequential reactions.

Approximately 1g of aluminum foil was weighed to the nearest centigram, torn into small pieces, and placed into a 250mL beaker.  25mL of 3M potassium hydroxide solution was added slowly and was allowed to react until the foil was dissolved. Undissolved solids were removed and discarded through vacuum filtration.  The solution was allowed to cool then acidified slowly with constant stirring using 45mL of 3M sulfuric acid.  The solution was then boiled until the water evaporated to give a volume of about 50mL of solution.  The solution was cooled overnight.  After collecting the crystals by vacuum filtration, they were washed with 50mL of a 50% by volume water and ethanol mixture.  The crystals were then allowed to dry at room temperature, and then massed.  The theoretical yield of alum was then calculated, assuming that aluminum was the limiting reactant and that the foil was 100% aluminum, and was then used to calculate the percent yield.

Analysis of a Hydrate

Approximately 0.5g of dry alum were pulverized with a mortar and pestle, and then packed into a capillary tube to a depth of about 1 cm.  A rubber band was used to fasten the capillary tube to a thermometer with the alum level with the bulb of the thermometer.  A universal clamp and cork stopper were used to fasten the thermometer to a ring stand.  The bottom of the capillary tube and thermometer were immersed in a Thide-Dennis tube, which was filled with water to about 1 inch past the second arm.  The sample was heated rapidly in the beginning, but slowly as it approached the melting point in order to get an accurate reading.  The temperature at which the alum melts was recorded, and was compared to the published value.

After finding the mass of an evaporating dish and watch glass, approximately 2g of alum crystals were added to the evaporating dish.  The evaporating dish, alum, and watch glass were then placed on wire gauze held in a ring on a ring stand and heated very gently over a low blue flame.  After the vapor had appeared to be driven off, the alum was heated more strongly for about five minutes.  After cooling, the mass of the anhydrous alum and the water driven off were calculated and compared to the accepted value of alum.

After weighing about 1g of alum into a 250mL beaker, it was dissolved in about 50mL of distilled water.  After calculating the volume of 0.2M barium nitrate that would be needed to totally precipitate all of the sulfate ions present in the solution, twice that amount was added slowly while stirring.  The beaker was then covered with a watch glass and heated nearly to boiling, where it was kept for about 15 minutes.  The precipitate was then filtered using vacuum filtration and, along with the beaker, was washed several times with small quantities of distilled water.  The filter and precipitate was then transferred to an evaporating dish and allowed to dry in an oven.  After cooling, the precipitate was massed and the percent sulfate present in the alum was compared to the value calculated from its formula.

Bubbles appeared on the anhydrous alum during heating in the second trial.

When the sulfuric acid was added to the solution, the beaker became very hot.  No more crystals were formed in the second trial. 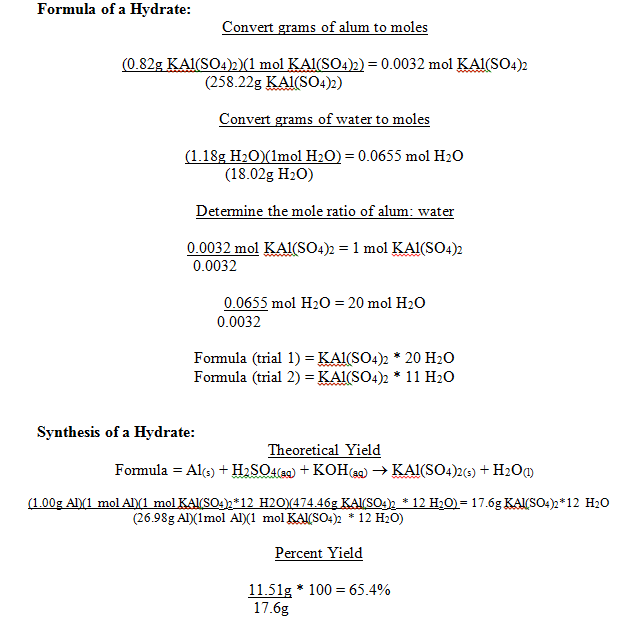 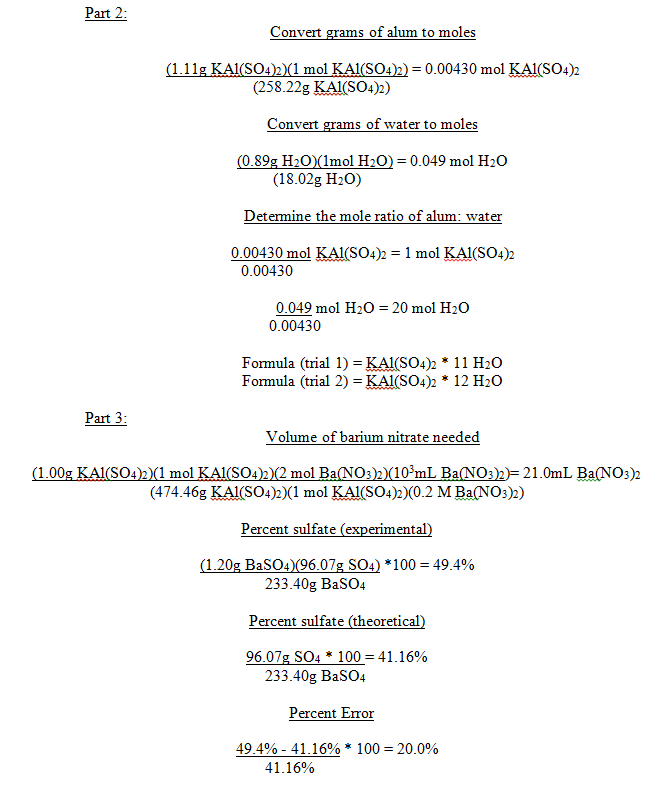 The data collected has very little precision, and it can therefore be inferred that error has most definitely occurred.  A likely source of error is that in the first trial, some of the anhydrous alum was lost, either by spillage or splattering during heating, making the mass of the anhydrous alum appear smaller, and after the appropriate calculations, making the mole ratio of alum to water greater in the water’s favor.

Some modifications that could be made to the procedure to help avoid this type of error are to make sure that the watch glass is securely on the evaporating dish, and to take extra precautions so as to avoid spillage.

In the first trial we obtained a percent yield of 65.4%, from which it can be inferred that mass was lost during the syntheses.  This could have happened during the crystal collection by vacuum filtration.  Some of the crystals could have gotten stuck in the filter, and therefore not accounted for in the final mass.

A modification that could be made to the procedure to avoid this type of error is to carefully remove all crystal pieces from the filter and to be careful of spillage.

During the second crystallization, no more alum crystals were obtained.  An explanation for this could be that all of one of the reactants was used up during the first trial, or that the temperature was not cold enough for the crystals to form.

A modification that could be made to prevent this is to keep the solution in the ice bath for a longer period of time.

In both trials a melting point of 86.0oC was obtained, which is 4.2% error.  Although there was some error, the results are very precise, from which it can be inferred that the source of error was something that affected the entire sample of alum before the experiment was carried out.  The most likely source of error was the obtainment of impurities.  This would have affected the entire sample of alum, and therefore changed the melting point of both trials.

A way to prevent this type of error is to ensure that all objects that come into contact with the alum have been thoroughly cleaned and dried first.

In the first dehydration we obtained a mole ratio of 1 mole of alum to 11 moles of water.  Because we know that the true ratio is 1:12, it can be inferred that an error was made.  The most likely source of error is that not all of the water was driven off during the heating.  If some water remained in the product that was assumed to be anhydrous, then when the mole ratio was calculated, it would have seemed as if the moles of water were smaller.

A way to prevent this type of error would be to heat the alum thoroughly, either by heating more vigorously or for a longer period of time.

In the second dehydration we obtained a mole ratio of 1 mole of alum to 12 moles of water, which is the correct ratio, so it can be inferred that if an error was made, it was not a large enough error to affect the mole ratio.

A hydrate is a chemical compound that contains water it its structure.  To find the formula of a hydrate, the hydrous sample is heated until all water is gone from the compound.  By comparing the mass of the hydrous sample and the anhydrous sample, we are able to determine the mole ratio of product to water, which gives us the formula of the hydrate.  Assuming that the compound has been properly dehydrated and that no mass has been lost, the experiment is expected to yield fairly accurate results.

Alum is a general name for the type of compound in which many combinations of an alkali metal and ammonium or a trivalent metal such as aluminum, iron, or chromium.  A synthesis reaction is a reaction in which two or more chemicals are combined to create a new compound or compounds.  The following sequential reactions take place in this experiment to synthesize alum (KAl(SO4)2 * 12H2O):

A 100% yield should not be expected from this reaction because aluminum is the limiting reactant, and a certain amount of aluminum is lost when the solid aluminum hydroxide is filtered out.   The crystals should be washed with a 50% ethanol and water by mass solution because they dissolve easily in pure water.  As the temperature decreases, the crystal’s solubility decreases, thus why they can be put into an ice bath after boiling in order to rapidly produce crystals.  The hydrated aluminum ion is in the shape of an octahedron, which is a eight-sided figure as shown below in figure 1. 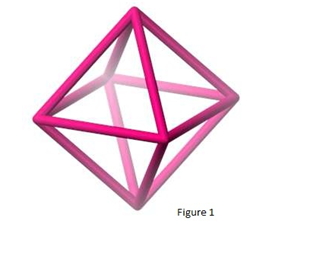 A melting point is a usually a fairly reliable way to determine the identity of a substance, however, there are influences which could affect the results and therefore result in a wrong identification.  One of these influences is the obtainment of impurities into the sample being tested.

To find the formula of a hydrate, the hydrous sample is heated until all water is gone from the compound.  By comparing the mass of the hydrous sample and the anhydrous sample, we are able to determine the mole ratio of product to water, which gives us the formula of the hydrate.  However, before massing, the sample and container must be cooled because the large temperature difference affects the surrounding air and therefore can affect the density of the sample.