Green Oxidation of Menthol Enantiomers and Analysis by Circular Dichroism

Green Oxidation of Menthol Enantiomers and Analysis by Circular Dichroism 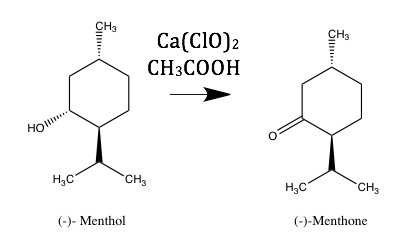 A green oxidation of (-)-menthol to (-)-menthone was achieved through use of calcium hypochlorite.  While many oxidation reagents are detrimental to the environment or expensive to acquire, calcium hypochlorite is cheap, produces little waste and facilitates a good yield of product.  IR, CD, and NMR spectroscopic methods were used to confirm the identity and purity of the product. The final percent yield for the reaction was 42%.

Since many chemicals used for oxidation are toxic and expensive, the oxidation performed in this experiment was focused on being environmentally friendly and inexpensive.  The reagent used is calcium hypochlorite, the main ingredient in common pool shock. After the reaction was complete, all that was necessary to do was neutralize excess reagent and adjust the pH before disposing of waste.  This waste is much easier to deal with than that of more commonly used oxidizing agents.  In addition to IR and NMR, CD spectroscopy was used to confirm that the oxidation had taken place.  It was also used to confirm the enantiomeric relationship between the (-)-menthone and the (+)-menthone.

The oxidation of (-)-menthol to (-)-menthone in this experiment was accomplished through the use of high concentration hypochlorite solution.  This waste is much easier to deal with than most waste from more common oxidations, which often contain transition metals.  At the end of the reaction, the excess Ca(ClO)2 was neutralized with sodium bisulfate, after which the pH was neutralized with sodium hydroxide.  Despite the fact that the reagents used were cheap and not as toxic as normal oxidation reagents, the yield of 0.2048 grams for this reaction was good.

Once the oxidation had taken place, several spectrophotometric tools were used to determine the purity and identity of the product.  IR spectroscopy was first used to confirm that the oxidation of the alcohol had in fact occurred.  The alcohol stretch at 3239.4 cm-1 observed in the starting material disappeared in the product and was replaced by a deep carbonyl stretch around 1700 cm-1.  This was a confirmation of what was expected for the reaction since it started with an alcohol, which was oxidized to a carbonyl.   The spectroscopic data obtained from the IR was also useful in establishing purity in the final product.  The IR for (-)-menthone showed carbonyl stretching and the alcohol stretch was completely gone, indicating that there was no contamination of starting material.

Another method of spectroscopy that was employed to confirm that oxidation had taken place was circular dichroism spectroscopy.  This method measures how molecules rotate circularly polarized light.  The starting material had no chromophore, a necessary group for a molecule if it is to show up in CD spectroscopy.  The final product though, has a carbonyl, which responds well to this form of spectroscopy.  As expected, the starting material exhibited no signal, while the final product rotated circularly polarized light with a maximum of 34 mdegrees.  Circular dichroism spectroscopy is also useful in identifying enantiomers, since they rotate the circularly polarized light differently.  The experiment was worked in pairs with one student making (-)-menthone and the other making (+)-menthone.  When the CD spectra were taken of each, it was observed that the (-)-minus menthone exhibited positive rotation while the (+)-methone exhibited negative rotation.  The absorption spectrum was taken as well, with the result that the absorbance began to increase at the wavelength corresponding to the maximum in the CD spectra.

Finally, 1H NMR spectroscopy was used as one more way to confirm that the oxidation had taken place.  Though the spectra as a whole is a bit messy, the most important part that signals the oxidation is easy to see.  In the starting material the proton on the carbon with the alcohol group showed a signal at 3.4 ppm.  The 1H NMR of the final product lacked that peak, indicating that the oxidation had taken place.  From around 0.7 and 2.7 ppm there were many aliphatic hydrogen signals, though the most important area at around 3.4 is clear.  There was an impurity resembling a benzene ring around 7.5 ppm.  This could be due to contaminants in the chloroform used by the whole lab or contaminants in the NMR tube.

Through the use of Ca(ClO)2, it was possible to accomplish a green oxidation of (-)-menthol.  The success of the experiment was determined through IR, NMR, and CD spectroscopy.  These spectra indicated that the compound obtained was pure and the CD spectra confirmed that the plus and minus products were enantiomers.  The yield of 42% was good for an oxidation and since the experiment was environmentally friendly, the reagents were cheap and easy to deal with as waste.

A solution containing (-)-menthol (0.50 g, 3.2 mmol) and glacial acetic acid (1.0 mL) was prepared.  Over a period of 30 minutes, Ca(ClO)2 (20 mL, saturated) was added while the temperature was kept between 15-20°C.  The mixture was cooled to room temperature and then chilled.  To neutralize excess hypochlorite, saturated sodium bisulfate solution was added until the temperature of the solution stopped rising.  Reaction mixture was filtered, chilled in an ice bath and neutralized with NaOH (6 M).  Before being transferred to separatory funnel, reaction mixture was saturated in NaCl.  Two extractions of diethyl ether (15-20 mL) were performed, following which the organic layers were combined and dried using anhydrous magnesium sulfate.  Gravity filtration was used to remove drying agent and the final product was isolated by removing ether solvent using rotary evaporation.  After weighing, it was determined that the yield was 0.2048 grams.  The final product was analyzed through IR spectroscopy in its pure form (Thermo Scientific Nicolet iS10). Two drops (-)-menthone were place in an NMR tube and diluted in deuterated chloroform (~0.75 mL) and analyzed on a 400 MHz Varian 7600-AS NMR.  Sample was prepared for CD spectroscopy by diluting several drops from a micropipette in HPLC grade hexane (4 mL) in quartz cuvette (1 cm).  Starting material: IR(neat, cm-1) 3239.40, 2954.09, 2927.35;  1H NMR (400MHz, CDCl3) δ3.4 (m, 1H), aliphatic hydrogens from δ 0.7- 2.3 (m; CD (Jasco J-815 spectropolarimeter, hexane) no rotation. Product was a clear, yellowish liquid: IR(neat, cm-1) 2958.28, 2929.26, 1700; 1H NMR (400MHz, CDCl3) peak at 3.4 gone, aliphatic hydrogens from around 0.7ppm to 2.7ppm; CD (Jasco J-815 spectropolarimeter, hexane) positive rotation with 34 mdegrees maximum, (+)-menthone negative rotation with -38 mdegrees maximum.