All molecules and atoms have a ground electronic state, along with at least one excited state. The ground state is a singlet state, since all electrons are spin paired. Most atoms and molecules have excited singlet states of higher energy than that of the ground state. Some species have excited triplet states, where electrons are unpaired and have parallel spins. Each excited state has associated vibrational levels.

When a photon of light with energy equal to that of the energy difference between the ground and excited electronic state of a molecule, an electron can absorb the energy and can be promoted to any vibrational level associated with the excited state. Electrons that are promoted to high energy levels lose their energy quickly through collisions with other molecules (for example, with solvent molecules, which is a process known as external conversion). If this does not happen, there are two main pathways for the excited electron to return down to the ground state. The electron can emit a photon of light equivalent in energy to the energy difference between the excited and ground state, which is a process known as chemiluminescence. If the photon is released as a result of an electron relaxing from a singlet state, the light emitted is known as fluorescence. Since this process is spin-allowed, it characteristically happens more quickly (nanosecond scale) than phosphorescence, which is when a photon is released as the result of an electron relaxing to the ground state from a triplet state.[i] These processed can be described using a Jablonski diagram, as shown in figure 1.

Supramolecular chemistry has been defined by the Encarta English Dictionary as chemistry that is more complex in form than a molecule. It encapsulates chemistry where assemblies of molecules are held together with intermolecular forces rather than covalent or ionic bonds. In recent years, Host-Guest chemistry has received a lot of interest and attention, and involves the design and synthesis of “host molecules” with the intent of selectively binding to a specific “guest molecule.”

One type of host molecule that has been widely studied is the cyclodextrin, which are composed of rings of between 5 and 10 glucose molecules. The most commonly encountered cyclodextrins have 6, 7 or 8 glucose molecules in the ring, and are called α-, β- and γ-cyclodextrin. They each adopt a torus shape (like a cone but the spiky bit has been chopped off) where the hydrophilic hydroxyl groups of the glucose molecules point outwards, leaving a hydrophobic interior. This enables the cyclodextrins to encapsulate an enormous number of molecules (driven by the hydrophobic effect, Van Der Waals interactions, and the expulsion of polar solvents from the cavity) and has led to their commercial success in many applications. 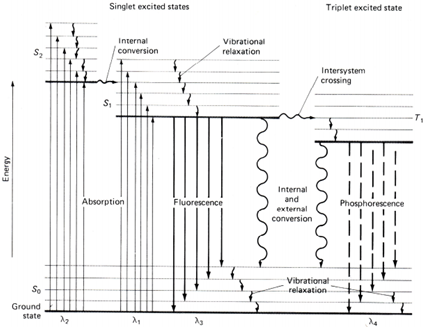 Figure 1 – A Jablonski diagram where S0 is the ground state, S1 and S2 are excited singlet states, T1 is an excited triplet state

α-Cyclodextrin was first synthesised in 1984 by simply using an intramolecular reaction of the two ends of a hexamer of glucose. To avoid early cyclysation, one end of the chain is protected.[i] Cyclodextrins can by purified using HPLC.[ii]

Figure 2 – the structural formula of PRODANPRODAN, as shown in figure 2, is a molecule that can both absorb photons of light, and emit them in the process of electron relaxation. It can also fit into the cavity of cyclodextrins. PRODAN is known as a solvochromatic molecule because it has electron donating and electron withdrawing groups in resonant positions around a conjugated system. When PRODAN absorbs a photon, the dipole moment increases as a result of charge travelling along the conjugated system in the process of intramolecular charge transfer, as shown in figure 3.[i] This experiment explores how different solvents alter the wavelength of emitted fluorescence.

If this is the case, then a plot of 1/ (F-F0) against 1/ [CD]2 should yield a straight line, from which the product of the two equilibrium constants can be calculated by dividing the y-intercept by the gradient of the line.

The aims of this experiment were to determine the effect that solvent had on the emitted wavelength of light due to fluorescence; to establish whether a host-guest complexation between PRODAN and β-cyclodextrin has an effect on the relaxation of electrons; to establish the equilibrium constant of the complexation between PRODAN and β-cyclodextrin; and to determine whether cyclodextrin forms complexes to one or two molecules of PRODAN.

The fluorescence emission spectrum between 400 and 600 nm of provided solutions of PRODAN in water, ethanol, DMSO, chloroform and cyclohexene using an excitation frequency of 360 nm in a quartz cuvette. Additional parameters are given in table 1. Each spectrum was recorded to determine the wavelength at which the maximum fluorescence occurs.

Host-guest complexation of PRODAN by β-cyclodextrin

The solutions were thoroughly mixed before measuring their emission spectra using the conditions stated below in disposable polymethacrylate cuvettes. The spectrum of solution G was measured first since it had the highest concentration of β-cyclodextrin. The PMT voltage was adjusted until the emission intensity was between 800 and 1000 at 500 nm. After this, the other spectra were recorded to determine their emission intensity at 500 nm. 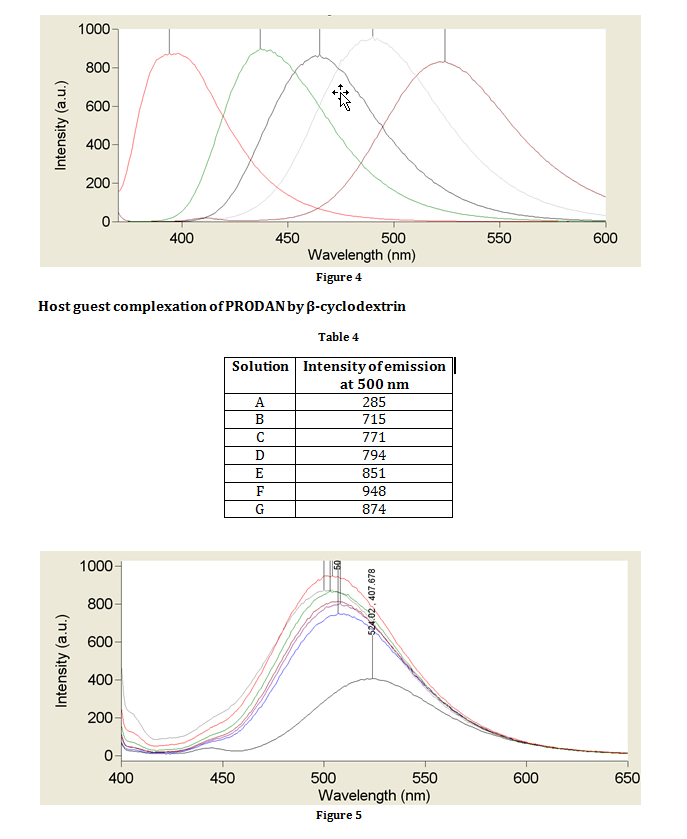 Figures 6 and 7 are plots to determine whether the complexation has a 1:1 or a 2:1 stoichiometry, and then to determine the equilibrium constant of complexation. It can be seen that the complexation has a 1:1 stoichiometry since a straight line is obtained in figure 6, but not in figure 7. From the line of best fit in figure 6, the equilibrium constant can be calculated, as stated in the introduction, by dividing the y-intercept by the gradient.

This is a very high value, which indicates that the binding affinity between PRODAN and β-cycloxtrin is strong, and that the complexation reaction is thermodynamically favourable.

The aims of this experiment were to determine the effect that solvent had on the emitted wavelength of light due to fluorescence; to establish whether a host-guest complexation between PRODAN and β-cyclodextrin has an effect on the relaxation of electrons; to establish the equilibrium constant of the complexation between PRODAN and β-cyclodextrin; and to determine whether cyclodextrin forms complexes to one or two molecules of PRODAN.

It was determined that the solvent used has an effect on the wavelength of emitted fluorescence due to stabilisation effects from polar solvents on the excited state. Encapsulating PRODAN in a cyclodextrin had the same effect and stabilised the excited state with the hydroxy groups bonded to the glucose backbone.