Identification of an Unknown Carbonyl

Identification of an Unknown Carbonyl

Identification of an Unknown Carbonyl
By: Stacey Walker

The 2,4-dinitrophenylhydrazine (2,4-DNPH) and semicarbazone derivatives of the unknown carbonyl are synthesized and their melting points are obtained. The infrared (IR) and proton nuclear magnetic resonance (NMR) and boiling range of the liquid unknown is obtained. Based on boiling point and infrared and proton nuclear magnetic resonance, the derivative is 2,4-pentanedione.

Formation of 2,4-DNPH derivative of 2,4-pentanedione:

Formation of semicarbazone derivative of 2,4-pentanedione:

Infrared (IR) spectra were collected using an IR spectrophotometer. The IR spectroscopy involved the accumulation of background spectra, which were subtracted from the spectra of the unknown sample to provide the response of the sample. Each experiment resulted from the average 8 scans, with the background being the accumulation of 8 spectra scans without the sample present. The resolution of the spectrometer was set at 4 cm-1 for all spectra. Proton nuclear magnetic resonance (NMR) spectra were recorded on a spectrometer. The NMR spectroscopy involved mixing the unknown and carbon tetrachloride in a 1:1 ratio and adding 2-3 drops of the chemical shift standard, tetramethylsilane (TMS).

DNPH reagent was then added to the mixture in a test tube and shaken vigorously. The resulting red-orange precipitate was suction filtered and washed with cold water.

The melting ranges of both derivatives were obtained using a melting point apparatus. A simple distillation was carried out to determine the boiling range of unknown. 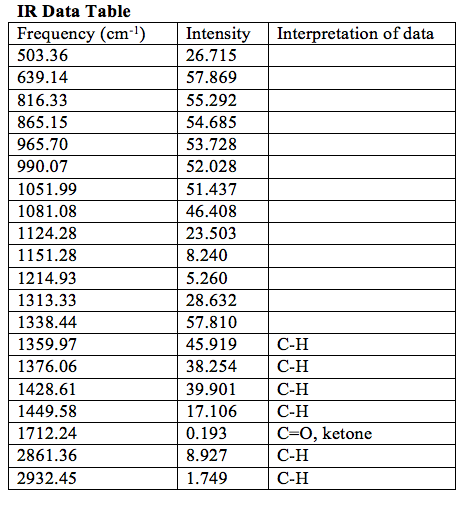 On the attached proton NMR spectra, there were peaks between 0.5 parts per million (ppm) and 2.5 ppm, with peaks at approximately 2.0 ppm and 0.94 ppm. Carbonyl hydrogens were typically found in the 2 to 2.7 ppm range. The lack of a peak near 9 and 10 further indicated that the unknown was not an aldehyde. Primary hydrogens were usually found in near 0.9 ppm (Sturm, 2014). It is possible, however, that the hydrogens close to the carbonyl group were shifted further from the standard because the hydrogens were deshielded by the carbonyl group. The peak to the left of the spectra had a larger area under the curve, showing that there are more deshielded hydrogens in the unknown. Based on these observations, one can conclude that the unknown is 2,4-pentanedione. 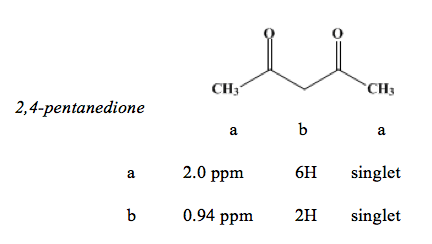 Cyclohexanone will not react because ketones are not readily oxidized and will therefore not react with the Tollen’s reagent.

Acetophenone will not react because ketones are not readily oxidized and will therefore not react with the Tollen’s reagent.

3.  In the reaction of an aldehyde or ketone with derivatives of ammonia, the reaction can be catalyzed by sulfuric acid. However, it is important that the pH not be too low since the reaction will slow down at very high acid concentrations. Explain.

4.  Ketones do not oxidize readily. However, cyclohexanone will react with powerful oxidizing agents at high heat to adipic acid (HO2C-(CH2)4-CO2H).  The reaction is not really one of the ketone, but the enol.  Write equations to show how this is possible.