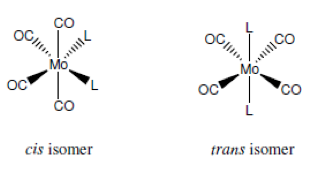 Metal carbonyl complexes are of interest in inorganic chemistry as they are good starting materials for many low oxidation state compounds. They are very reactive and lose one or more CO ligands upon heating, photolysis, exposure to other radiation, partial oxidation etc. They react with Lewis bases to form closed shell compounds and can also form clusters. Phosphine complexes (as in this experiment) are also used in many catalytic applications.

The following experiment was carried out in order to prepare an isomer of the molybdenum carbonyl complex [Mo(CO)4(piperidine)2] and to subsequently convert this isomer to both possible isomers of [Mo(CO)4(PPh3)2]. The isomers should be identified as cis or trans by examining the CO stretching region of the IR spectra of prepared compounds. IR spectroscopy proves to be very good technique for analysing metal carbonyl complexes as they show very strong and sharp absorptions due to CO stretching vibrations in the range of 1750-2100 cm-1. Different geometric isomers of complexes are very common in ligand substituted mononuclear metal carbonyl chemistry. Cis and trans isomers should have different absorption bands in their CO stretching region due to difference in their geometries. For this experiment it is expected to see four carbonyl bands from a cis [M(CO)4(L)2] complex and one band for trans isomer.

Following procedure illustrates preparation of an isomer for molybdenum carbonyl complex [Mo(CO)4(pip)2] (1), followed by procedure for converting above complex to its two isomers (2) and (3). Geometry of prepared isomers was determined later after obtaining an IR spectrum for both complexes.

1.0090g of [Mo(CO)6] were suspended in dry toluene (40cm3) under N2 and piperidine (10cm3) was added to the mixture. The mixture was heated at reflux for 2 hours and the [Mo(CO)6] got fully dissolved and gave a yellow-orange solution. This solution had slowly become opaque and yellow precipitate of the product (1) was produced. The reaction mixture was filtered hot using a Buchner pump and the remaining bright yellow product was washed with cold petroleum ether (2 x 10cm3 portions, previously cooled in ice bath for 15 min). The product was left to dry.

0.51g of [Mo(CO)4(pip)2] (1) was partially dissolved in dry CH2Cl2 (20cm3) under N2 and PPh3 (0.76g) was added as a solid. The reaction mixture was heated to reflux to fully dissolve (1) and reflux was maintained for 15 min. The reaction solution was allowed to cool to room temperature and the orange solution was filtered. The filtrate was reduced in volume to ca. 8cm3 via rotary evaporator and methanol (15cm3) was added. The solution was cooled in a freezer for 15 min and pale yellow product was crystallised out. The product was collected by filtration using a Buchner flask and dried at the pump.

0.25g of [Mo(CO)4(PPh3)2] (2) was dissolved in dry toluene (10cm3) under N2 to give a pale yellow solution. This solution got heated at reflux for 30 min and then was allowed to cool to room temperature. The toluene was removed on a rotary evaporator to yield the product as a brownish off-white residue (3).

Weight, melting point and IR spectrum was obtained for all three products and added to Results section of this report.

IR spectrum attached at the end of this report (experiment 6 (a)) shows characteristic CO stretching peaks at 1774, 1838 and1887 cm-1. There should be 4 peaks present, another  C=O stretch at around 1745cm-1 but it is not visible as it is assumed that is overlapped by a strong signal at 1744cm-1.

IR spectrum attached at the end of this report (experiment 6 (c)) shows characteristic CO stretching peak at 1884 cm-1. It can be deducted from this that this is a trans isomer of [M(CO)4(L)2] complex as it shows one very intense peak in carbonyl stretch region.

In this experiment [Mo(CO)4L2] compounds are formed starting from Mo(CO)6.

Step (1) involves formation of cis-[(CO)4(pip)2]. The formation of the cis piperidine adduct requires elevated temperatures because two of the Mo-C bonds have to be broken.

In Step (2) cis-[Mo(CO)4(PPh3)2] is formed from PPh3 and cis-[(CO)4(pip)2] at low temperature. Reaction with two equivalents of triphenylphosphine yields the cis isomer which is known as kinetic product.

Melting points obtained match quite closely to literature values which shows that products are of high purity. The products decomposed upon melting rather than formed a liquid so it was not easy to get accurate results, however obtained results can still be considered accurate.

The mechanism by which isomerism would occur in complex [Mo(CO)2(L)2] with ligand PnBu3 and PPh3 would be different as PnBu3 is much larger ligand than PPh3 and is also an electron donor while PPh3 is a strong electron withdrawer.

The cis-trans isomerisation is influenced by steric factors associated with nature of the ligand. PPh3 ligand is quite bulky and favors the trans isomer at elevated temperatures in order to reduce steric repulsion between PPh3 ligands and is more thermodynamically stable.

An isomer of the molybdenum carbonyl complex was successfully prepared and converted to its both possible isomers. Decision on which isomer is cis or trans was made on the basis of IR spectroscopy analysis. Spectrums obtained showed significant difference in number of absorption bands in CO stretching region for both isomers which proves that IR spectroscopy is a very useful technique in determining different isomers of metal carbonyl complexes.