Intro to Organometallics: The Heck Reaction

Intro to Organometallics: The Heck Reaction

The purpose of this lab was to perform a Heck reaction between an unknown isomer of bromoiodobenzene and acrylic acid and understand the mechanism involved. The unknown, isolated product, is a trans disubstituted alkene. The final product’s exact structure was determined through analysis by 1H-NMR.

The theoretical yield was found to 0.401 g and bromoiodobenzene was the limiting reactant. This was determined from the following calculations:

R1 is bromoiodobenzene, R2 represents acrylic acid, another reactant, and R3 is triethylamine, a third reactant, and P is the product. Palladium (II) acetate was a catalyst; therefore, a calculation is not needed.

The initial amounts of each reactant were also calculated. In the journal article, The Heck Reaction: A Microstate Synthesis Using a Palladium Catalyst, 141 mg of bromoiodobenzene was used for the reaction.3 In this experiment, 500 mg was used, so a factor of 3.55 was calculated. The amounts of acrylic acid and triethylamine found in the article were multiplied by 3.55 to obtain the amounts needed in this experiment. The calculations are as follows:

Two mol percent was needed of palladium (II) acetate, the catalyst. This was calculated as follows:

To begin the experiment, triethylamine (618 μL), acrylic acid (153 μL), and palladium(II) acetate (0.0079 g) were added to a provided vial containing of bromoiodobenzene (0.500 g), unknown X, dissolved in acetonitrile (710 μL). The mixture was heated on a hot plate between 80-90 ̊C while being stirred with a stir bar for an hour. Once the hour was up, the reaction was cooled to room temperature and transferred via glass pipette to a beaker containing 30 mL of 3 M HCl. The mixture was swirled and a solid began to form. The solid was obtained using a Buchner funnel for suction filtration. The remaining solid was rinsed out of the beaker using water (5 mL). After filtration, the product was left to air dry for about five minutes.

For the crystallization process, the crude solid was transferred to a 50 mL Erlenmeyer flask and hot 95% ethanol (5 mL) was added to it. The solution was heated in order to dissolve the product. After five minutes, product still remained in the flask; therefore, more of the 95% ethanol (2 mL) was added to the product in order to further dissolve it. Once the product fully dissolved, about 2.5 mL of hot water was added drop wise to the product until it became cloudy. The mixture was cooled to room temperature, followed by an ice bath for 15 minutes. The product was isolated by suction filtration. After filtration, the product was left to dry for one week.

The final weight of the crystallized product after drying for one week was 0.1433 g. The percent chemical yield was calculated to be 35.74%, as mentioned in calculations. For structure analysis, the pure product (0.010 g) was added to a small vial. To dissolve the solid, 750 μL of CDCl3 containing 7% DMSO-d6 was added to the small vial. Using a glass pipette, the solution was transferred to an NMR tube for analysis of the pure product by 1H-NMR. 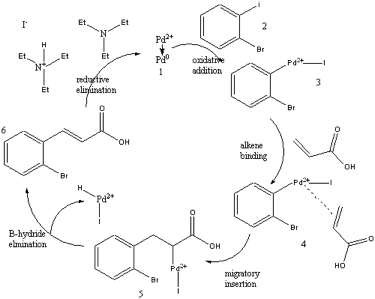 The Heck Reaction can begin when Pd+2 is reduced by triethylamine, a tertiary amine. Fig. 1 shows that initially Pd+2 gains two electrons, becoming Pd0, followed by oxidative addition with o-bromoiodobenzene, an aryl iodide. Oxidative addition behaves like a Grignard reaction, where the Pd is oxidized from Pd0 to Pd+2 and the Pd+2 is inserted between the carbon and Iodine. The next step is alkene binding where acrylic acid and the Pd+2 form an unsaturated bond, making a complex Palladium. During migratory insertion, the bond between carbon and Pd+2 grabs the acrylic acid on the terminal alkene end while the other carbon of the alkene grabs Pd+2, forming two new bonds. The forming of two new bonds by migratory insertion makes step five, as shown in Fig. 1, responsible for the trans structure of the product. The product, trans-2-bromocinnamic acid, is formed during β-hydride elimination, where the metal (iodine), Pd+2, and one hydrogen are removed. Pd+2 gains a hydride ion and the bond between Pd+2 and iodine comes off with the hydride ion, therefore, the carbons make a double bond. Reductive elimination reduces Pd+2 back to Pd0 by the triethylamine, allowing the reaction to occur in a catalytic cycle.

Step five shown in Fig. 1 is responsible for the cis/trans selectivity observed in the reaction. Two new bonds are formed in step five and during this bond formation, the R group can end up in the cis position or the trans position. This intermediate has the ability to freely rotate, as seen in Fig. 2. 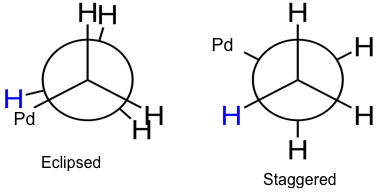 The proposed structure of the unknown is seen in Fig. 3. The unknown is 2-bromocinnamic acid. The bromine is ortho to the alkene substituent on the ring. This is known because of the chemical shifts seen between 7.0 and 8.0 ppm, as seen in Fig 5. If the bromine was ortho, four shifts would be present because there is no symmetry. If the bromine was para to the alkene, then there would only be two shifts because of symmetry. Seeing three shifts to represent the hydrogens on the aromatic ring is not typical. Therefore, after obtaining J values, or coupling constants, for the triplet found around 7.45 ppm, it was seen that the triplet is actually two doublets. The J values should be equal between each of the three peaks; however, it is not. The J values are 9.24 Hz and 9.13 Hz, suggesting the triplet is actually two doublets with overlapping peaks. The overlap indicates that the hydrogens are similarly deshielded, but not identical. To add to this, the peaks also presented long-range coupling by showing to be a “triplet of doublets.” This means the hydrogen coupled with other hydrogens not directly adjacent to it.

The alkene substituent is trans. This was known because of the coupling constant, or J value, between the alkene hydrogen chemical shifts. The J value between peaks at 6.2 ppm, as seen in Fig. 6, is 15.91 Hz. The J value between the other alkene hydrogen peaks, around 7.9 ppm as seen in Fig.6, is 15.92 Hz. Because the peaks at 7.9 ppm are further downfield, this means they are more deshielded and have resonance forms that contribute to this.1 The carbon with the hydrogen directly connected to the ring is represented at 7.9 ppm because it obtains a positive charge when the oxygen obtains a negative charge (a resonance form).