Isolation of Caffeine from Tea Leaves

Isolation of Caffeine from Tea Leaves

Isolation of Caffeine from Tea Leaves
By: Julia Trimble

Caffeine is an alkaloid stimulant with a cyclic backbone structure analogous to the purine structures of DNA, giving it the ability to affect biochemical pathways in the body1.  In commercial application, caffeine supplements pharmaceuticals and certain beverages such as coffee or tea.  Standard tea bags contain 2.00 +/- 0.05 g of tea leaves along with approximately 55 mg of caffeine[1].  Using the proper extraction methods, the caffeine within a tea bag could potentially be isolated to yield a pure solid; the mass of this solid would reflect the actual yield of caffeine in the tea.  To do so, caffeine must be introduced to a solvent that is both volatile and insoluble to water; a perfect example is methylene chloride[2].  Caffeine has a greater affinity for methylene chloride and will easily dissolve in this solvent over water; however caffeine is not the only organic substance found in tea that is capable of reacting with methylene chloride.  Along with caffeine, tea bags contain organic substances called tannins, or gallic acid1.  Both caffeine and gallic acid are capable of dissolving in water; however, caffeine has a stronger attraction to water due to the dipole-dipole interaction that results from the greater polarity of caffeine and the hydrogen bonds that form between caffeine and water1.  Theoretically, the intermolecular forces of gallic acid can be manipulated to induce a stronger dipole-ion interaction.  If a common salt like sodium carbonate was introduced to the solution, gallic acid could revert back into phenol salt: a polar, inorganic molecule that is insoluble in methylene chloride[3].

To start, a 150 mL beaker containing 50 mL deionized water and 2 boiling stones was prepared to dissolve 2.0 grams of sodium carbonate to react with the gallic acid in tea.  The beaker was allowed to heat until the water started to boil, at which point the temperature was lowered and 2 tea bags were placed into the water.  The solution was heated for 10 to 12 minutes to achieve the highest concentration of tea.  At the same time, the insoluble cellulose components of tea separated from the solution rendering the tea concentrate, caffeine, and the new phenol anion product.  The final saturated solution was poured into a 100 mL beaker while the fluids trapped within the tea bags were simultaneously rinsed with an additional 10 mL of deionized water.  Once cooled, the solution was transferred into a 125 mL separatory apparatus, a glass funnel used to separate unmixable solutions.  From the top of the funnel, methylene chloride was poured into the solution in increments of 5 mL.  Following every addition of methylene chloride, the funnel was inverted to release the built-up pressure from the reaction.  The reaction rendered brown top layer of tea and a clear bottom layer of dense methylene chloride.  The bottom layer was released from the stopcock and collected into a 100 mL beaker leaving behind a thin layer of methylene chloride to prevent contamination.

Methylene chloride was added 2 more times to assure that all of the caffeine was reacted with.  Sodium sulfate was added to the extraction to absorb any water that escaped from the tea and the remaining fluid was decanted and rinsed into a pre-weighed 50 mL beaker with boiling stones using an additional 2.0 mL of methylene chloride.  When boiled, the volatile methylene chloride evaporated, rendering pure, solid caffeine.[1],[2],[3]

The predetermined masses provided by the Lipton Tea manufacturers are accepted as the experimental measurements of both tea and caffeine.  The approximate weight of an individual Lipton tea bag is 2.00 ± 0.05 g, containing 55 mg of caffeine per bag.  In an experiment using 2 tea bags, 110 mg is the expected yield of caffeine to obtain.  A 50 mL beaker, along with 2 boiling stones, was weighed in advance with a total mass of 27.56 g during the extraction process.  To extract caffeine, the heated tea solution, along with 5 mL of methylene chloride, was poured into an isolated separatory funnel and inverted to mix the solution completely.  Due to the reaction, pressure built up inside the funnel, requiring the stopcock to be opened to release excess gas following each inversion.  Once settled, the solution separated into 2 layers: the polar, brown tea solution on the top and the nonpolar, clear methylene chloride on the bottom.  The tea separated above the methylene chloride because while the density of water is 0.997 g/mL, the density of methylene chloride is 1.32 g/mL.  Between the two layers sat small bubbles or possible emulsions that restricted the amount of methylene chloride that could be extracted.  Despite this, the methylene chloride/ caffeine layer was effectively drained into the pre-weighed 50 mL beaker and the process was repeated 2 additional times to ensure that all of the caffeine was reacted with.  In doing so, the volatile methylene chloride began to evaporate into the surroundings due to the increased room temperature.  The remaining solution was heated briefly until the volatile solvent evaporated, leaving behind solid caffeine.  When weighed, the beaker, stones, and caffeine rendered a total mass of 27.58 g.  The difference in mass between the initial weight of the beaker and the final product was then the actual yield of caffeine, 0.02 g.  In comparison to the theoretical mass, the experiment provided 18.18% yield of caffeine.

The solid caffeine product was run through an Infrared Spectrometer that uses bond energies to identify chemical compounds.  The spectrometer produced a graph based on measurements of photon energy within a frequency range between 400 and 4000 Hz.  Individual spikes on the graph indicate the unique bond energies of certain functional groups.  For example, the photon energy spike visible around the 3000 Hz frequency represents amine and amide group apparent in caffeine.  The other important spike appears around 1600 Hz and 1750 Hz.  This spike represents the alkene portion of the caffeine molecule.  Using these individual spikes in photon energy, the infrared spectrometer predicts the composition of the compound present.  The spectrometer predicted the probability that the sample produced was caffeine to be 869 out of 1000.  This value has no relation to the purity of caffeine.

As is expected, the percent yield of caffeine was not 100%; however, achieving this goal is impossible.  The mass of caffeine from 2 Lipton tea bags was only 18.18% of the theoretical yield but in consideration of all the factors responsible for error, 18.18% is an acceptable value.  The error in yield results from a number of unavoidable experimental flaws.  The first flaw originates from the reaction between gallic acid and sodium carbonate.  Although the conversion of gallic acid is necessary for the reaction of caffeine and methylene chloride to occur, the phenol anion byproduct of this reaction is responsible for necessary error[1].  When phenolic acids are reverted back into salts, anionic surfactants are produced4.  These surfactants are responsible for emulsifying water insoluble materials like methylene chloride.  As a result, large soapy bubbles called emulsions are produced by the polar and nonpolar solutions.  During the extraction phase of this experiment, these bubbles restricted the amount of caffeine released from the separatory funnel resulting in a lesser yield.  Another source of lesser yield originated from techniques used to prevent the contamination of the methylene chloride solution.  While extracting the caffeine, a small layer of methylene chloride needed to be left behind to avoid tainting the final product[2].  By discarding part of the methylene chloride solution, a portion of the caffeine was left behind that affected the overall yield of the product.  The final source of error originates from unpreventable environmental conditions.  As a result of the hot plates used prior to the caffeine extraction phase, the temperature of the laboratory was increased.  Methylene chloride does not usually evaporate at room temperature but being out in the open at an increased temperature triggered the solution to react early on leaving less methylene chloride to react with the caffeine.  This would result in a lesser amount of caffeine extracted from the solution and a lesser yield. 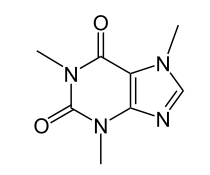 2.  Why is caffeine more soluble in methylene chloride than in water?

3. Describe the purpose of adding sodium carbonate to the reaction mixture?