Light is a wave that carries energy with it. The speed of light is constant, however the wavelength and frequency change.  This gives each wave a different energy which can be described by the equation .  This suggests the longer the wavelength is the less energy it carries. Molecules, atoms and ions all have the ability to absorb or reflect light, depending on the compound. For this reason a spectrophotometer is often used to help determine the unknown concentration of a substance. This knowledge can then be used to help determine the rate of formation or decomposition of a chemical reaction.

The way a spectrophotometer works is by shooting a beam of light at a certain wavelength (usually one that the chemical in question can absorb). This light then passes through a cuvette which contains a sample of the compound. The compound will then absorb a certain amount of the light, depending on the concentration. The higher the concentration is the higher the absorbance. The spectrophotometer then figures the difference between the light it gave out and the light that passed through the cuvette, to find out how much it absorbed1. The beer’s law , where A is the absorbance, ε is extinction coefficient, and l is the length of the cuvette, can then be used to determine the compound’s concentration.

Beer’s law by itself however can not determine concentration perfectly. With spectrophotometry a standard curve is created by graphing A vs known concentrations. A linear relationship is then created, and from it the unknown concentration of a sample can then be found1. In biochemistry this is often done using UV absorption, because the aromatic amino acids absorb at 280 nm, which allows for proteins to be studied without using a dye, especially non enzymatic proteins.

If a protein does not an aromatic amino acid, the dye coomassie brilliant blue G-250 is used to detect the concentrations of proteins. The dye is red and binds to the positive charges on a protein1. When this happens the dye turns blue.  This process is called the Bradford method. In this lab the Bradford method and UV method to detect the concentrations of NAD+ and NADH.

Turn on UV and vis lamps in the spectrometer and select baseline correction.

Add 5 μl of NADH to the cuvette of water.

Scan and save data

Add 200 μl of Bradford reagent to each cuvette

Let cuvettes sit for 10 minutes then run the spectrometer 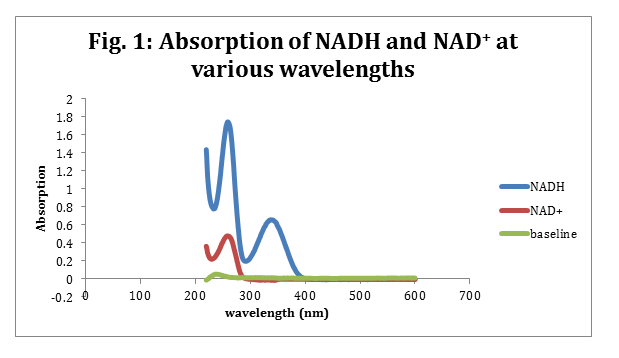 Each concentration was then plotted against their respective absorbance’s and the best fit line’s equation was. 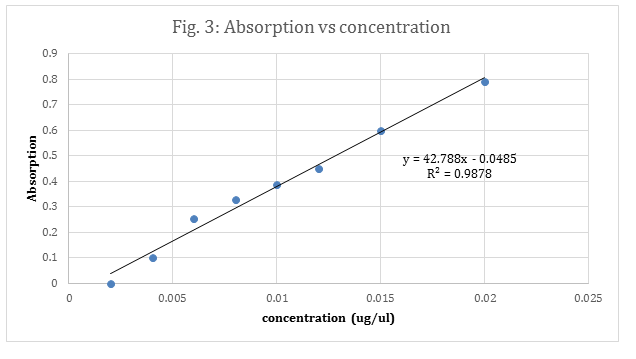 The absorbance for the unknown BSA was originally 1.303, thus it was diluted by a factor of 10X. This was calculated using equation 2. Then 1 μl of the newly diluted unknown was used mixed with 99 μl of DI water and mixed with the Bradford reagent and water. This dilution was calculated to be 100X dilution using equation 2. The total dilution of the unknown was determined by multiply the two dilutions together (10 X 100) to get the final dilution of 1000X.

NADH and NAD+ have both been studied and their extinct coefficient have both been determined. Both NADH and NAD+ have aromatic rings, which allow them to absorb light at 338 nm and 259 nm respectively. For this reason the UV/vis can be ran on just the NADH and NAD+ diluted with water. No Bradford agent is needed. Figure 1, shows the absorbance for NADH and NAD+ over a range of wavelengths. NADH has 2 major peaks, but the tallest overlaps with NAD+’s single peak. This suggests that NADH’s second peak is due to it being oxidized into NAD+. For this reason the peak at 338 nm was taken to be NADH’s maximum peak.

A surprising factor in figure 1 is that upon close inspection, the baseline is not a perfectly straight line. Few variations occur, which means that the water could have a slight containment that would absorb some of the light, or that the machine is not 100% perfect and will give a few variations in its reading. This is more plausible, because although our maximum wavelength for NAD+ was spot on for the given value of NAD+’s max wavelength, the NADH’s max wavelength was off by 2 nm.

For proteins that have few or do not have aromatic amino acids in them a plane UV/vis will not work. There will be no aromatic compounds to absorb wavelengths. When this occurs the Bradford agent is great for determining a unknown concentration, because it is negatively charge and will bind to a protein’s positively charged regions.2 When this occurs the dye turns from red to blue allowing the spectrometer to read the absorbance. Figure 1 is a standard curve using the Bradford agent to help measure a known BSA concentration’s absorbance. This standard curve then help determined the concentration of an unknown sample’s concentration. The sample’s absorbance was compared to figure 3, and the concentration was determined to be 0..

The other reason why using the Bradford reagent method is more effective for measuring the concentration of proteins is because the Bradford reagent to make a standard curve does not require a protein’s extinct coefficient. Even if a protein has tons of aromatic amino acids, a UV/Vis can not determine a sample’s concentration. This is because beer’s law(eq 1) does not work without the extinct coefficient.