The proton uptake of thylakoid membranes during photosynthesis was analyzed through measuring pH. As light reaches the plant, the chlorophyll begins to absorb and release excited electrons. As the electrons pass through the Quinone they increase the Proton concentration on one side of the thylakoid membrane. This then drives the ATP synthase to form ATP from ADP by means of channeling the protons to turn the synthase. The net process is described by scheme 1 below, taken from: http://en.wikipedia.org/wiki/File:Thylakoid_membrane.png 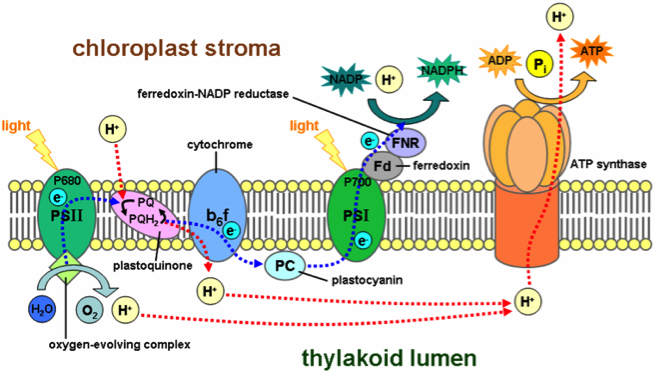 As the light enters the chlorophyll, emission of electrons begin a cycle of reactions. The evolution of oxygen and protons is completed by the splitting of water molecules by the light activated chlorophyll electron. The electron is then processed by Quinone structures, which also integrate a proton gradient on the inside of the thylakoid membrane. The electron chain ultimately finishes with the reduction of NADP to NADPH. This increase of protons on one side of the membrane is driven to diffuse to a lower concentration, and it is here where ATP synthase channels are used. The Protons are used to turn the synthase in order to form ATP from ADP and phosphates. The electron is restored to the chlorophyll by the above-mentioned process, which is known as photolysis. The net reaction goes as follows:

The first part of our experiment was to determine the concentration of chlorophyll in our pellets. The UV-Vis was taken and resulted in a spectrum noted below. 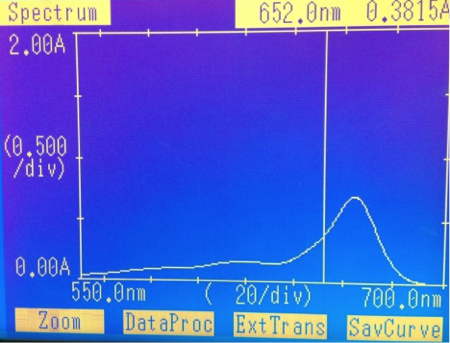 In our experiment, we were able to measure the pH change as a function of time with respect to altering the presence of light. As light reaches the thylakoid suspension, protons are taken into the membrane via the process described above, and we observe an increase in the pH. The moving of protons through the membrane increases the pH of the solution outside of the membrane. When the light is turned off, photosynthesis does not occur and the proton gradient outside the membrane increases which decreases the pH.        The change in pH was measured using pH meters and was recorded as a function of time. The rate at which the pH changed was found, and is presented below in table 1.

Table 1 describes the change in pH relative to time. As the light is turned on and off, the change in pH is recorded by the pH meter, as well as the elapsed time. This results in a change of pH/min, which is also noted above. The initial rates of change without the addition of ADP can be compared as light off and on cycles. The off cycles yielded a rate of change of .008721, and .009574 respectively. As the cycles occurred, the rate of change increased by a matter of .000853 pH units. The on cycles resulted in a change of pH/min of -.029412, and -.0214286. The difference of .00798pH units/min of the two cycles is observed. This is due to the decrease in efficiency of the cycle as there is now less ADP to convert to ATP, and therefore the concentration of H+ continues to build inside the membrane without being transported out through the synthase. Upon addition of more ADP, the process is reset and eventually becomes consumed resulting in a more acidic environment. Both experiments resulted in an overall increase of H+ ions due to the decrease of readily available ADP, which is used to convert into ATP by the synthase. The maximal proton uptake occurred when the light was first turned on. The first light cycle resulted in a net pH change of .04 and .05 for both reactions. The proton uptake seemed to be consistent throughout the experiment. The difference occurred when the light was off.

During the light off cycles, the pH change occurred about .1 units. Significantly much more than the light on cycles. This is due to the movement of protons through the synthase making the concentration of protons outside the membrane greater. The overall trend of reaching a more acidic pH is observed between cycling light on and off.  The change in baseline pH without ADP addition resulted in .09 units. The ADP addition baseline difference resulted in a much greater result of .2 units.

Other observations made in this lab resulted in learning techniques used to measure proton gradients across a membrane. The isolation of chlorophyll containing thylakoid membranes through centrifugation was new concept I haven’t explored before. The effects of ADP addition were studied closely resulting in a large change of pH due to the mechanisms of the Synthase and proton gradient across the membrane. A more firm understanding of photosynthesis was achieved through the execution of this lab.

2)    One of the roles of manganese in biological plant systems includes its role as an oxidoreductase. The oxidoreductase EC 1.6 act on NADH and NADPH. The manganese-centered oxidoreductase is an enzyme that catalyzes the transfer of electrons from the reductant to the oxidant, usually using NADP or NAD+ co-factors. This helps the electron transfer through the thylakoid membrane, which ultimately cause the proton gradient as the electron moves through Quinone structured molecules.

Inside a thylakoid membrane, a proton gradient is formed as light reaches the chlorophyll. When light excites the chlorophyll, H+ protons begin to build up inside the membrane. This increase is due to the channeling of H+ ions from the outside in. The H+ are then used to drive the ATP synthase formation from ADP and a phosphate. As mentioned earlier and demonstrated by scheme 1. The proton gradient is formed by excitation of chlorophyll by light at the correct wavelength. This causes a release of an electron, which is channeled through the membrane, moving protons from outside the membrane in. The replacement of the electron is accomplished by photolysis of water into protons and oxygen. The protons are then used in the ATP synthase that rotate, turning ADP into ATP.