C-fern spores have the ability of exhibiting both male and hermaphroditic sexes. Hermaphroditic gametophytes are always developed first, and if they release enough of the pheromone antheridiogen, male gametophytes will develop. Higher spore densities should show evidence of higher male populations. The gametophyte development can be observed under dissecting microscopes. Population densities were calculated each week for three weeks and based off of data collected, male population was slightly higher in higher density environments, but further experimentation would be needed to confirm.

The C-fern spore is a species that is capable of developing as a male or hermaphrodite gametophyte and, because of this, is useful for studying sex determination (Hickok 1998). Sex is determined by the pheromone antheridiogen and are easily distinguished by size and shape (Banks 1997). Gametophytes that germinate early and develop first are hermaphroditic. These are heart shaped and possess a meristem. Males develop from the hermaphrodites and are smaller and thumb shaped, surrounded by antheridia (Hickok 1998). The goal of this experiment is to observe whether population density of the spores have an effect on the population of male gametophytes in a given area. We hypothesized that if the population density of the spores is higher, then more male gametophytes will develop than lower densities.

This lab took about three weeks in full. The first week started by inoculating five plates of C-fern spores at varying densities. Five vials of varying densities of spores suspended in solution were presented. 250mL of each solution was removed and spread across five different plates labeled A-E, with A having the highest density solution and E having the lowest density. The initial density was determined by counting the number of spores in each dish under a dissection microscope, then dividing that number by the area of the dish.

The data are indicative of a slight increase in percentage of male as a function of density. There are two outliers in gametophyte density that skews the slope of 0.166 significantly. The value of R2 is very low at 0.0103.

Overall, there is a very slight increase in percentage male gametophytes with the data from the class as the R value is positive, but further studies would be necessary to determine anything for certain. It makes sense for percentage males to increase with more density overall because hermaphroditic gametophytes are those that secrete the pheromone that lead to male production (Banks). With more pheromone released by the hermaphrodites due to more of them being present, more should develop into males.

One of the likeliest reasons for the low R2 value was that groups may have taken the most populated area as a sample to represent the entire population. Counting the entire dish of gametophytes, rather than a small sample of it to represent the dish, would have given the most accurate sample and the data would have likely fallen in range with the rest of the data.  While the hypothesis isn’t strongly supported, there is evidence that male population should increase with overall population and further studies could provide more answers. 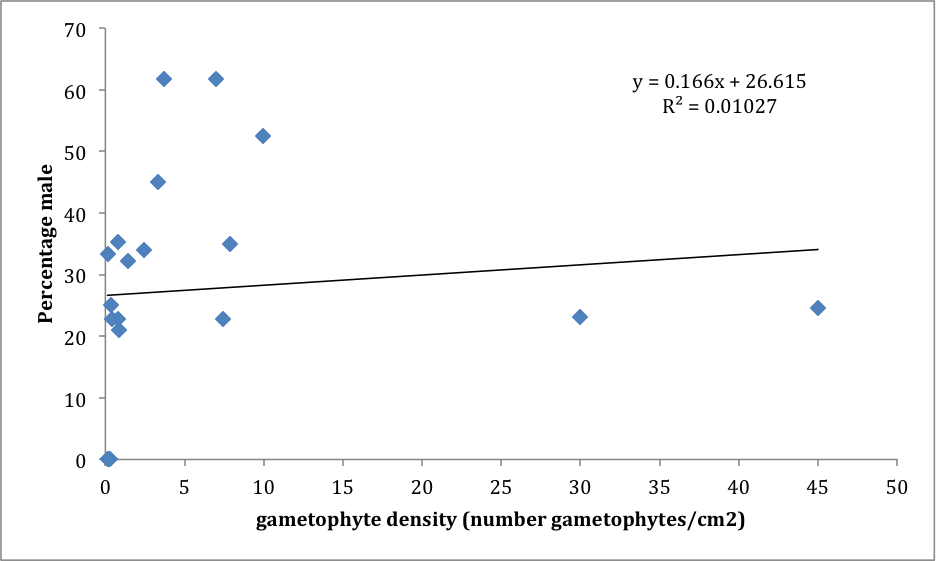