Measuring the Melting Points of Compounds and Mixtures

Measuring the Melting Points of Compounds and Mixtures

Our unknown for this experiment was #4.

From the graph made in the post-lab questions, the following information about the mixtures can be determined: 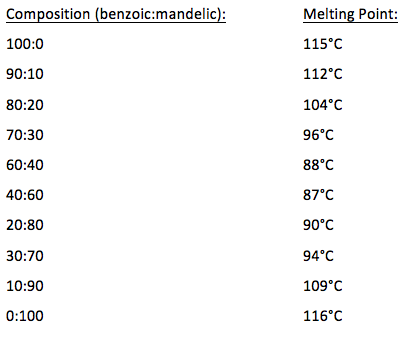 Now, to look at what we learned from the second section of the experiment. To identify the unknown, we followed the procedure of the flow chart in Figure 1. 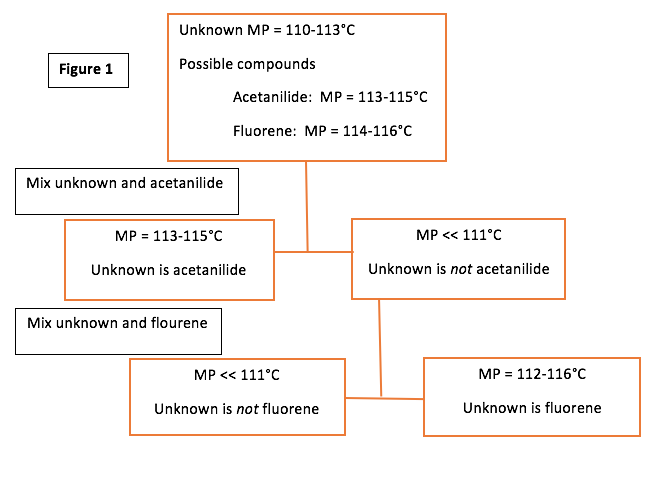 Also, we were told to simultaneously measure the melting points of each mixture and the pure unknown.  The reason for this would be so that we could easily see if the unknown and the mixture were melting similarly (at the same rate).

For the first section, our results gave us a good basis to say that the eutectic temperature is 80°C and the eutectic composition is 50% each of the benzoic and mandelic acids.  We were only able to determine this information because of the very relevant information we found in our measurements of the melting points of the various mixtures of benzoic acid and mandelic acid.

In this lab, I learned how to fill/pack capillary tubes, and how to use the MelTemp equipment.  I had previously known that melting points can be a way to determine an unknown, but had not previously practiced it myself.  I was able to do this in this lab as well.  If I was to repeat this procedure, I would probably start slowing the rising temperature a little lower, so as to obtain the most accurate melting points I possibly could.