Measuring Respiration of Germinating and Non-germinating Peas
By: Krunal Patel

Living cells require transfusions of energy from outside sources to perform their many tasks – for example, assembling polymers, pumping substances across membranes, moving, and reproducing (Campbell, and Reece 162). Heterotrophs obtains its energy for its cells by eating plants that makes it own food (Autotrophs); some animals feed on other organisms that eat plants. The most beneficial catabolic pathway in an organism is cellular respiration, in which oxygen and glucose are consumed and where carbon and water become the waste products. The purpose of cellular respiration is to convert glucose into ATP(energy) for the organism. Respiration consists of glycolysis, the Krebs Cycle, and the oxidative  phosphorylation. Glycolysis, which occurs in the cytosol, breaks the six carbon glucose molecule into two pyruvates. During this stage two ATP and two NADH molecules are made. The next step in respiration is the Krebs cycle. The Krebs cycle uses the two pyruvates made during glycolysis and converts them to Acetyl-CoA and carbon dioxide to make three NADH, one FADH2,  and two CO2 through redox reactions, and goes to the Electron Transport Chain. ATP is also formed during the Krebs cycle (Campbell, and Reece 166). Since two pyruvates are made during glycolysis, the Krebs cycle repeats two times to produce four CO2, six NADH, two FADH2, and two ATP (Campbell, and Reese 166). The last stage in cellular respiration is the Oxidative phosphorylation Electron Transport. The Oxidative phosphorylation occurs in the inner membrane of the mitochondria. The electron transport chain is powered by electrons from electron carrier molecules NADH and FADH2 (Campbell, and Reese 166). As the electrons flow through the electron chain, the loss of energy by the electrons is used to power the pumping of electrons across the inner membrane. At the end of the electron transport chain, the electrons from the inner membrane bind to two flowing hydrogen ions to form water molecules. The protons, outside the inner membrane, flow down the ATP gradient and make a total of thirty two ATP (Campbell, and Reese 166).

In this experiment, an apparatus called a respirometer is used. A respirometer is a tool used to observe exactly how much oxygen was consumed by the peas and the glass beads. Since the carbon dioxide produced is removed by reaction with potassium hydroxide (Forming K2CO3 + H2O as shown below), as oxygen is used by cellular respiration the volume of gas in the respirometer will decrease. As the volume of gas decreases, water will move into the pipet. This decrease of volume, as read from the scale printed on the pipet, will be measured as the rate of cellular respiration (Cell Respiration).

Setup of Respirometers and Water Baths

Respirometer 3: Refill the graduated tube to 25 mL with of H2O. Add enough glass beads to equal the volume of the germinating peas. Remove these beads and place them on a paper towel.

Insert stopper fitted with a calibrated pipet into each respirometer vial. The stopper must fit tightly. If the respirometers leak during the experiment, you will have to start over.

Placement of Respirometers in Water Baths

Place a set of respirometers (1, 2, and 3) in each water bath with their pipet tips resting on lip of the tray. Wait five minutes before proceeding. This is to allow time for the respirometers to reach thermal equilibrium with the water. If any of the respirometers begins to fill with water, the experiment will have to restarted.

After the equilibrium period, immerse all respirometers (including pipet tips) in the water bath. Position the respirometers so that it’s easy to read the scales on the pipets. The paper should be under the pipets to make reading them easier. Do not put anything else into the water bath or take anything out until all readings have been completed.

Allow the respirometers to equilibrate for another five minutes. Then, observe the initial volume reading on the scale to the nearest 0.01 mL. Record the data in Table 1 for Time 0. Also, observe and record the temperature. Repeat your observations and record them every five minutes for 20 minutes.

*All values are in mL except °C and Time

*All values are in mL °C and Time 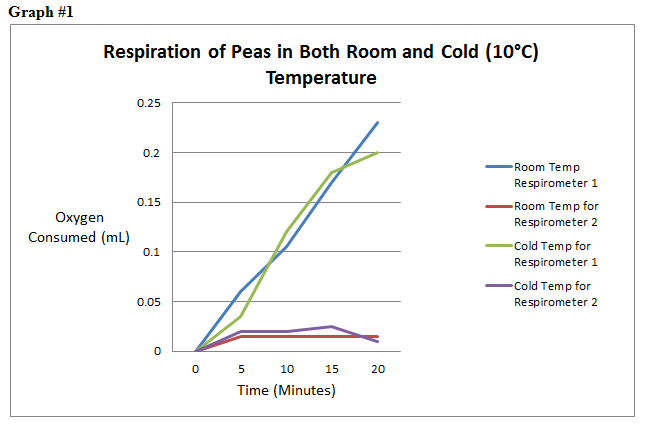 Numerous errors could have occurred during the lab. Miscalculation of the glass beads which went into the respirometer, and hence would ruin the controlled results. The seals on the respirators may not have been completely air-tight which may have caused a leak and therefore oxygen would have been lost altering the data.  The temperature may have been slightly off in the water baths. There was also the problem of reading the scales on the pipets which could have lead to improper measurements of the water position.

To improve this experiment, more accurate and precise instruments can be used such as a advanced pipet which has scales that are easy to read. Also a completely air tight respirometer instead of using petroleum jelly which water can still leak in.