The purpose of this experiment was to create and purify a product from 2 different reactions. The first reaction was a reduction of an aldehyde and the second was an acid-catalyzed etherification. This type of reaction is important because from it many derivatives (fragrances) are created. This is called organoleptic chemistry. In order to achieve this derivative, separatory funnels were used, reflux was utilized in coordination with TLC analysis in some cases, rotary evaporation was used and finally column chromatography to purify the product. To analyze said product and its intermediate, TL and NMR techniques were utilized.

To begin the experiment, 1.49 g of Aldehyde B (Piperonal) were dissolved in 10 mL of MeOH in a

125 mL Erlenmeyer flask. The flask was then placed in an ice water bath and 0.4 g of sodium borohydride were added in small portions and the flask was removed for 25 minutes until the bubbling ceased. The flask was then placed back into the bath and 10 mL of 3 M HCl were added. This was swirled until the bubbling subsided. 20 mL of ethyl acetate were added to the flask and transferred to a separatory funnel. The organic layer was extracted by adding 10 mL of water twice and 10 mL of saturated NaCl once. The organic layer was then transferred to a clean flask. Magnesium sulfate was added to absorb the extra water and this was gravity filtered into a round bottom flask to be rotary evaporated. 1.029 g of the intermediate (Piperonyl alcohol) were created. The IR and NMR were obtained for characterization and purity analyses.

0.5 g of Amberlyst 15 beads were placed into a 100 mL round bottom flask and washed with 5 mL ethanol. 5 mL of ethanol were added to the beads and 0.743 g of Piperonyl alcohol was dissolved in another 5 mL of ethanol. A drop of the mixture was added to a TLC plate to determine when the starting material was no longer in the flask. The solution was refluxed for 45 minutes until the TLC plate showed no sign of starting material. Then the solution was gravity filtered into a small beaker and the flask was washed with methylene chloride. This solution was transferred to a separatory funnel and 20 mL of methylene chloride were added and the organic layer was drained into another flask since it was on the bottom. The drained layer was then washed thrice with 10 mL of water. Magnesium sulfate was added and the solution was gravity filtered and rotary evaporated. The mass of the crude product was .385 g.

The third part of the experiment was the purification of the ether by column chromatography. A column was set up and the hexane to ethyl acetate solvent ratio was determined to be 6:1 by TLC analysis. Fractions were run off the column until the there was a pure product determined by TLC with a Rf around .3. Those fractions were then rotary evaporated and the mass of the pure product was 0.243 g. 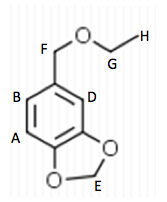 The goal of this experiment was to carry out a multiple-step synthesis reaction in order to develop a benzyl ether derivative. This was done by reduction the aldehyde to create an alcohol and then performing an etherification reaction by adding another alcohol. These reactions have major importance because of the variety of the derivatives that can be created from a single aldehyde, a science called organoleptic chemistry. Major procedural techniques were reflux, funnel separation, and rotary evaporation. Reflux is a technique that accelerates and maximizes the efficiency of a chemical reaction by stirring and heating a solution. Funnel separation is a purification technique that allows for the organic layer of a solution to be removed from the aqueous layer after a reaction, this will remove some of the solvents or reagents and what doesn’t get removed will be in rotary evaporation. Rotary evaporation removes the solvent from the solution which then solidifies the desired product. Major analysis techniques were IR, NMR, and TLC in this lab. IR spectroscopy exposes the organic molecules to infrared radiation and based on the energy given off by the vibrations of the bonds in the molecule, absorption occurs and an IR spectrum can be given. NMR calculates the energy of protons based off aligning and opposing spins caused by a magnetic field. TLC uses a solvent that carries the pieces of a spot up a plate based on the polarities of its components. The major purification technique utilized in this lab was column chromatography. It is similar to TLC in that an eluent carries components of a solution through a stationary phase, but in column chromatography the components are able to be separated and therefore isolated into pure products.

To start the multi-step synthesis, the aldehyde was reduced to an alcohol. This was done by utilizing the reducing agent, NaBH4, to decrease the number of oxygen bonds from 4 to 3 and then the addition of acid allowed for the increase of hydrogen bonds to form the alcohol. This process was then purified by using separatory techniques. Ethyl acetate was used to dissolve the solids, so the organic

layer was on top when the separatory funnel was settled. Once the organic layer had been washed a rotary evaporator was used in order to evaporate impurities and change the liquid intermediate into solid intermediate. Here, 1.029 g of the intermediate (piperonyl alcohol) was created. A possible error in the yield could have been from not allowing the reaction to go to completion after the addition of NaBH4. IR and NMR spectroscopy was used in order to determine the purity of the intermediate. IR spectroscopy showed a peak at 2986.82 cm-1 which correlated to a C-H bond which should be expected in any organic molecule, but the peaks that were specifically consistent with its structure were at 1490.07 cm-1, 1275.61 cm-1, and 810.03 cm-1. These peaks correlated to a C=C aromatic bond, C-O alcohol bond, and C-H aromatic bond. Even though most of these peaks were weak in strength, they were necessary in determining the structure. There were some peaks missing in accordance to the structure, so the intermediate wasn’t all that pure. This could be a possible error in yield and purity going on with Parts 2 and 3 in the experiment. The NMR was a little cluttered, but a ratio on the integration was found in order to get better results. There were 6 main peaks, 3 of which that fell in the aromatic region (6.5 – 8 ppm) and 1, at 2.03 ppm, corresponded to the hydrogen on the alcohol group. The assignments, therefore, were easily justified and although the NMR seemed to have extraneous peaks, the data reported was fairly accurate.

The next step was to purify the product and this was done by column chromatography and TLC analysis. The eluent wasn’t given in this step; so in order to find a sufficient eluent, TLCs were run until the product had an Rf value of 0.3. This Rf value was found having a solvent in a 6:1 hexane to ethyl acetate ratio. This solvent was used as the mobile phase in the column chromatography and only pure fractions with an Rf value around 0.3 were transferred to a flask for rotary evaporation. Fractions 7-9 were found to be the purest and after rotary evaporation, 0.243 g of product was made. This amount is barely a quarter of the theoretical yield (27.61%), which suggested that errors were made during column chromatography. One such error could have been having too large of fractions; this would cause some of the either starting material or other reagents to run-off into the pure compound fractions. On the TLC analysis it would show up as impure even though there is some compound in it which would create less yield. Once the solid was collect IR and NMR samples were prepared and analyzed. The IR was accurate and had all significant bond types including both aromatic and aliphatic C-O ether bonds. This was a crucial difference in the product compared to the intermediate’s IR. They both had aromatic peaks, but the ether in the product was a major difference in determining the purity of the product. The IR again was a little cluttered, but during the analysis, 7 different protons were able to be found. The extra proton came from the ethanol reacting with piperonyl alcohol to get an ethyl chain as a part of the ether. These protons on the chain were easily spotted because of the multiplicity. All the aromatic protons a part of the piperonyl chain were either singlets or doublets, and the ethyl chain had a quartet and triplet. The integration again had to be reduced by a factor in order to get the correct numbers. Although the yield was relatively low, the NMR was fairly accurate. The product and intermediate also had the 3 different protons in the aromatic region (6.5-8 ppm) in both NMR which is accurate with the structure and then another proton at around 5.9 ppm for both which correlated to the set in the ring at the very bottom of the molecule.

1. The advantage of Amberlyst 15 beads being used is that they do not dissolve, so when added to the system they are easily separated by gravity filtration once the reaction is complete. This also makes the neutralization of the solution simple, because simply removing them from the solution causes neutralization.

NaBH4 is a reducing agent, and the aldehyde group can be reduced to an alcohol because it is on a primary carbon.

NaBH4 is a reducing agent, and the ketone group can be reduced to an alcohol because it is on a secondary carbon.

3. a. If the HCl were not added to the first part, then the reduction of the aldehyde would not have been complete, the oxygen would have remained with a negative charge and therefore would have been washed away during the separatory funnel technique. Therefore no product would have been made because no intermediate would have formed.

b. If NaOH were added instead of HCl, then essentially the same thing would happen. Since the oxygen has a negative charge from the reduction, it wouldn’t have been neutralized and no intermediate or product would be formed.
c. If the Amberlyst beads were not removed, then the solution would have not been neutralized and after evaporation, there would be an artificially high mass.

d. If the organic layer wasn’t washed with water, then the charged species that didn’t fully react would still be in the solution and wouldn’t be separated to the aqueous layer. This would cause an artificially high mass again and would affect the purity of the product.