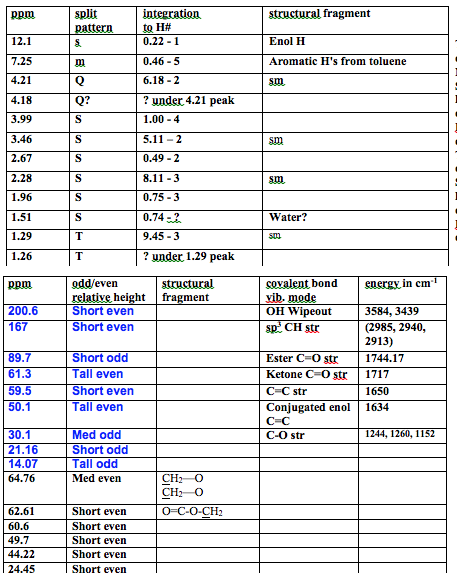 Provide your experimental index of refraction and correction factor: 1.4229 @ 22ºC

1:1 ratio of prods to reacts and reacts to reacts 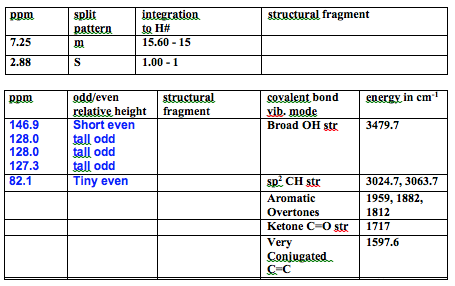 Ethyl acetoacetate was reacted with ethylene glycol by an acid catalyzed nucleophilic addition across the ketone’s carbonyl using p-toluene sulfonic acid (pTsOH) in toluene to form a diether ketal ester will be reacted further with two equivalents of phenylmagnesiumbromide (which was formed by reacting phenyl bromide with magneisum) by nucleophilic substitution/addition, which was worked up in acidified water to yield ethyl acetoacetate ethylene acetal.  For the acid catalyzed addition, ethyl acetoacetate, toluene and a speck of pTsOH were added to a Round bottom flask (RBF) to yield a clear solution.  Ethylene glycol was added and clear, beady liquid formed at the bottom of the solution showing that ethylene glycol is not soluble in toluene.  The solution was set to stir and reflux, and after the reflux the solution remained clear and colorless, but the bottom beady layer seemed to disappear indicating that the ethylene glycol should have created with the ethyl acetoacetate.

The solution was then distilled at a temperature of 104 ºC.  Initially all the solution coming over was one phase and cloud this is not good because it should be forming a water co-product and coming over as a bi-phasic solution.  Eventually the bi-phasic solution of water and toluene began to come over and be collected, indicating the reaction was proceeding and forming the water co-product.  The distillate was gray and cloudy indicating possible starting material/product coming over.  The distillation was stopped when the solution being distilled seemed clear and free of water, despite not getting the anticipated amount of water co-product collected.  The solution was then washed using NaOH to neutralize the acid, and water to remove any left over salts from the acid/base.  This was capped and dried over salts overnight.

For the methyl benzoate and gringard, silver Mg was ground in mortal in pestal and put in a RBF with clear diethyl ether.  This was attached to a dry reflux set up and addition funnel.  Clear bromobenzene in diethyl ether was put in the addition funnel.  I2 was added to the RBF, which turned it yellow, this was to promote gringard formation.  A splash of the PhBr was added to start the gringard formation reaction.  The mixture turned grey and more PhBr was added dropwise.  The mixture began to fizz and turned light brown, which indicates formation of the gringard.  The PhBr was continually added dropwise while the solution refluxed.  The mixture turned dark brown, and there was noticeably less Mg, both of which indicate formation of the gringard.

Methyl Benzoate in ether was added to the addition funnel and added dropwise to the mixture.  The solution turned wine/red and cleared up, there was still Mg though.  This indicates the reaction of the gringard and the methyl benzoate is taking place.  This was refluxed which turned it opaque red/orange and precipitate formed showing that the gringard reaction has successfully taken place.  This was cooled and quenched with H2SO4 and NaHSO3.  This created a lot of bubbling showing the Mg reacting with the acid to form the Mg salts.  This yielded a solution with a clear yellow layer on top and a cloudy white/yellow translucent layer on bottom.

An extraction series of H2SO4 (to remove Mg salts), sat’d NaCl (to remove acid), NaHCO3 (to neutralize trace acid), and sat’d NaCl (to remove water) to yield a slightly cloudy light yellow solution.  This was dried over salts which cleared the solution up.  After drying the solution was rotovapped half way down until white crystals formed in solution.  This was chilled to drop more crystals, and then filtered with a hirsch funnel and a ligroin rinse.  The filtration yielded white shiny crystals which were dried between filter paper.  A lot more crystals formed in the filtrate, but there were plenty for analyzation, so they were left.  The crystals collected were analyzed using melting point, IR spec, and 13C and 1H NMR.

The 13C NMR had a few more peaks.  There were aromatic peaks consistent with mono-substituted benzene rings (146.98 ppm – short even, 128.07 ppm – tall odd, 128.04 ppm – tall odd, 127.36 ppm – medium odd).  There is also a tiny even peak at 82.16 ppm which correlates to the carbon attached to the hydroxy and benzene rings.  All this data matches the literature within 0.3 ppm.1  There were no other peaks which agrees with the proton NMR in that the product is clean.

A melting point was run at 47 voltage and found to be 165.4-167.1 °C, this is not broadened out 2 degree window, but it is out of the error of +/- 3 degrees from literature (160-163 °C).  The melt-temp has seemed to run high lately, so that is likely the reason for the elevated melting point.  Therefore, this data agrees with all the other data that the product is pure.

The mass recovery was 3.405 g which is 35.6 % yield.  Yield was so low because so many crystals formed and were left in the filtrate.  At the beginning not all of the Mg did not react, so the reaction did not go to completion for the gringard formation.  Also when I came back to do the work up the next week, my RBF was on its side and some may have came out.  Additionally, the mixture could have been rotovapped a bit more to drop more crystals.

For the triphenylmethanol all of the data agrees that the product was pure.  The yield was low, but mostly because the crystals in the filtrate were not collected.

Overall, the first reaction to make the ketal ester yielded almost all unreacted starting material, and in low yield, so that product and reaction scheme was given up on.  Instead methyl benzoate was reacted phenyl magnesium bromide to yield 3.405 g of white shiny triphenylmethanol crystals.  The product was pure, but in low yield due to the lack of collection of crystals in the filtrate.