Benzilic acid was synthesized through a multistep reaction from the starting material of benzaldehyde and through the formations of benzoin and benzil.  The first reaction produced benzoin by using the thiamine hydrochloride catalyst, followed by an oxidation reaction to produce benzil, and a rearrangement to synthesize benzilic acid.  By utilizing crystallization, pure solid products of each step were collected and analyzed through IR, NMR spectroscopy, and other physical properties.

Introduction
Multistep synthesis reactions involve many advantages and disadvantages.  Disadvantages include time-consuming experiments, error within intermediate steps, or the presence of side reactions.  Advantages imply the production of ideal, marketable end products, and the synthesis of compounds that otherwise could not be produced through a simple reaction.  Research has enhanced the sustainability, time efficiency, and design of multistep synthesis reactions to be utilized in many industrial situations.1

Different organic processes and characteristics were utilized in the multistep synthesis involved in this reaction.  Green chemistry was involved in the preparation of benzoin by the choice of catalysis, thiamine hydrochloride.  In a biochemical environment, thiamine acts as a coenzyme that proceeds as the chemical reagent.2  Regarding the second step, an oxidation reaction was involved utilizing a mild oxidizing reagent, nitric acid, in pyridine.  Finally, the third step of this reaction involved the compound benzil that has attracted many speculations throughout the century.  Through the interaction with other molecules, the rearrangement characteristics of benzil have been proven based on the intramolecular oxidation and reduction forces of gaining and losing electrons.3 Overall, the combination of the various organic characteristics and experiments allow for the success of a multistep synthesis reaction.

Reaction Mechanisms
Scheme 1 depicts the reaction between the catalyst thiamine hydrochloride and two equivalents of benzaldehyde.  Once a proton was removed from thiamine hydrochloride, forming ylide, it acted as a nucleophile that allowed for the addition of the carbonyl group of benzaldehyde. A proton is removed from the intermediate and the new alkene bond attacks the carbonyl group of the second benzaldehyde.  The ultimate products of ylide and benzoin are produced.  The ylide is the regenerated catalyst and performs the mechanism again. 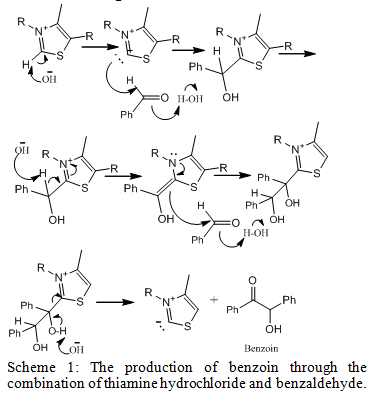 As the second step of the multistep synthesis, the alcohol group of benzoin must be oxidized.  By utilizing the mild oxidizing agent of nitiric acid, benzoin was oxidized to produce benzil through the mechanism in scheme 2. 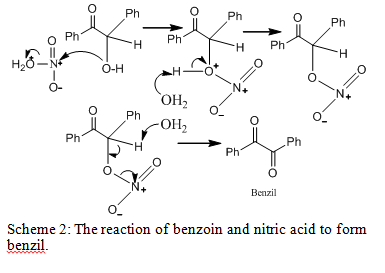 The final mechanism, shown in scheme 3, involves the synthesis of the carboxylate salt intermediate, potassium benzilate, which drives the reaction to produce benzilic acid through workup. 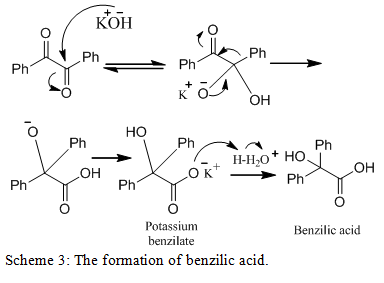 Results and Discussion For the first reaction, the presence of crystals after the combination of the ylide and benzaldehyde appeared pale yellow, solid but mushy.  After filtration, a total of 4.68 g of crude benzoin were collected.  Through recrystallization, a pure product of 2.07 g was collected, which produced a 44% yield.  This product produced a melting point of 129-132 °C.  This corresponds to the melting point of the crude product concluding that purification failed.  Purification could have been improved by adding more 95% ethanol to wash the crude product.  The final product of benzoin contained 13C NMR peaks at 199.2 ppm accounting for the carbonyl group and eight peaks in the range of 139.0-127.8 ppm representing the alkene bonds as well as the carbons of the aromatic rings.  Finally, a peak at 76.2 ppm represented the carbon with the alcohol group attached.  Regarding the 1H NMR spectra, four multiplet peaks appeared in the range of 7.79 and 7.14 ppm representing the hydrogens surrounding the aromatic rings.  A peak at 5.82 ppm accounted for the hydrogen attached to the carbon containing the alcohol group.  A peak at 3.92 ppm represented the hydrogen of the alcohol group.  An impurity of ethanol appeared at 4.42 ppm.  Finally, the IR spectra displayed a peak at 3403 cm-1 representing the C-H stretches, a peak at 3003 cm-1, accounting for the alcohol group, and a strong peak at 1761 cm-1 representing the carbonyl group.  Overall, the spectra confirmed the condensation of benzoin.

When benzoin was reacted with nitric acid, an orange/red color appeared.  When this mixture was heated and refluxed, a strong red color appeared in the reflux condenser, proving the presence of nitric gas.  A total of 1.91 g of purified benzil was produced from this reaction which contained an observed melting point of 89-92 °C and a 77% yield.  This appeared to be less than the ideal melting point of 95 °C, which could account for the lack of purity.  The 13C NMR produced a peak at 192.0 ppm representing the two carbonyl groups.  Four peaks appeared between 132.3 and 126.5 ppm accounting for the carbons within the aromatic ring and the alkene bonds.  The 1H NMR displayed three multiplet peaks at 7.86, 7.56, and 7.53 ppm representing the hydrogens around the aromatic ring that coupled with the surrounding hydrogens.  Finally, the IR spectrum produced a C-H stretch peak at 3010 cm-1 and a carbonyl peak at 1668    cm-1.  This data proved the success of the oxidation of benzoin to produce benzil.

For the final reaction, once benzil and aqueous potassium hydroxide were combined, the reaction turned from black to brown.  This intermediate step produced potassium benzilate.  After workup, a total of 0.41 g of the crystallized product were collected, which produced a melting point of 151-152 °C and a 17% yield.  The melting point corresponded to the known melting point of 150 °C. The 13C NMR spectra displayed a weak peak at 175.8 ppm, which accounted for the carbonyl group within the carboxylic acid.  Four peaks at 141.4, 128.3, 128.2, and 127.4 ppm represented the carbons within the aromatic rings.  Finally, a peak at 82.0 ppm represented the carbon attached to the alcohol group.  The 1H NMR spectrum produced a peak at 7.47 and 7.26 ppm representing the two groups of equivalent hydrogens attached to the aromatic rings.  A peak at 2.18 ppm represented the hydrogen of the alcohol group.  A peak did not appear at 12 ppm that would have represented the hydrogen of the carboxylic group, which means the reaction was not carried to completion.  In the IR spectrum, a hydroxyl peak appeared at 3399 cm-1.  A broad peak appeared at 2889 cm-1 representing the carboxylic acid functional group of compound.  Finally, a peak at 1718 cm-1 represented the carbonyl group and a peak at 1177 cm-1 accounted for the carbon-oxygen bond in both alcohol groups.  From this data and the low percent yield, the rearrangement of benzil was not achieved successfully.

General: All reagents were provided by Texas A&M University Chemistry Department. 1H and 13C spectra were taken on a Mercury 300 MHz NMR spectrometer.  An IR spectrum was provided by PerkinElmer UATR Two Spectrophotometer.