The Preparation of Nickel(II) Complexes: Linkage Isomers
By: Trinidad Reyes

The purpose of the nickel (II) complex: linkage isomers experiment was to investigate how the ambidentate properties of the NO2 ligand behave when it is bonded to a nickel atom with respect to its place in the spectrochemical series. The NO2 ligand can be classified as an ambidentate ligand because this ligand contains more than one potential donor atom. Nitrogen and oxygen are considered donor atoms because due elements have lone pairs to donate. This suggests that NO2 can have a binding site at either the nitrogen or oxygen atom to the nickel atom. The existence of ambidentate ligands means that there can be linkage isomers present.7 The nickel (II) complex: linkage isomers experiment synthesizes a series of linkage isomers that designates the binding site to either the nitrogen or oxygen atom, in which has an effect on the overall on the color, geometry, and absorption of light for each product formed.

Before commencing experiment three, lab equipment and chemical hazards must be noted to promote lab safety. The lab equipment that will be used for experiment three includes a hotplate, a Buchner/frit filter apparatus, Erlenmeyer flasks, and beakers. Handle all glassware with care and be attentive of temperatures on the hotplate. Proper lab attire for this experiment includes goggles, a lab coat, and appropriate gloves. Also, the procedure for parts 3, 4, and 5 of experiment three require all reactions to be done in the fume hood.

Methanol and Ethanol are two solvents that are used in experiment three and present potential hazards if not handled properly. The hazardous identification for methanol include irritant to eyes, skin, easily flammable, and fatal if swallowed.1 Methanol should avoid contact with strong oxidizers to prevent any explosive reactions from occuring.1 The hazardous identification for ethanol include irritant to skin, eyes, and fatal if swallowed.2 Ethanol rapidly absorbs moisture from the air and can react vigorously with oxidizers.2 Potassium nitrite is used in part I of experiment three and also results as a byproduct in later parts, but also presents potential hazards. Potassium Nitrite is a strong oxidizer and if it comes in contact with other materials it may erupt a potential fire.3 Potassium Nitrite is harmful if swallowed, inhaled, or absorbed through the skin.3 An acute amount of ethylenediamine is used in part III of experiment three, but emits hazards as well. Ethylenediamine is corrosive and may cause burns to any area of contact.4 Ethylenediamine is harmful if swallowed, inhaled, and absorbed through the skin.4 Chloroform is a solvent used in the optional recrystallization process of part IV and V of experiment three and presents potential hazards. Chloroform is an irritant to skin and eyes if it comes in contact.5 If any chemicals come in contact be sure to wash all areas thoroughly with water and soap.

Before beginning part III, IV, and V of experiment three a number of precursors must be done. A Buchner funnel/filter flask apparatus must be placed into an oven to reach a temperature of ~60ᵒC. Before continuing onto each part of experiment three, be sure to clean and wash out the Buchner funnel with the appropriate solvent. Also, a frit filter set up must be clean and ready to use on command. Be sure to clean the frit filter apparatus between uses with the appropriate solvent. An ice bath will also be required to help crystallize the collected filtrate. Last, keep a small beaker of ethanol labeled and ready to bring to a boil in the fume hood.

Part III of experiment three was the preparation of bis(ethylenediamine)dinitronickel (II) solid complex. A total of 10.0510 g of hexanitronickelate (II) monohydrate was weighed out and dissolved in 30 mL of methanol in a 250 mL beaker. The orange complex and methanol mixture was covered with a watch glass, and then stirred using a magnetic stirrer for approximately 15 minutes. After the mixture was completely stirred, approximately 2.7 mL of ethylenediamine was slowly added to the orange complex and methanol solution. The orange color that the hexanitronickelate (II) monohydrate and methanol solution had produced was immediately changed to a purple color when the ethylenediamine was added. The beaker containing the mixtures was then covered with a watch glass and heated to boiling until the brown color has just disappeared. It’s important that overheating the solution does occur because all the methanol solvent can be boiled out of solution leaving a useless sludge behind. After a considerable amount of boiling, only pink and red solid matter was observed. The pink filtrate containing the red solid was then filtered through a preheated Buchner funnel. The reddish filtrate was then placed into an ice bath for 20 minutes in order to help with crystallization. After 20 minutes of the filtrate sitting in the ice bath the red filtrate was then filtered using a frit filter apparatus. The red solid that was left behind in the frit filter is bis(ethylenediamine)dinitronickel (II) solid complex. The red solid was then broken up and allowed to dry over a course of a week.

Part IV of experiment three was the preparation of bis(N,N-diethylethylenediamine)dinitronickel (II) solid complex. In a 250 mL Erlenmeyer flask 6 mL of N,N-diethylethylenediamine and 40 mL of ethanol were mixed together. A total of 10.0014g of hexanitronickelate (II) monohydrate was weighted out in poured into a separate 250 mL beaker. Once the orange complex is obtained the 6 mL of N,N-diethylethylenediamine and 40 mL of ethanol was poured into the 250 mL beaker containing the orange complex. Immediately the orange complex color turned into a dark brown color. The brown mixture was set on a hot plate, covered with a watch glass, and was heated to the boiling point of ethanol, while being stirred simultaneously. The mixture was stirred and heated for 45 minutes while a change from brown to blue color was observed. Orange solid was observed beneath the blue liquid indicating the reaction had not proceeded completely. After another 20 minutes of stirring and heating the orange solid beneath the blue liquid had change to a white solid. The blue filtrate containing the white solid was then Buchner funneled leaving the white solid in the filter paper. The blue filtrate was then put in an ice bath for 15 minutes to help crystallized the product faster. After 15 minutes of the blue filtrate sitting in the ice bath, the blue solution was then frit filtered. After frit filtering the blue filtrate, a blue solid was left behind in the frit filter. The blue solid obtained from frit filtering was bis(N,N-diethylethylenediamine)dinitronickel (II) solid complex. The blue solid was then broken up and allowed to dry over a course of a week.

Part V of experiment three was the preparation of dinitro(N,N,N’,N’-tetramethylethylenediamine)nickel (II) solid complex. In a 250 mL Erlenmeyer flask 5 mL of N, N, N, N’-tetramethylethylenediamine was combined with 25 mL of ethanol. A total of 5.0050g of orange complex was weighted out and placed into a 250 mL beaker. The orange complex was then placed onto a hot plate and stirred for 15 minutes to ensure the orange complex had dissolved completely in the ethanol. The 250 mL Erlenmeyer flask containing the 5 mL of N, N, N, N’-tetramethylethylenediamine and 25 mL of ethanol was then added to the 5.0050g of orange complex. The mixture immediately turned to a brown color. The mixture was then covered with a watch glass and set on the hot plate to be heated to the boiling point of ethanol, while still being stirred simultaneously. After 30 minutes of stirring the mixture went from a brown color to a green color. Beneath the green aqueous layer, the starting orange solid matter turned into a white solid matter. The green filtrate containing the white solid matter was then filtered using a Buchner funnel apparatus. The collected green filtrate was then placed into and ice bath for 25 minutes to help the product form crystals. After letting the filtrate sit in the ice bath for the duration of 25 minutes the blue filtrate was then filtered using a frit filter apparatus. No presence of white solid was observed in the green solid complex that was recovered from the frit filter, so recrystallization of the product using chloroform was unnecessary. The green solid obtained from the frit filter was of dinitro(N,N,N’,N’-tetramethylethylenediamine)nickel(II) solid complex. The green solid was then broken up and allowed to dry over a course of week.

After allowing each complex to dry over a course of a week they were then weighed, placed into small vials, and stored in a desiccator to ensure contamination didn’t occur within the nickel complexes.

The results of the experiment were overall successful except running into the problem of synthesizing the red nickel complex correctly. There seemed to have been a slight confusion in the solvent of choice when dissolving the orange complex. The book requirement was to dissolve the orange complex in 30 mL of methanol, but after three separate trials the orange complex failed to react with the methanol and ethylenediamine that was added to it. The three trials that took place for the red complex were monitored very carefully with respect to the boiling point of methanol. Entertaining the reason why the red complex had failed to be synthesis correctly is due to the fact that the solvent of choice should have been ethanol instead of methanol. The UV-vis for the red complex instructed us to run it in ethanol, which raised the question: why change the solvent of choice at the last minute?

The orange, blue, and green nickel complexes were synthesized correctly. Just below are each of the metal complexes UV-vis graphs. 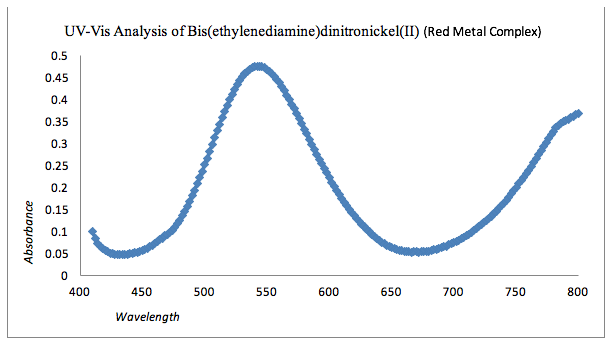 For the red complex, the absorption was between 530nm and 560nm. Using complimentary colors, the red complex would expect to absorb in the green spectrum, which is approximately 489 nm to 570 nm. The given structure for of bis(ethylenediamine)dinitronickel(II) can be seen in the appendix.

A separate experiment of heating a small amount of red complex to observe and record the color changes over time as the compound cools was not able to complete. The reason being for the side experiment to be incomplete was due to not successfully synthesizing the red complex. With this being said no yield or percent yield could be calculated for. 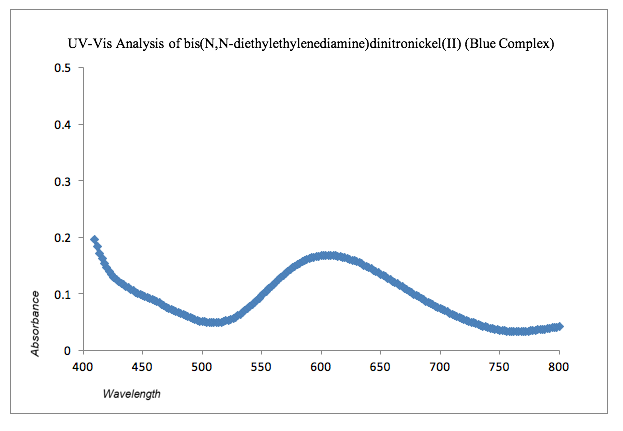 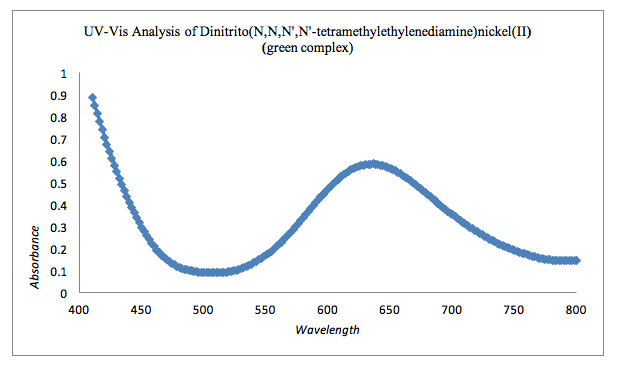 The overall process of the nickel: linkage isomers experiment was successful except to successfully synthesize the red complex correctly. By forming three out of the four complexes with the correct color the ambidentate ligand NO2 correctly oriented itself with the nickel atom. It’s safe to assume all the complexes formed in its proper octahedral geometry with no outside contaminations. This reasoning can be backed by the color of the solid complex produced along with the UV-Vis graphs provided. The experiment was also a success in handling all equipment and chemicals properly with no injuries involved.

The only suspected errors for incorrectly synthesizing the red complex was choosing the correct solvent and overheating the solvent. Instead of running the experiment over three times without properly knowing which solvent to run it in, reassuring the solvent of choice would reduce the chance of error significantly. To reduce error in boiling out the solvent a hot plate that displays the temperature would be more useful than a hot plate that does not display the temperature. To ensure even further that overheating of the solvent does not occur, the usage of a thermometer would reduce overheating significantly. 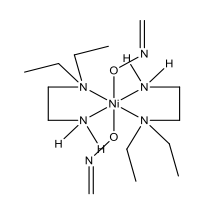 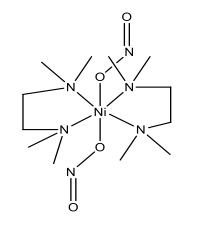 Preparation of solutions for UV-Vis Analysis