Concentration of Nitrate Ions and Chlorine Ions in Wastewater

Concentration of Nitrate Ions and Chlorine Ions in Wastewater

Concentration of Nitrate Ions and Chlorine Ions in Wastewater
By: Jenny Mathe

Procedure Part One:  In order to determine the concentration of chloride ion, titration was used. 25.0 mL of wastewater was added to three Erlenmeyer flask using a 25.0 mL volumetric pipette. The 25.0 mL of wastewater was diluted with 25.0 mL of deionized water that was measured using a graduated cylinder. Three drops of yellow K2CrO4 indicator was added to each of the Erlenmeyer flasks. The burette was set up on a double clamp and was filled with 0.0100 M AgNO3 solution.  A small amount of AgNO3 was drained out of the burette in order to fill the tip and clear air. An initial reading of volume was taken and recorded and the AgNO3 solution was slowly added to the Erlenmeyer flask with the wastewater. While the AgNO3 solution was added, the flask was swirled. The endpoint was reached when the solution in the Erlenmeyer flask turned a cloudy orange color. A final volume reading was taken and recorded and by subtracting the final volume from the initial volume, the total volume was found and recorded. This process was repeated two more times from the point of recording the initial volume.  The solutions were disposed of in a waste bottle and leftover AgNO3 solution was placed in a recycling bottle.

The chloride ion concentration was determined by titration.  Three trials were used to calculate the molarity of the chloride ion in the wastewater. Before and after treatment concentration of chloride ion can be seen in the table below. The first three columns illustrate the volume of AgNO3 used in the titration. From the volume of AgNO3, the moles of AgNO3 used was calculated using dimensional analysis (See below) using the 0.0100 molarity of AgNO3 which can be multiplied by the volume (in liters) of the AgNO3 used. The moles of silver ion shown in the fourth column was calculated (See below) using the mole to mole ratio determined with the balanced ionic equation (Ag+ + NO3– àAgNO3). In the fifth column, the moles of chloride ion was calculated (See below) using the balanced ion equation (Ag+ + Cl– àAgCl) and the mole to mole ratio. In the sixth column, the molarity of chloride ion was determined by dividing the moles determined in the fifth column by .025 L, which is the sample volume in liters.

Before Treatment *All calculations are averaged

After Treatment *All calculations are averaged

Nitrate ion concentration was determined using spectrometry and a calibration curve. Three test tubes were filled with 500 microliters of wastewater and 500 microliters of deionized water. These test tubes were then placed in the spectrometer and their absorbance at 540 nm was recorded. The absorbance values for each of the three test tubes can be seen in the before and after treatment tables below.  The concentration of the nitrate ion in each solution was determined using Beer’s Law and a calibration curve comparing concentration and absorbance determined from the graphing tool on Excel. The graph generated a best fit line according to the data taken from the known concentrations of nitrate as seen in own data below. From the line in the form y=mx+b, Beer’s Law (A=Ɛ/c where / is 1) was applied by replacing y with the absorbance gathered using the spectrometer, m with Ɛ, / remaining one, and c being solved for, along with a correction factor as b (See below).  After c, was calculated using Beer’s law, the concentration was doubled because the original sample of wastewater was diluted by 50%. Also, concentration of the nitrate ion in samples one through 6 was calculated using the equation C1V1=C2 V2 in which the C1 equals the known concentration of pure nitrate standard (1.00×10-3 used in this experiment), V1 equals the volume of nitrate in a test tube, V2 equals the total volume of 1000 microliters in this case, and C2 is being solved for (See Below).

Before Treatment *All calculations are averaged

After Treatment *All Calculations are averaged 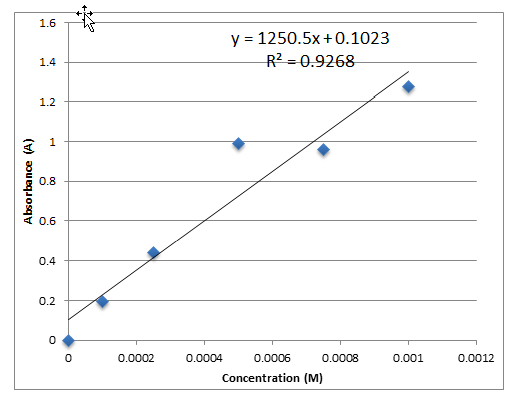 Calibration Curve/ Plot for Own Data 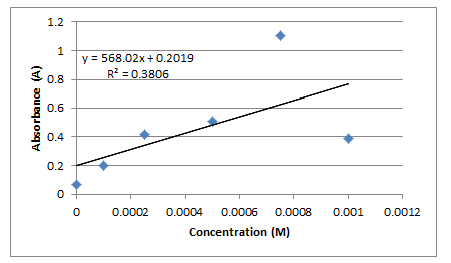 Section-Wide Column Chart of Before and After Treatment Concentration Averages 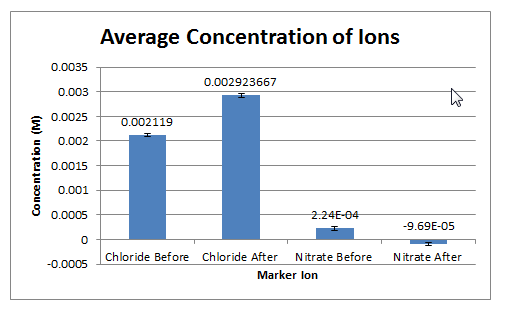