The objective of experiment one is to see if the year a penny is produced in mint, relates to the weight of the penny. Each lab group had a set of 20 pennies, in which we collected the weight and the year of each penny. The information obtained from each lab group will help us create some statistical data. By using different calculations, I will be able to determine if there is a relation between a penny’s weight and year minted. The calculations I will use to do this are: mean, standard deviation, Q-test, and t-test. I predict that pennies that are newly produced will weigh less than pennies produced many years ago.

This value was found on Values of Student’s t Table provided by Dr. Schug. The table was originally found in Quantitative Chemical Analysis, Seventh Edition ©2007 W.H. Freeman and Company.

Q calculated in both cases (high and low) is less than Q critical (table), so we retain both values. 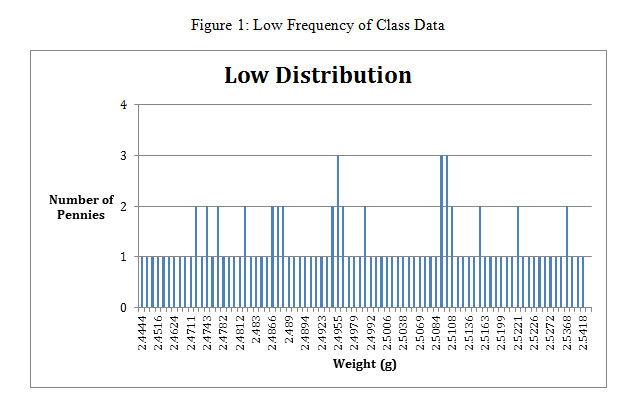 Figure 2: High Frequency of Class Data
Where the x-axis is the range in grams, and the y-axis is the number of pennies. 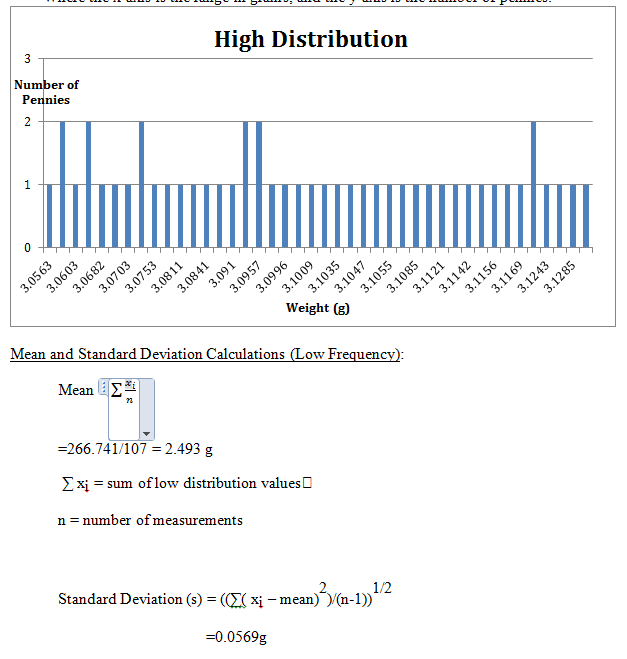 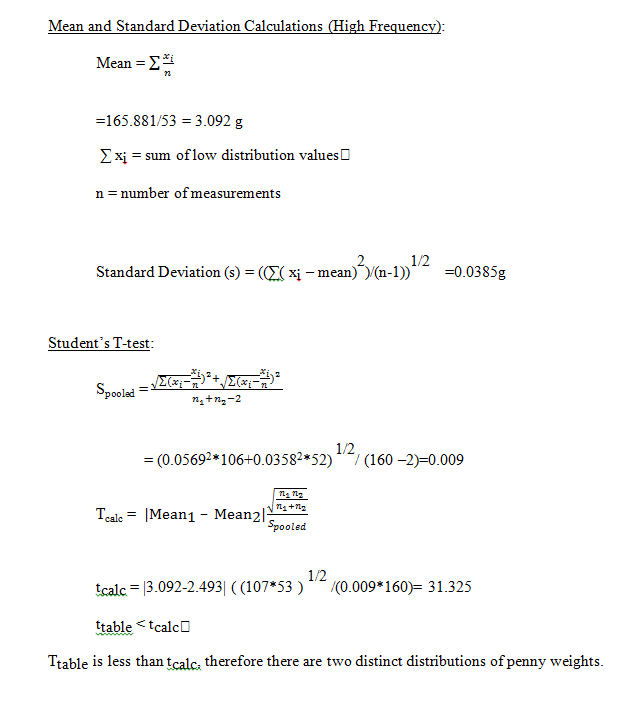 While performing the experiment, it became evident that there was a range of weights that can be expressed on table 1. When we calculated the Q-test, it revealed that the two highest and two lowest values were not outliers. By performing these calculations we can visibly see a difference between the highest and lowest values. After dividing these values by the range, we calculate the critical value. After calculating the critical value, it was determined that no values should be disregarded because the calculated Q-test value was less than the provided critical value.

After reviewing the complied data from the class, it was evident that there were a large majority of the masses were around 3 grams. If you look at the histograms ( Figure 1 and Figure 2), you can see the frequency distribution  for the masses of the pennies.  In order to tell completely analyze the data, more tests and calculation were done.

By calculating the two frequencies, it became evident that a T-test needed to be done to verify the data. First, the pooled standard deviation (S pool) is calculated. This was needed to plug into the T calc equation. After calculating a T-value, it was compared that value to the t-table value. Because T table was less than T calc at a 99% confidence, it can be assumed that there are two distinct distributions.

It can be concluded that there is a relation between the pennies masses and the year minted. I predicted that pennies that are more newly produced would weigh less than pennies produced many years ago. This seemed to hold true while analyzing our data.

I was able to conclude that the majority of that data is closer to the mean in the class data than in comparison to the individual datum. This is evident because you can slightly tell there is a Gaussian distribution in figures 1 and 2. This just shows that the measurements were replicated enough times to account for a random error, if any. When I compared the t-test datum more closely, I was able to conclude that there are two distinct distributions. The confidence interval was 99%.