Slime molds are one of the most complex and distinct protists that were once considered to be fungi because of their sporophytic reproduction (Wimpee et al. 2013). Slime molds are considered to be a bridging species between the Metazoa and Metaphyta (Sussman 1956). Slime molds are a phagotrophic species, meaning they consume the nutrients they need to grow by engulfing it. Bacteria is a primary food source for most slime molds, and more specifically the plasmodial slime mold which is also the slime mold used in this experiment. Plasmodial slime molds are known for living in dark and damp conditions (Wimpee et al. 2013). Slime molds eat and move in a single celled form and as food becomes scarce, slime molds morph into their reproductive selves (Sussman 1966). Slime molds create a sexual sporangium that sprouts up from the single celled body to then disperse meiotic spores in hope to reproduce (Wimpee et al. 2013). Even though slime molds are brainless creatures, studies have shown that they can sense environmental changes and move in the most effective way to retrieve food, making slime molds a very interesting single celled organism (Bonner 1947). The purpose to this experiment is to show the success this organism has in effectively finding food under the proper growing conditions. I hypothesized that a slime mold given more food will grow larger in size then one with less food. I predicted that a slime mold given six times the amount of food will expand its growth farther than a control group with a lesser amount of food. My control in this experiment is an agar plate with 10 (0.2g) oat flakes. The independent variable in this experiment is the amount of oats, while the dependent variable is the growth of the slime mold, and the standard variable is the growing conditions.

For the experiment I got two agar plates, and put the proper amount of oats on each plate. The control had 0.2 grams of oats and the experimental plate received 1.2 grams of oats which is six times the amount as the control plate. I then added a small square of plasmodial slime mold otherwise known as a Physarum polycephalum colony and taped a small graph to the top of the agar plates to record the slime mold growth. They were then kept in a paper bag in the dark at room temperature for a week.

(total area covered at the end of experiment)/(total days recorded) 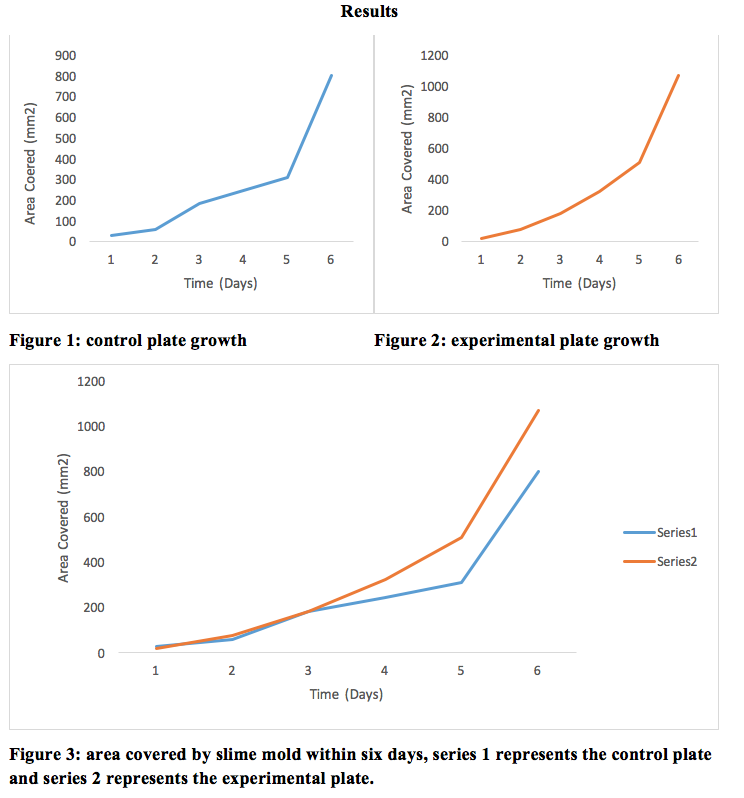 The results of this experiment supported my hypothesis. Both plates showed consistent growth within the experimental time period and the experimental plate with more oats grew at a 2.2% larger growth rate. The slime mold followed my prediction of covering more square growth if it was surrounded by more oats. Other studies also support the idea that slime molds grow more productively in better nutritional environments (Bonner 1947). The slime mold follows the closest route to food and when part of its slime body finds some, more of the cellular structure follows creating a really sufficient path to a nutrition source (Sussman 1966). The experimental plate with more oats allowed more growth because the slime mold could find food faster, the oats were so compact on the agar plate that the slime mold consistently found a nutrition source and continued growing to find food. Slime molds are important for the purpose of decomposition of organic materials in soil (Sussman 1956). With the understanding of slime molds life cycle and process in survival we can further incorporate the understanding of protist importance in the human body in relation to the medical world, as well as environmental benefits of slime mold/protist decomposition for soil nutrition (Sussman 1956).

Bonner, J. T. 1947. Evidence For The Formation of Cell Aggregates by Chemotaxis in the  Development of the Slime Mold Dictyostelim Discoideum. Journal of Experimental Zoology. 106:1-26