Preparation and equilibration of isomeric 2,3-Dimethylbutenes

Preparation and equilibration of isomeric 2,3-Dimethylbutenes

Preparation and equilibration of isomeric 2,3-Dimethylbutenes
By: Shannon Davis

The first reaction that took place is a Grignard reaction where an alcohol was produced. The percent yield for this reaction was 62.5%. The ether and other impurities were taken out and the alcohol left was 82.89% pure with only .16% of ether. After the elimination reaction the product was mixture of 2,3-dimethylbutenes. The reaction had a percent yield of 93.04%.  1.61 g of “1-ene” and 5.38 g of “2-ene” was produced in the elimination reaction.

The goal of this lab is to produce 2,3 dimethylbutenes. The process starts with a Grignard reaction to create alcohol. The alcohol is in an ether solution. The alcohol/ether solution needs to be separated from the aqueous and other impurities. A separatory funnel is used to do this. Then distillation followed by fractional distillation is used to separate the alcohol from the ether.  The alcohol is then converted into the corresponding 2,3 dimethylbutenes.

The next part of the reaction involves the Grignard reagent reacting with a carbonyl. In this case the carbonyl compound is methyl isopropyl ketone. This reacts to form (CH3)2C(OMgI)CH(CH3)2.

This reaction adds a hydrogen to the previous compound, turning it into an alcohol. This is done by adding the HCl slowly to the solution through the dropping funnel. The solution is in an ice bath to keep it cold. Most of the solid is gone, only some flakes are left.

The separatory funnel is used to separate liquids with different densities. In this lab the ether is needed to be separated from the rest of the solution.

First the aqueous layer is separated from the ether. This is done 3 times to insure best results.

Second sodium bicarbonate is added to the ether to remove any remaining HCl. The separatory funnel is shaken and allowed to separate and then drained to separate the NaHCO3 from the ether. This is done 3 times to ensure best results.

Third sodium thiosulfate is added to the separatory funnel with the ether. This gets rid of the I2 that is causing the solution to be yellow. This is done 4 times to make sure all the I2 is gone.

To get rid of the excess ether a distillation system is used. The solution is heated up in a 250 ml round bottom flask heated with a heating mantle. Since not all of the solution will fit in the 250ml flask a dropping funnel will needed to be used to slowly add the remaining the solution slowly. As the solution is heated the vapors will rise and condense in the west condenser and drip into a receiving flask. The vapor that is collected is mostly ether because it has the lowest boiling point. This is done until the thermometer temperature drops indicating most of the ether has been removed.

The process for this distillation is similar to the distillation to remove ether. The differences are that there is a longer path for the gas to travel up and the whole system is insulated to keep the heat in. 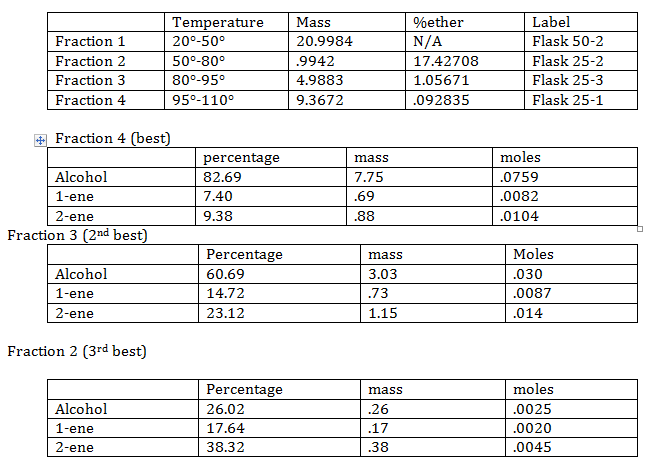 The mass of the alcohol used in this stage is 7.75 g (best fraction).

The mass of alcohol after reaction is .54g

Percentage of alcohol not converted is 6.96%

The Grignard reaction has a percent yield of 62.5%. This is due to many factors. First of all not all the fractions were measured when doing the calculation. Second, transferring product always results in a loss of product. Third, during the separatory funnel work product was lost when the solution was either not fully mixed or not separated properly. Also the solution is transferred many times so product is lost.

The elimination reaction has percent yield of 93.04%. The loss of product may have occurred from the heat in of the solution. The hot plate that was used to heat the mineral oil bath would not adjust. This meant that it was either all on or all off, making the temperature very hard to control. The bath would get to hot and by the time it cooled off the solution would be cool and have to start over again. This was finally fixed by changing out the hot plate. The amount of catalyst used could also be a reason some product was lost.