In 2001 the Nobel Prize in Chemistry was awarded to K.Barry Sharpless, and shared with William S.Knowles, and Ryōji Noyori for their work on asymmetric oxidations.

Epoxides are highly useful intermediates in organic synthesis, since these undergo ring opening on attack by a wide variety of nucleophiles. The regioselectivity of the ring –opening reaction is controlled by  the nucleophile, the size and electronic nature of the atoms or groups on the carbon atoms of the epoxy ring and also on reaction condition e.g., acid catalysis. The epoxide reacts after protonation of epoxy oxygen, which undergoes ring opening by a halide– (SN2 pathway) at the less hindered position (away from the cyclobutane ring). The isomeric epoxide (endo-epoxide) on the other hand seems to prefer a role through protonated form, which involves an axial- axial arrangement of the C-Br and C-O bonds to be formed as a result.

Venustratriol is a marine derived natural product that is found in red alga Laurancia venusta it is derived in vivo from sqalene, made as triterpene, and has antiviral and anti-inflammatory properties.

Untenone is isolated from a marine sponge, and exibits inhibitory activity against mammalian DNA polymerases, these enzyme are useful for DNA replication, repair, and cell divisions . Total synthesis shown below:

1.Epoxides can be easily converted into diols, aminoalcohols or ethers, so formation of chiral epoxides is a very important step in the synthesis of natural products.

2.Sharpless epoxidation reacts with many primary and secondary allylic alcohols.

3.The products of the Sharpless epoxidation frequently have enantiomeric excesses above 90%.

4.The products of are predictable using the Sharpless Epoxidation model.

5. The reactants for the Sharpless epoxidation are commercially available and pretty cheap. 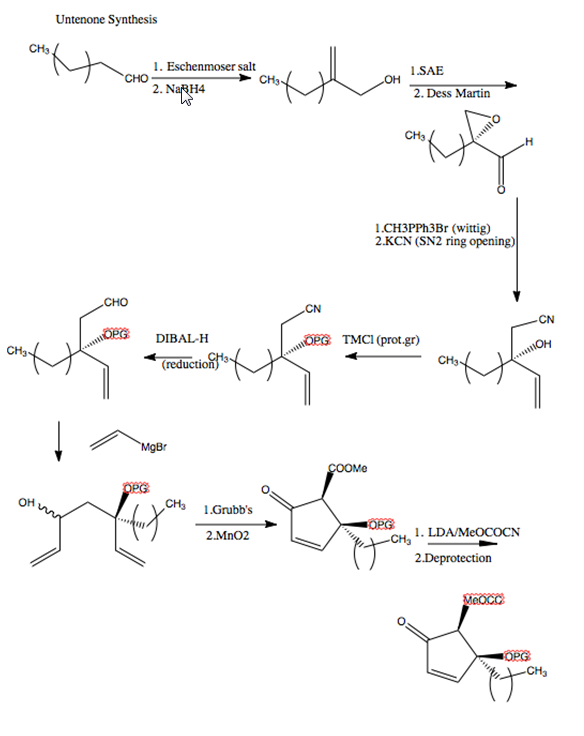