These three stereoisomers, the meso compound or (1R, 2S)-1,2-diphenylethane-1,2-diol, or a racemic mixture of (+/-)-1,2-diphenylethane-1,2-diol, provide nearly identical 1H NMRs, so the stereochemistry of these products cannot be fully determined by this method. In order to accurately determine the stereochemistry of the product or products formed, a derivative of the hydrobenzoin, with a distinct NMR must be made. In this case, the formation of an acetal of the hydrobenzoin product (Figure 4) will aid in determining the stereochemistry of the product. The two Newman projections in (Figures 5 and 6) depict the stereochemical outcomes with respect to the ethane backbone within the molecule. By forming this acetal derivative of the hydrobenzoin product, the stereochemistry can be determined using a simple 1H NMR. If the meso hydrobenzoin product was formed, the resulting acetal derivative would show two distinct methyl groups in its 1H NMR spectrum. The methyl group that resides on the same side of the molecule as the two phenyl groups would be deshielded, resulting in a higher chemical shift for those protons, while the other methyl group would not be deshielded and would have a lower chemical shift. If the (+/-) hydrobenzoin products were formed, the resulting acetal derivative would show no distinction between the two methyl groups. They would both exhibit equal chemical shifts. This simple spectroscopy technique can allow scientists to further investigate the mechanistic principles that govern this reaction. In general, chemists must use similar chemical reactions in order to better understand the mechanisms involved in various processes. Today, cutting edge research is being done to better explore the mechanistic pathways of numerous chemical reactions. 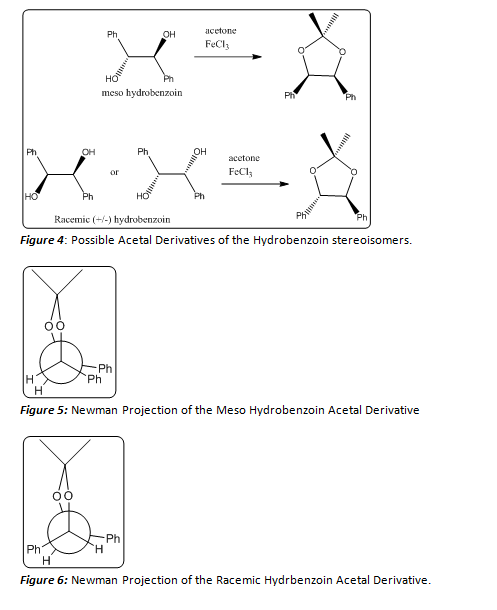 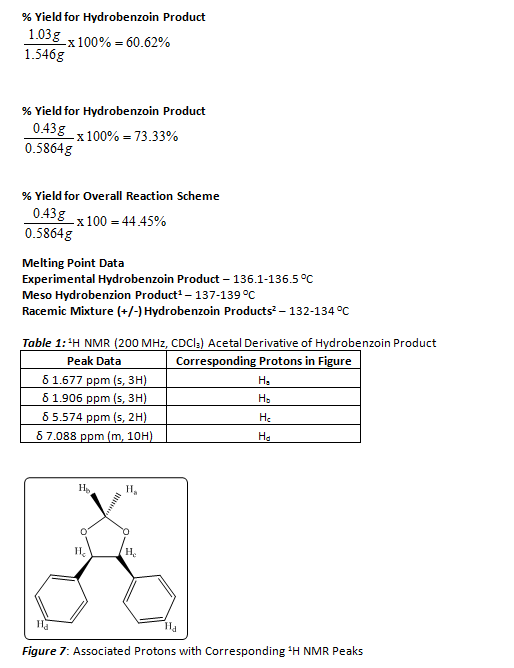 Once the hydrobenzoin product was collected and dried, a percent yield and melting point range was obtained. The percent yield was found to be 60.62%, and the melting point range was found to be 136.1 -136.5 OC. By finding this melting point it could be inferred that the meso hydrobenzoin product had been formed, but a 1H NMR of the product could provide more evidence of the formation of this specific product. Since the 1H NMR of all of the stereoisomers of hydrobenzoin are nearly indentical, an acetal derivative of the product was formed (Figure 4).

The acetal derivative of the hydrobenzoin product formed an oil, and a percent yield and 1H NMR of this product was able to be acquired. The percent yield was found to be 73.33%. And the 1H NMR (200 MHz, CDCl3), Table 1, was utilized to characterize this acetal derivative of the hydrobenzoin. There were a few solvent peaks that showed up on the NMR spectrum, but could be ruled out as constituents of the petroleum ether used to hot filter the product in the last step of the lab procedure. There are four main peaks that correspond to the product formed. (Figure 7) The peaks at δ 1.677 and 1.906 ppm correspond to the two methyl groups attached to the acetal. The singlet at δ 5.574 ppm corresponded to the protons located on the ethane backbone of the product, and the multiplet at δ 7.088 ppm corresponded to the aromatic protons of the two phenyl rings. As noted before, depending on the stereoisomer of the hydrobenzoin, the acetal derivative could form two distinct stereoisomers (Figure 4). In order to determine which stereoisomer of the hydrobenzoin was formed, the Newman projections of both acetal derivatives must be compared to the 1H NMR. If the product in Figure 6 had been formed the methyl group peaks in the 1H NMR would have been indistinguishable, and would have resulted in a singlet that integrated for six protons. As seen in Table 1, there is no singlet that corresponds to six protons. Instead, one of the methyl groups has a higher chemical shift than the other. This can be explained by examining Figure 5. By forming the acetal derivative with the two phenyl rings on the same side, the methyl group that resides on that side of the molecule is deshielded, and therefore has a higher chemical shift than the other methyl group which does not encounter the deshielding effects of the phenyl rings. Since the meso hydrobenzoin product was the only compound that could lead to the formation of this acetal derivative, the reduction of the benzyl to hydrobenzoin using sodium borohydride must be a stereospecific reaction mechanism. Below a mechanism that is consistent with this conclusion is shown (Figure 8).

After forming the meso hydrobenzoin product, the acetal derivative was formed. The reaction mechanism is shown in Figure 9. In this part of the experiment, all glassware needed to be dry in order to prevent the formation of either a hydrate, or the reversal of the formation of the acetal. Iron trichloride acts as a lewis acid in this mechanism allowing for the nucleophilic addition of the diol. If we had used an acid catalyst such as hydrochloric, which is an aqueous solution, water would have been introduced to the reaction mixture. And acid catalyzed hydrolysis of the acetal product is possible, as stated before. Finally, the reaction mixture was diluted with 10% potassium bicarbonate. This step is used to neutralize any acid in solution, because the acetal that is formed is stable to base hydrolysis. 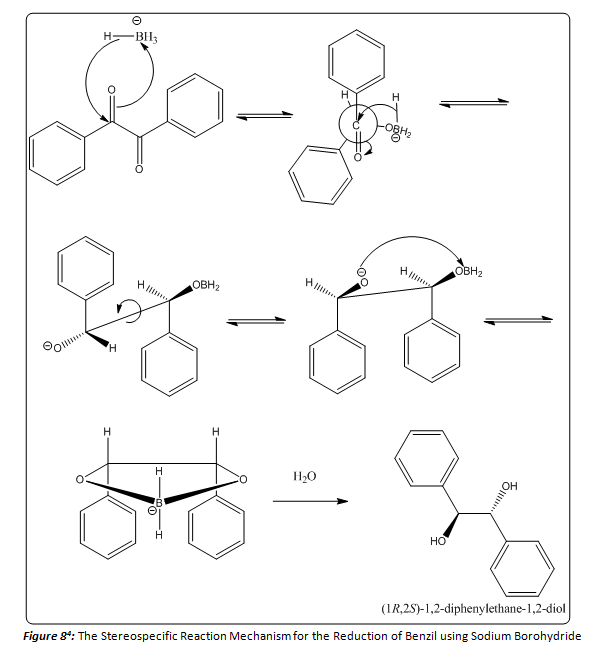 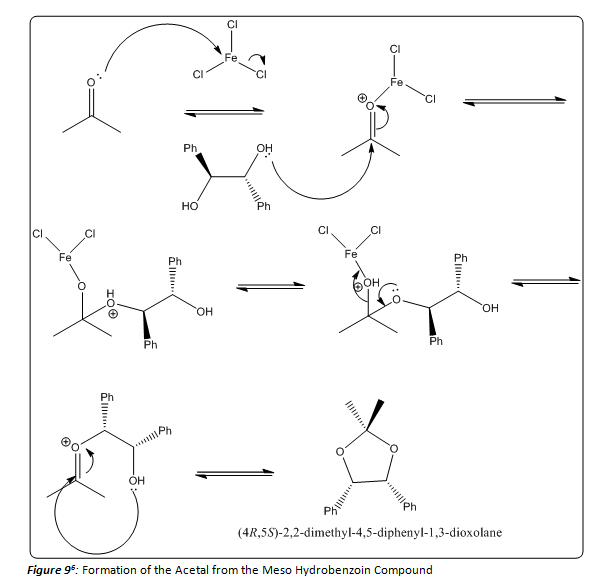 Overall, this experiment was a success. In order to raise the efficiency of the first reaction, the time over which the sodium borohydride was added and the time over which the reaction mixture was allowed to stir could be increased in order to ensure that more of the sodium borohydride had reacted with the benzil. Since the stereochemistry of the hydrobenzoin product could not be inferred from its 1H NMR, an acetal derivative of the product was made. This formed an oil which was able to be run in the NMR, and a useful 1H NMR spectrum was acquired. The NMR spectrum led to the conclusion that the (4S-5R)-2,2-dimethyl-4,5-diphenyl-1,3-dioxolane, acetal product had been formed. This conclusion provided evidence that the meso hydrobenzoin product had been formed exclusively in the first step of the experiment. The proton NMR along with the melting point range acquired, 136.1– 136.5 OC          (Lit.1 137 – 139 OC), for the hydrobenzoin compound helped to lead to this conclusion. The overall reaction was relatively simple and resulted in the formation of a stereoisomeric product that could be studied using NMR.

Starting materials were obtained from the instructor and used without further purification. 1H NMR spectrum obtained on a 200 mHz NMR in CDCl3.

Prior to beginning the experiment, all glassware was placed in oven to ensure they were dry before use. Then, the collected hydrobenzoin product (0.5 g, 2.33 mmol) and ferric chloride (150 mg, 0.92 mmol) were added with a stirbar to a 25 mL roundbottom flask. Then, anhydrous acetone (15 mL, 0.204 mol) was added to the reaction mixture and heated to boiling under reflux for twenty minutes. Then, the solution was cooled and poured into a separatory funnel containing 5 mL of 10% aqueous potassium carbonate. This was then swirled gently before adding 25 mL of water. The crude product was extracted from the aqueous mixture with 2 X 10 mL portions of dichloromethane. The collected organic extracts were then combined and washed with 10 mL of water. The organic layer was then dried with sodium sulfate. Them the dichloromethane was decanted from the drying agent into a small round bottom flask. The solvent was then removed to leave an oily residue. This crude oily residue was then dissolved in 10 mL of boiling petroleum ether (30-60 OC) and quickly hot filtered through a Hirsch funnel into a small sidearm flask to remove any insoluble unreacted diol. Air was continuously pulled through the sidearm flask until the petroleum ether evaporated and an oil was left behind. The sidearm flask was weighed with product, then a 1H NMR was collected. Finally the sidearm flask was cleaned and dried and weighed. This reaction resulted in the formation of 0.43 g product. 1H NMR (200MHz, CDCl3) δ 1.677 ppm (s, 3H), 1.906 ppm (s, 3H), 5.574 ppm (s, 2H), 7.088 ppm (m, 10 H).