Stereochemistry of Bromine Addition to an Alkene

Stereochemistry of Bromine Addition to an Alkene

Objective: To be able to conduct a reflux reaction, and practice improving recrystallization and mp determination, by the bromination of trans-cinnamic acid to form 2,3-dibromo-3-phenylpropanoic acid, and connect syn and anti addition concepts and stereochemical consequences (erythro & threo) from the addition mechanism.

% Recovery from Recrystallization: 160% (probably due to not being dried enough) 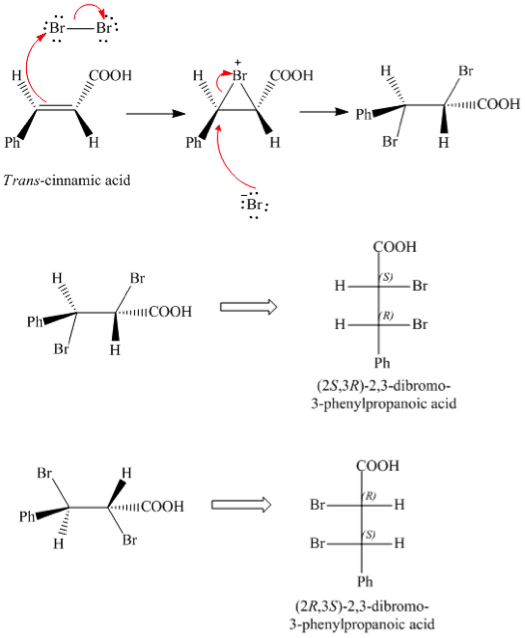 This experiment involved the addition of trans-cinnamic acid to bromine for the production of 2,3-dibromo-3-phenylpropanoic acids. This process depicted an electrophilic addition of a halogen to an asymmetrically substituted alkene. A result of this process was the presence of a stereospecific Bromonium ion formed by the mechanism of the reaction.

The mixing of trans-cinnamic acid with 10% bromine in dichloromethane over a low heat enables to increase the speed of the reaction. The mixture was later cooled to room temperature and then placed on an ice bath. As the solution was cooled, small crystals rapidly formed at the bottom of the round bottom flask where impurities were present. After cooling, this mixture was separated using vacuum filtration, which allowed separating the 2,3-dibromo-3-phenylpropanoic acid. The acid was rinsed 3 times with cold dichloromethane. It allowed the removal of any leftover bromine from the product and is also incapable of dissolving the product.

The final product was weighed in to be 0.1549 g, while initial crude weight was 0.095 therefore yielding 160% recovery from recrystallization, 73.8% pure yield %, and 45% crude yield %. The theoretical melting point range was 203.4-205.6o C, 202.7-205.3 o C therefore telling that the product formed was erythro-2,3-dibromo-3-phenylpropanoic acid since the melting point values recovered was close to 202-204*C value. The reason for such a high yield was due to substance not being fully dried when weighing most likely.

1.) Bromination is needed to add bromine atoms to the double bond by way of anti addition through a Bromonium ion intermediate. In order to form product Bromine MUST be present so if all the bromine is used and solution turns clear more bromine must be added to keep the reaction shifted to the right in order to favor the production of 2,3-dibromo-3-phenylpropanoic acid.

2.) The purpose of the reflux is to allow reaction to happen at a higher temperature and not allow a high loss of solvent or product. If reflux wasn’t used then the solvent would evaporate into atmosphere, and product would be lost/burnt. Reflux is the process of boiling reactants while continually cooling the vapor returning it back to the flask as a liquid. It is used to heat a mixture for extended periods and at certain temperatures.

3.) Diastereomers are not mirror images of each other and non-superimposable. Diastereomers can have different physical properties and reactivity. Thus, one can measure different melting points of the products, and boiling points and different densities.