The purpose of this lab is as follows: 1) to learn about coordination compounds through the synthesis and analysis of a potassium ferrioxalate hydrate salt and 2) to use the techniques developed in previous labs to determine the empirical formula of the ferrioxalate salt. The ferrioxalate salt has the empirical formula Kx[Fey(C2O4)z]•nH2O. The values of x, y, z, and n are ascertained through determining the percentages of K, Fe, C­2O42-, and H2O; converting these percentages to grams and then grams to moles; and using mole ratios to attain the values for each variable.

The following is the balanced chemical reaction equation for the formation of the potassium ferrioxalate salt:

In the potassium ferrioxalate hydrate salt, the central atom is Iron, Fe, which is in the 3+ oxidation state. The Fe3+ ion, also called the ferric ion, can have 6 ligands, which act as Lewis bases in coordinate covalent bonds. Coordinate covalent bonds, sometimes referred to as dative bonds, is different in the sense that one atom donates both electrons to form a pair of electrons which is shared between two atoms while the other atom doesn’t donate any electrons to this bond, as opposed to an ordinary covalent bond where each atom donates a valence electron to form a pair of electrons which is shared between the two atoms. All dative bonds result from Lewis acid/base reactions. Some ligands, called chelates, have more than one pair of electrons which they can donate to the central atom. Compound which contain dative bonds are called coordination compounds. The coordination number of a coordination compound is the number of sites that ligands are attached to the metal. The ferric ion can have 6 ligands; therefore, its coordination number is 6, and thus has an octahedral geometry.

Once the complex salt potassium ferrioxalate hydrate is synthesized and filtered, the percentages of K, Fe, C2O42-, and H2O can be calculated. The percentage of H2O is calculated by taking a specific amount of the solid and heating it to evaporate the water, calculating the mass of H2O loss, and calculating the %H2O by mass:

The percentage of C2O42- is calculated through redox titration using potassium permanganate, KMnO4. First, the concentration has to be standardized using sodium oxalate, Na2C2O4. The molarity of permanganate solution is used, along with a mole ratio from the balanced net ionic equation of the reaction of potassium permanganate with sodium oxalate to calculate the grams of oxalate, which can then be used to calculate the %C2O42-. The balanced net ionic reaction is as follows:

The percentage of Fe is calculated through colorimetric analysis. This involves serial dilutions of an Fe stock solution at different volumes, using a spectrometer to determine the molar absorptivity of the stock solution and to determine the absorptivity of a solution of ferrioxalate salt, using these to calculate the amount of moles and grams of Fe, and using this value to calculate the %Fe. The following equations are essential for this part:

where A is the absorbance, which the number received from the spectrometer readings, and %T is the percent transmittance;

where A is the absorbance, Ԑ is the molar absorptivity ( in units of M-1cm-1), l is the path length (which is equal to 1cm), and C is the concentration (in moles per liter, or M);

The theoretical yield is calculated by using stoichiometric ratios to determine the amount of ferrioxalate that would theoretically be produced from the exact amounts of iron (III) chloride hexahydrate and potassium oxalate that were measured from the beginning of the experiment. The percent yield is then determined by the following equation:

Table 1. The measurements and calculations necessary to calculate the % H2O

Table 2. The measurements and calculations necessary to calculate the molarity of the KMnO4 standard

Table 3. The measurements and calculations necessary to calculate % C2O42-

Table 5. Shows the spectrometer readings and the % transmittance for each solution

Graph 1. Shows the Absorbance vs. Concentration and a line of best fit for the data 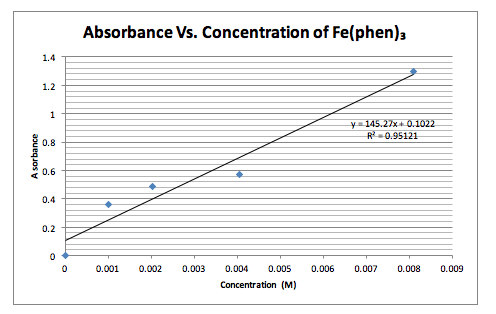 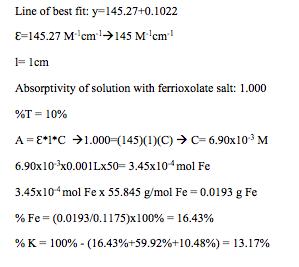 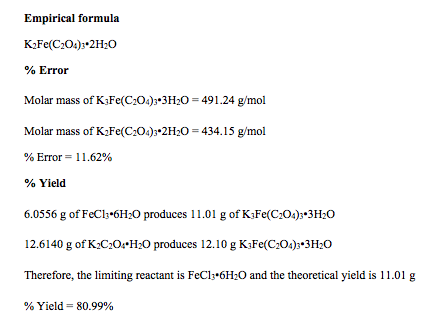 The actual empirical formula of potassium ferrioxalate is K3Fe(C2O4)3•3H2O, which has a molar mass of 491.24 g/mol. The IUPAC name for this salt is potassium iron(III) oxalate trihydrate. In this experiment, an empirical formula of K2Fe(C2O4)3•2H2O, which has a molar mass of 434.15 g/mol, was ascertained. Therefore, there was a percent error of 11.62%. With 6.0556 g of FeCl3•6H2O and 12.6140 g of K2C2O4•H2O, since FeCl3•6H2O is the limiting reactant in this experiment, there is a theoretical yield of 11.01 g, which means that there was an 80.99% yield in this experiment. This is a really high percent yield. Possible errors include some of the crystal being left on whatever surface it left in its many transfers, some of the crystal being misplaced from the Büchner funnel when being transferred to the watch glass, and too much light being exposed to the crystals, which causes decomposition of this particular compound.

Figure 1 shows the structure of the potassium ferrioxalate. The oxygens, which are single bonded to carbon, are the ones that bond to the iron. The overall charge on complex ferrioxalate ion is 3- because Fe is 3+ and there three oxalate ions each with a charge of 2-, which this result in a total charge of 6- for the oxalate ion. The 3- charge on the complex ion is compensated by three 1+ potassium ions. The potassium ions are on the outside of the complex ion. 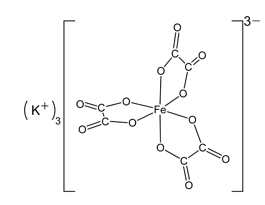