Synthesis and Characterization of MnIII(Salpn)(AcAc) with ligation

Synthesis and Characterization of MnIII(Salpn)(AcAc) with ligation

MnIII complexes are used extensively in biochemistry, especially when describing the evolution of oxygen in photosynthetic plant cells,1 Manganese catalysis,2 and ribonucleotide reductase.3 The values of transforming a metal halide into a soluble metal ligand complex in organic solvents is extremely beneficiary to such fields of research. The specific metal ligand complex produced entails Manganese3+, a tetradentate ligand N,N’-bis(salicylidene)-1,3-diaminopropane, (Salpn), as well as the bidentate acetyl-acetonate, (AcAc).

Herein we report the synthesis of the H2Salpn ligand along with the complexed Mn(Salpn)(AcAc). Characterization of both compounds and starting materials are explored, considering infrared spectroscopy, UV-vis spectroscopy, and their magnetic moments in order to further understand their chemical and physical properties.

All reactions were carried out under aerobic conditions and standard pressure. The materials and instrumentation were all provided by the Department of Chemistry and Biochemistry at the University of California Santa Barbara.

The production of the ligand H2Salpn, was carried out in aerobic conditions by the reaction of salicyl aldehyde with 1,3-diaminopropane in according to scheme 1. The yellow solution turned slightly orange and began to cloud towards the end of the fifteen-minute stirring period.

With a 69.2% yield, The H2Salpn crystals were collected via vacuum filtration and washed with cold methanol. The UV-vis and IR spectra were taken signaling the production of the desired H2Salpn ligand. Figure 1 depicts the Infrared Spectrum of the ligand. Key stretches are present indicating the production of the desired H2Salpn. These stretches include the C=N (1581(s, vC=N)) and C=C (1636(s, vC=C)).4 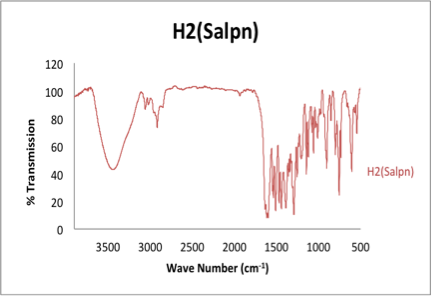 Following the production of the H2Salpn ligand, MnIII(AcAc)3 and the ligand were placed in a round bottom flask with a molar ratio of 1-1.3 respectively. The reaction proceeded in 50mL of methanol and 65 oC to produce the desired MnIII(Salpn)(AcAc) according to scheme 2.

The IR of the starting material MnIII(AcAc)3 is shown in figure 2. The spectrum depicts an –OH stretch due to not being dried. The –OH stretch is most likely due to its constant contact with atmospheric water. 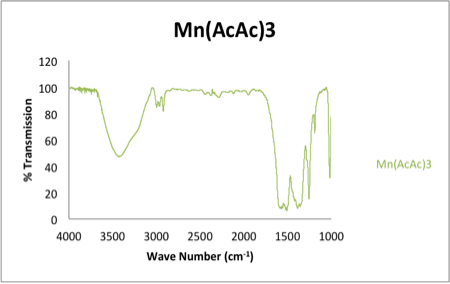 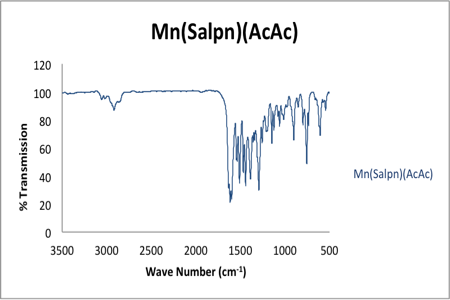 The UV-vis spectroscopy was taken for both the H2Salpn and the MnIII(Salpn)(AcAc) giving us λmax values of 315 nm and 276 nm respectively. The maximum absorbance which occurred for these products resulted in a molar absorptivity of ε = 7487 M-1cm-1 for H2Salpn, which was previously recorded to be ~7700 M-1cm-1.5 Mn(Salpn)(AcAc) produced ε = 25,231 M-1cm-1. Previously conducted experiments resulted in a molar absorptivity of ~24,200 M-1cm-1.6 Figure 4 displays the UV-vis spectra for both the H2Salpn and Mn(Salpn)(AcAc) complex. Absorbance values give similar extinction coefficients along with λmax found in previous experiments.2 3 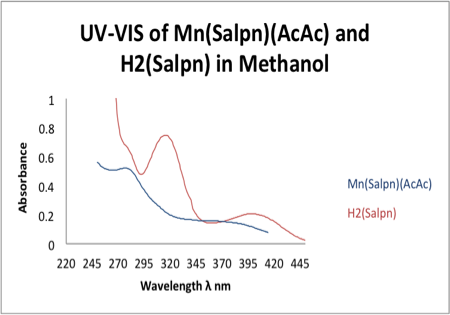 Figure 4. UV-vis spectroscopy of ligand and the ligated Mn complex. Parallels previously acquired data for such ligand and complex.2 3

Characterization of both ligand and complex were also subject to their magnetic susceptibility. Using a guoy balance, the determination of whether the Mn(Salpn)(AcAc) behaved as a high or low magnetic spin molecule, was predicted by its magnetic susceptibility. The findings report that MnIII complex exhibited the high spin state indicating that the energy gap between successive orbitals was low enough for an electron to occupy; resulting in a high spin atom with 4 unpaired electrons.3

Synthesis of Mn(Salpn)(AcAc) through ligation with H2Salpn was successful producing a useful ligated transition metal. Through the use of spectroscopic and magnetic properties, the resulting products were tested to verify its production. The use of Mn(Salpn)(AcAc) in biological systems is extremely useful when describing redox reactions, catalysis, and ribonucelotide reductase.7 Both synthesis and characterization were useful in both determining the production of desired materials as well as providing an in depth understanding of MnIII complexes and how ligands work.