Synthesis and Kinetics Studies of Wilkinson’s Catalyst
By:  Nicole Alexander

Wilkinson’s catalyst is used in the hydrogenation of cyclohexene.  Wilkinson’s catalyst was synthesized with a percent yield of 84.8%.  Next this compound was characterized and the kinetics was measured.  The original catalyst and the synthesized hydrido, the yield of which was 73.06%, were characterized via IR spectroscopy and the H2 peaks were clearly distinct at around 2000 cm-1.  A catalytic hydrogenation was performed resulting in 95.195% cyclohexane product.  Lastly the rate of this hydrogenation was measured based on varying concentrations of triphenylphosphine and cyclohexene. The rate determining step was calculated to be 0.02 ±0.0342 s-1.

Hydrogenation reactions are a very important reaction in chemistry research.  An important catalyst involved in these reactions is the Wilkinson’s catalyst, RhCl(PPh3)3, which was first introduced in 1966 [1].  It was studied that Rhodium complexes with strong π-acceptor ligands, such as triphenylphosphine, are the most effective for hydrogenation at normal temperatures and pressures of alkynes and alkenes [2]. This catalyst is also effective because of its selectivity for double and triple bonds between two carbon atoms over single bonds [3].  In this experiment the alkene, cyclohexene was hydrogenated into cyclohexane.

The actual reaction of Wilkinson’s catalyst is widely studied.  However it is also important to study the kinetic pathway mechanism of the catalyst.  The complex reaction system can be obtained by observation of each step.  Studies have shown the most likely reaction pathway called the “hydride” route [4].  The first step in this path is the oxidative addition of H2 to activate the Wilkinson’s catalyst.  The next step, shown in figure 1, was proposed based on previous studies of the Wilkinson’s catalyst reaction [5].  The final step, shown in figure 1, is the reductive elimination of cyclohexane and the cycle is completed. 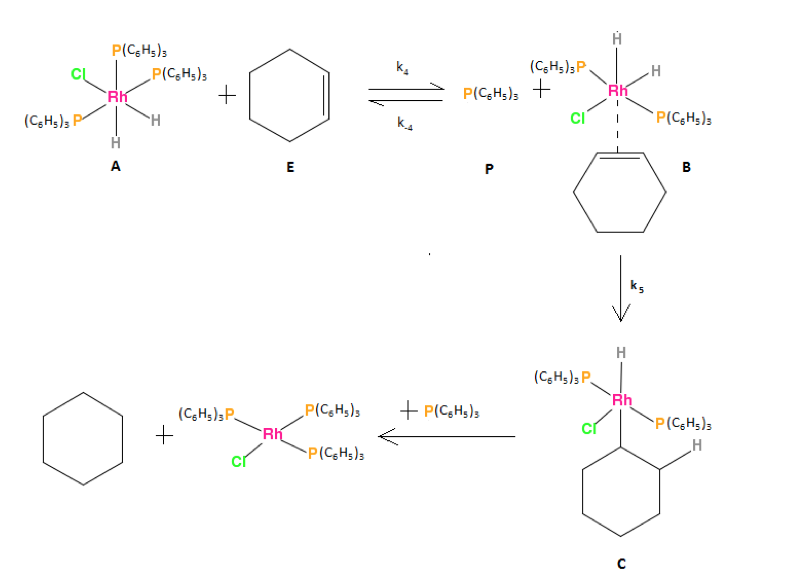 20 mL of absolute ethanol was placed in a 25 ml round bottom flask, equipped with a reflux condenser and magnetic stir bar.  The ethanol was heated until just under the boiling point.  600.3 mg of PPh3 was added into the hot ethanol and stirred until it dissolved completely.  101.2 mg of RhCl33H2O was added next to the solution.  The solution was left to reflux for about 20 minutes.  The dark red crystals were filtered through a Hirsch funnel.  The crystals were washed with three 1 mL portions of hot ethanol and three 1 mL portions of diethyl ether.  The resulting Wilkinson’s catalyst had a yield of 84.8%.

All solutions were set up in a water bath at a constant temperature of 25 ºC.  25 mL of toluene and 20 mL of cyclohexene were put in two separate 100 mL round bottom flask, with a rubber septum and bubbled with argon for at least 15 minutes.  20.6 mg of RhCl(PPh3)3 was placed in a 100 mL round bottom flask equipped with a stir bar and rubber septum and purged with hydrogen gas for several minutes.  10 mL of argon saturated toluene was added to the Wilkinson’s catalyst flask.  The solution was stirred and purged with hydrogen gas until all the Wilkinson’s catalyst dissolved.  11.4 mg PPh3 was added to a capped cuvette and purged with argon for several minutes.  0.5 mL of argon saturated toluene and 0.5 mL of the Wilkinson’s catalyst solution was added to the cuvette with a syringe.  This cuvette was bubbled with argon for 3 minutes.  1 mL of deoxygenated cyclohexene was added to the cuvette.  The solution in the cuvette was mixed well and placed in the spectrometer.  The absorbance was monitored for about 20 minutes.

104.1 mg of RhCl(PPh3)3 was added to a 3 mL conical vial with a septum cap.  1 mL of deoxygenated cyclohexene was added to the conical vial.  Hydrogen gas was bubbled through this solution until all but about 0.2 mL was evaporated.  2 mL of deoxygenated diethyl ether was added drop wise into the vial. The flask was cooled in an ice-bath and the crystals were filtered using a Hirsch funnel.  The percent yield was 73.06% and the IRs of the reactant and product were measured with a Jasco FT/IR-4100 Fourier Transform infrared spectrometer.

Table 1: Data of the synthesis of RhCl(PPh3)3

The Wilkinson’s catalyst created in the first step of the experiment needed to be activated by saturating it with hydrogen gas to create the hydrido complex, demonstrated by equation 2.

Figure 2: The IR spectroscopy readout of the reactant, RhCl(PPh3)3 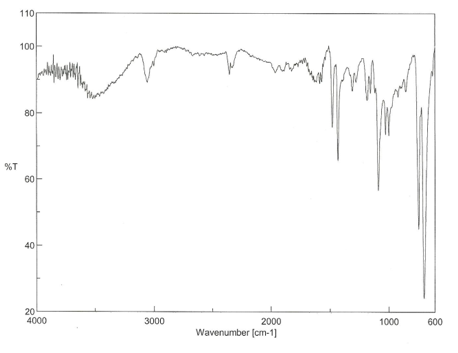 Figure 3: The IR spectroscopy readout of the product, RhCl(PPh3)3H2 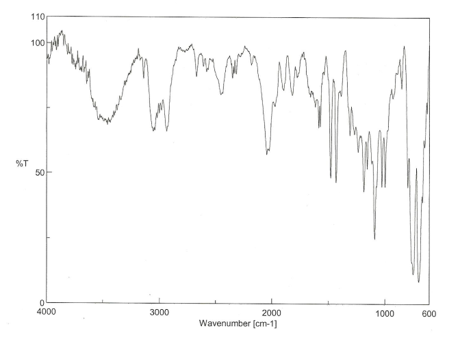 The product of this reaction was in fact the hydrido Wilkinson’s catalyst because the Rh-H stretch can be seen at around 2000 cm-1.  According to literature values the Rh-H peaks are at 2099 and 2065 cm-1 [2,6].  The reactant readout, figure 2, has matching peaks to the product readout, figure 3, except it has no peaks at ~2000 cm-1 therefore it can be concluded that the product is in fact the hydrido Wilkinson’s catalyst.

The next step in determining the mechanism of the hydrogenation of cyclohexene was to determine the success of the cyclohexene conversion to cyclohexane.  The reaction, seen in figure 1, was successful based on the gas chromatography results, in figure 4. 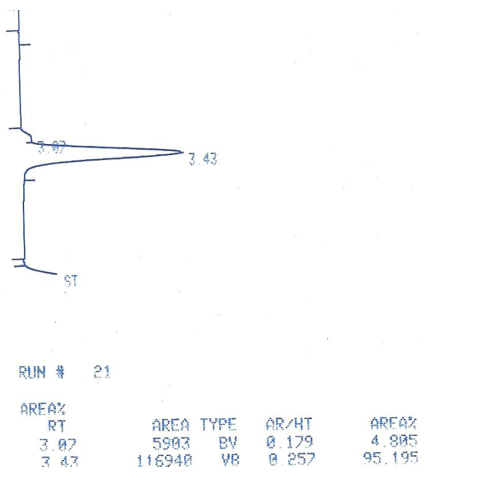 Figure 4:  The gas chromatography results of the production of cyclohexane from catalytic hydrogenation.

The above figure shows that 95.195% of the compound in solution moved at a faster rate than the other 4.805%.  The cyclohexane moves faster because it is saturated and therefore less polar.  The more polar substances move slower through this type of chromatography.

Since the previous experiments proved that each step as proposed was in fact true, the only thing left to determine was the kinetics of the reaction.  The sample of Wilkinson’s catalyst was prepared according to table 3 and the rate of the absorbance measured solution was prepared according to table 4.  A variation of these concentrations were used and characterized by other lab students to create a pooled set of data points for a more accurate analysis.

Table 3:  Data of the preparation of Wilkinson’s Catalyst solution

Table 4:  Data of the reaction mixture that was inserted into the spectrophotometer and the absorbance vs. time was measured

When the sample was run through the UV-vis spectrometer an expected increase of absorbance was seen for a short period of time until the absorbance began to level off around 1.0, as shown in figure 5. 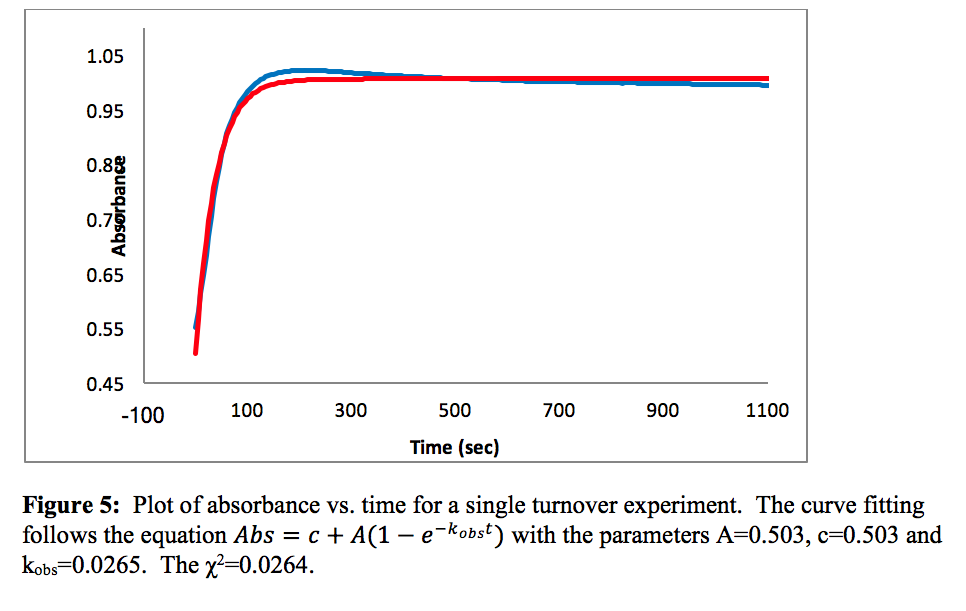 The rate observed depends on the equilibrium rates of k4 and k-4 (K4), the rate determining step k5 and the concentrations of PPh3 and cyclohexene, more specifically represented by equation 3. 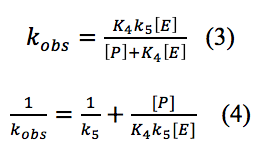 This equation can be rearranged as shown in equation 4, to make the data correlate better to the plot in figure 6. 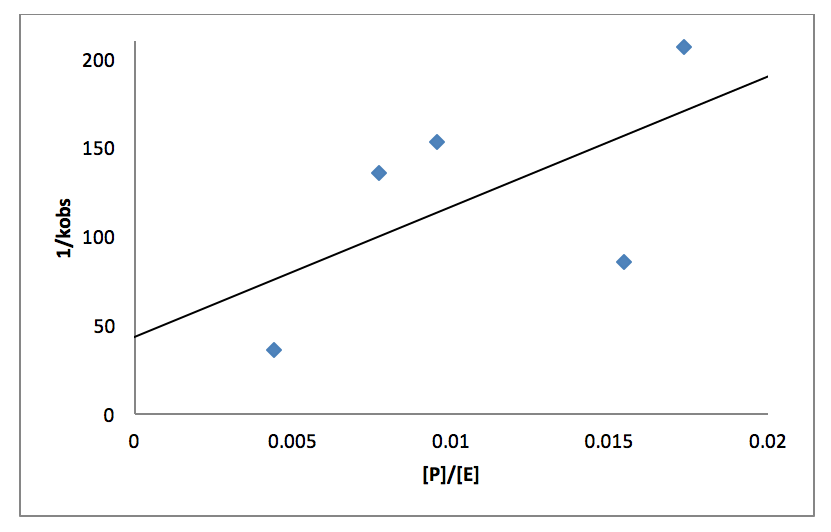 According to equation 4 the y-intercept is 1/k5 and the slope is 1/k5K4.  The k5 is equal to 0.0230 s-1 and K4 is equal to 0.00593 s-1.  The literature values for k5 is 0.20±0.04 s-1 and K4 is (3.4±0.6)×10-4 [4].  These values are more accurate because of the larger range of data points and the more advanced machines that can measure rates as fast as a nanosecond.  However the experimental numbers are only a tenth off and follow the same pattern that k5 larger than K4.  K4 is small showing that the equilibrium step goes mostly in the backwards direction and therefore the rate determining step is important in removing the products so that the equilibrium reaction goes forward to completion.  K4 is a very rapid equilibrium step further proving that the k5 step is the rate determining step.