Titration of a Diprotic Acid: Identifying and Unknown Technical Memo

Titration of a Diprotic Acid: Identifying and Unknown Technical Memo

All pH vs. volume of NaOH graphs for each trial appeared as they should have and were used to determine equivalence points. The most clearly defined equivalence points were the second one for all three trials. Molecular weight was calculated, using only trials two and three, and unknown 2 was determined to be maleic acid. Trial one was thrown out when calculating the average molecular weight because the amount of NaOH in liters was vastly different than the other trials and would have otherwise thrown off the average. These calculations can be seen below. The experimental value of the diprotic acid was 117.616 g/mol. Ninety-five percent confidence was ±8.97. The literature value of maleic acid is 116 g/mol. The standard deviation was 2.95 g/mol and percent error was 1.39%.

Goggles were obtained and worn. The pH Sensor was then connected to CH 1 of the computer interface. The Drop Counter was lowered onto a ring stand and its cable was connected to DIG/SONIC 1. For trial one 0.1213g of unknown 2 diprotic acid was weighed on a piece of weighing paper and the unknown acid was carefully transferred to a 100 mL beaker and dissolved in 40 mL of distilled water. Next, approximately 40 mL of 0.1 M NaOH solution was obtained in a 250 mL beaker. A plastic 60 mL reagent reservoir was obtained and rinsed with a few mL of the 0.1 M NaOH solution. The bottom valve was used to open or close the reservoir, while the top valve will be used to finely adjust the flow rate. To begin both valves were closed by turning the handles to a horizontal position. A utility clamp was used to attach the reagent reservoir to the ring stand and the remainder of the NaOH solution was added to the reservoir.

After this was done, a small amount of NaOH solution was drained into the 250 mL beaker so it filled the reservoir tip by turning both valve handles to the vertical position for a moment and then turning them both back to horizontal. The computer was prepared for data collection by opening the file “25b Titration (Drop Count)” from the Chemistry with Computers folder. To calibrate drops so that a precise volume of titrant is recorded in units of milliliters Calibrate DIG 1: Drop Counter (mL) was chosen from the Experiment menu. The Microstirrer was attached to the bottom of the pH Sensor. The positions of the Drop Counter and reagent reservoir was adjusted so they both lined up with the center of the magnetic stirrer. Next, the pH Sensor was lifted and the beaker containing the HCl solution was slid onto the magnetic stirrer. The pH Sensor was lowered into the beaker. The position of the Drop Counter was adjusted so that the Microstirrer on the pH Sensor was just touching the bottom of the beaker. The reagent reservoir was adjusted as well to place its tip just above the Drop Counter slot. Then the magnetic stirrer was turned on so that the Microstirrer was stirring at a fast rate.

To begin collecting data, “collect” was clicked. No data was collected until the first drop went through the Drop Counter slot. The bottom valve and top valve were fully opened and adjusted so that the drops were released at a rate of about one drop every two seconds. The graph was carefully watched for large increases in pH (equivalence points). Once the two jumps in pH occurred, the titration was allowed to proceed for several more milliliters of titrant. Finally, “stop” was clicked and the bottom valve of the reagent reservoir was turned to the closed position. The beaker contents were also properly discarded and this was repeated for two more trials, still using the same unknown. The first-derivative graph and second-derivative graph was examined to determine the volume of NaOH titrant used for the equivalence points. The decision was based on the basis of which derivative plot looks most similar to the ideal case.

The second equivalence points were most clearly defined on each trial. 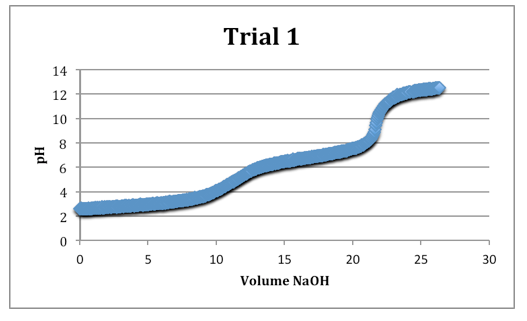 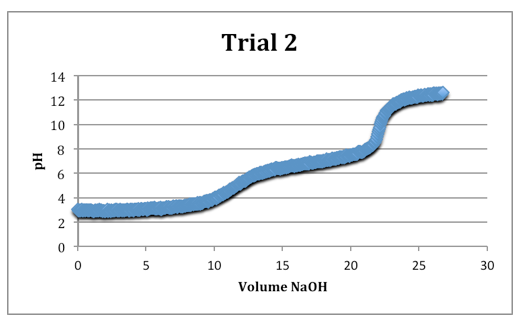 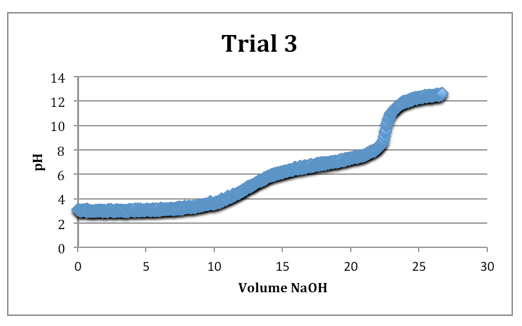 Table 1: Equivalence Points of Each Trial 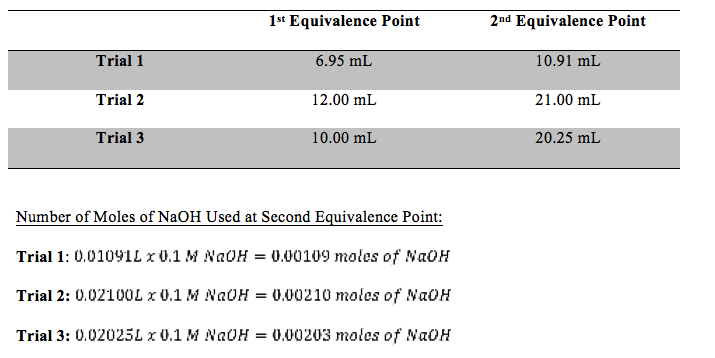 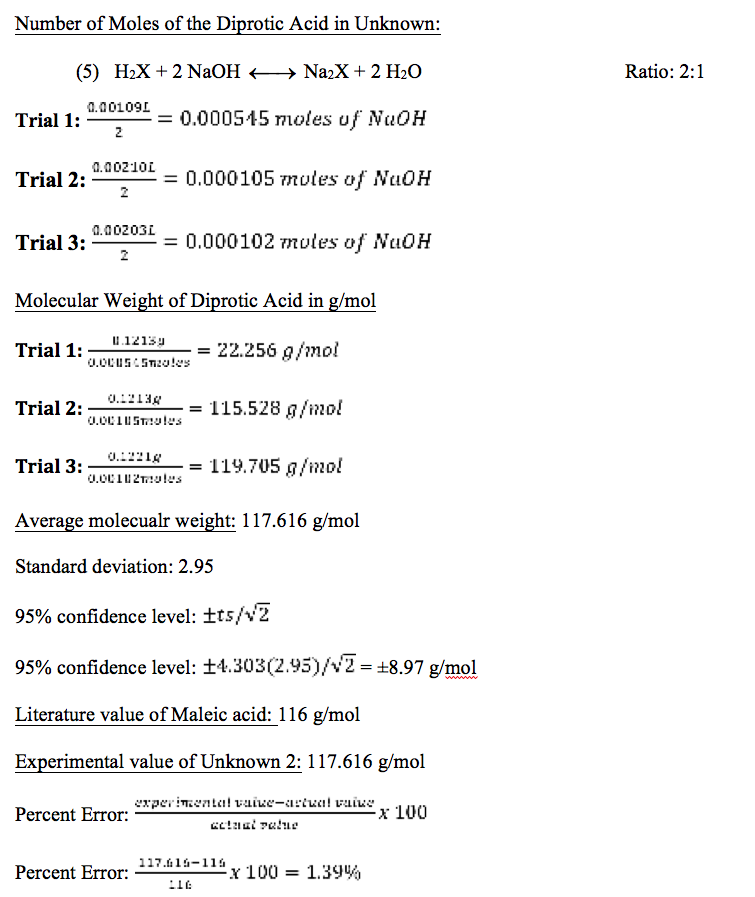 This experiment worked well. The experimental value of the diprotic acid was 117.616 g/mol. Ninety-five percent confidence was ±8.97. The literature value of maleic acid is 116 g/mol. The standard deviation was 2.95 g/mol and percent error was 1.39%. This percent error is very good. Trial one was thrown out when calculating the average molecular weight because the amount of NaOH in liters was vastly different than the other trials and would have otherwise thrown off the average. The issue with trial one could have been that the wrong number was chosen as the second equivalent point. This experiment should be performed again to work out this issue.