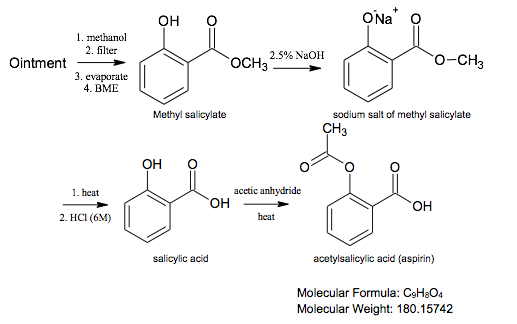 Methyl salicylate and menthol are extracted by methanol because the other inactive compounds are not soluble in it. The former is then isolated through acid-base extraction since it readily reacts with bases while the latter does not. The isolated methyl salicylate then undergoes an ester hydrolysis. During saponification, the hydroxide attacks the ester carbon and breaks the π bond. The electrons which were displaced onto the oxygen then attack the same carbon and regenerate the π bond, resulting in the loss of the methoxy group. The newly displaced alkoxide deprotonates the hydroxy group, resulting in an enolate. During acidification, the oxygen anion abstracts a hydrogen proton from hydrochloric acid, forming salicylic acid. This compound is converted to aspirin through acetylation. The hydroxy oxygen attacks the carbonyl carbon and breaks the π bond. The oxygen between the previously attacked carbon and the other carbonyl carbon then abstracts the hydrogen from the hydroxy group. The oxygen anion attacks the carbon it is attached to and regenerates the π bond, resulting in the loss of the carboxylic acid leaving group (—OHCOCH3) and the formation of acetylsalicylic acid.

Safety hazards that should be taken into consideration include the corrosiveness of HCl and NaOH, irritability of menthol, flammability of tert-butyl methyl ether and methanol, and toxicity of HCl, NaOH, and methyl salicylate. Acetic anhydride should also be dispensed in the fume hood as it is a lachrymator. 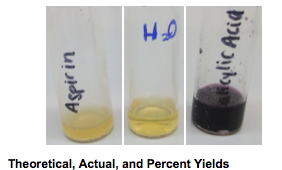