AIM:
The aim of this case study is to choose a suitable instrumental analytical technique to investigate the concentration of heavy metals in sludges collected from contaminated water courses. When choosing the analytical technique, a lot of factors needs to be looked at such as cost, sensitivity ( level of detection), physical state of matrix and availability of instrumentation.

INTRODUCTION:
Heavy metals refer to any metallic chemical element that has a relatively high density and is toxic or poisonous at low concentration. Examples of heavy metals include mercury (Hg), cadmium (Cd), arsenic (As), chromium (Cr), thallium (Tl), and lead (Pb). Higher concentrations of heavy metals can lead to poisoning.

ANALYTICAL TECHNIQUES AVAILABLE:
There are a number of analytical techniques we can use for the determination of heavy metals including:
1. ATOMIC ABSORPTION SPECTROSCOPY (AAS): It relies on the atomization of the determination by flame sources to form free atoms which can absorb radiation at discrete wavelengths. Each wavelength corresponds to only one element and the width of an absorption line is only of the order of a few picometers (pm) which gives the technique its elemental selectivity. The amount of energy absorbed is proportional to the concentration of the determinant present in the sample as the Beer Lambert Law applies.

2. FLAME EMISSION SPECTROSCOPY (FES): It involves the excitation of the sample in a spark or flame to produce line spectra of the elements present. It is a more sensitive technique than flame AAS for some elements & is suitable for multi element analysis.

3. UV / VIS SPECTROSCOPY: It is a relatively fast and simple method for the determination of heavy metals. For the application of this method metals, however, be converted to coloured complexes prior to the analysis using different chemical reagents. This analytical technique is mainly used to obtain quantitative information about a substance. The sample solutions are placed into cuvettes & exposed to UV and/or visible light. The unabsorbed light is then focussed onto a photomultiplier tube detection system using a double beam design. The measured absorbance is proportional to the metal concentration as the Beer Lambert Law applies.

PREFERRED ANALYTICAL TECHNIQUE:
Atomic Absorption Spectroscopy (AAS) is the preferred analytical technique due to the following reasons:
• AAS is most widely used technique which uses simple, inexpensive instrumentation and is rapid.
• AAS can be used to analyse the concentration of over 62 different metals in a solution.
• AAS is very sensitive and can measure down to parts per billion of a gram (ug/dm-3) in a sample.
• AAS can also be used for the analysis of metals like arsenic, antimony, tin, selenium, bismuth and mercury if hydride (generation) AAS is used. It is used to separate and pre-concentrate analytes from sample matrices by a reaction that turns them into their hydride vapours. Sodium borohydride is the common reagent for the reduction.
• FES is not the preferred analytical technique as it has a relatively low precision and suffers from matrix effects & high instrumentation costs.
• UV / Vis spectroscopy is not the preferred analytical technique as although it has a broad area of applicability, high sensitivity and rapid automatic method, BUT the sample preparation is time intensive as well as the measuring procedure (binding to complexes, adjusting pH value, special extraction procedures to obtain coloured metal complexes to be determined by UV / Vis. ALSO it is affected by interferences by other coloured substances in the sample.

And hence, the absorption (A) is directly proportional to the concentration (c).

AAS makes use of the wavelengths of light specifically absorbed by an element. METAL ions or METALLOIDS in an aqueous sample are vaporised and thermally atomised by a flame. The flame is created by a fuel and oxidising gas. A specific element related spectral light (source: hollow cathode lamp) is radiated through the atomization cell, and a certain wavelength is filtered out of the lines of the spectrum of the element by a monochromator. The difference in the intensity between the sample and reference beams produces a signal which is directly proportional to the total number of free atoms present of the element under analysis. A calibration curve is constructed by running samples of known concentrations under the same conditions as the unknown. With the flame method, a detection limit of a few mg/kg (ppm) is achieved.

APPARATUS:
The block diagram of AAS is as follows: 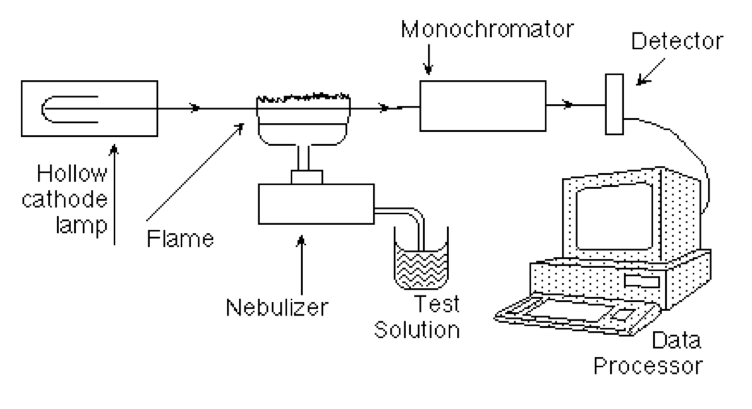 DISCUSSION:
There are a range of factors which could adversely affect AAS analysis.

CONCLUSION:
There are a number of analytical techniques we can use for the determination of heavy metals such as Flame emission spectroscopy and UV / Vis spectroscopy, but Atomic Absorption Spectroscopy (AAS) is the preferred analytical technique due to its cost effectiveness, sensitivity and its applicability. Although there are a range of factors which could adversely affect AAS analysis, all these factors can be overcome.

REFERENCES:
• Google images for block diagram of AAS.
• Instrumental techniques: theory and practice book for description of components of AAS.
• http://www.lasalle.edu/~prushan/Intrumental%20Analysis_files/AA-Perkin%20Elmer%20guide%20to%20all!.pdf – for optimization parameters and interferences.