The purpose of this experiment was to determine the yield, percent recovery and melting point of caffeine isolated from tea bag. During the experiment, a tea bag was heated in boiling water for about 15 minutes. The resulting mixture was collected for the extraction of caffeine. Caffeine isolation was accomplished from the mixture using methylene chloride. This is because caffeine is more soluble in methylene chloride than in water. Sodium carbonate was also added to the mixture. This was done to form a sodium salt derivative of tannin compounds contained in tea. Tannins are a class of compounds that have certain properties in common.1

Tannins have a phenolic group and also hydrolyzes to form an acid. Because of their phenolic groups and acid formation after hydrolysis, they can react with sodium carbonate to form a salt. The salt is soluble in aqueous solution; therefore, it does not separate into the organic layer. The organic layer separates to the bottom because methylene chloride is denser than water. A micro pipet was used to transfer the organic layer to a flask. It was dried using sodium sulfate. The resulting dry mixture was evaporated by heating. Because of low boiling of methylene chloride, it vaporizes at 400C and impure caffeine crystals were collected. Caffeine do not vaporizes at this temperature because it has a boiling point of 1780C and a melting point of 2380C. The impure caffeine had a melting point range of 223.6-229.30C. This suggested that it contained impurity. Sublimation was used to extract pure caffeine from the impure. The tea bag yielded 0.031g of crude caffeine, which is about 1.3% of the mass of tea in one tea bag. 13% of pure caffeine was recovered after sublimation. The sublimed caffeine had a melting point range of 231.2-234.60C.

Caffeine is a common substance and is found in coffee, tea, soft drinks and chocolates. It can be isolated from natural sources like tea leaves, cola nuts and cacao beans. Caffeine is an alkaloid, and more specifically, a member of the methlxanthines.2 Caffeine has been found to act as receptor antagonists by inhibiting the effect of adenosine.3 Adenosine is a modulator that regulates sleep and other neural phenomena in human.3 This inhibitory effect of caffeine makes it a central nervous system stimulant. High doses of caffeine in human adult can be fatal. The acute lethal dose of caffeine in human adult has been estimated to be 10g/person.4 To isolate caffeine from tea, extraction is used to separate the caffeine from other components of tea. Extraction is a separation technique based on the differences in the solubility of substances in two immiscible solvents.5

For the purpose of this experiment, methylene chloride was used as the solvent because caffeine is more soluble in methylene chloride than in water. Caffeine was extracted by adding 3ml of methylene chloride to the tea solution. 0.5g of sodium carbonate was also added to the mixture. Sodium carbonate was added in order to convert tannins and gallic acid to sodium salts which are soluble in water. When the extraction was carried out, an emulsion was formed. An emulsion is dispersion of liquid in another liquid. The emulsion was broken into two layers by centrifugation. The organic layer which is denser than water settled on the bottom of the tube, while the aqueous layer was on top. The high density of the organic layer is because of the two chlorine atoms bonded to an alkyl group in methylene chloride. The organic layer was separated from the aqueous layer and dried by adding sodium sulfate. Drying is complete when the sodium sulfate clumps together. When this had occurred, the organic layer is separated from the hydrated sulfate using a Pasteur pipet.

The dry organic layer was then evaporated by heating in water bath.  After the methylene chloride had evaporated, solid caffeine was collected which had some greenish stains on the solid crystals. The melting point of the crude crystal was found to be between 223.60C-229.30C. This suggested that the crystals contained impurity. The crude crystal weighed 31mg. This mass was calculated by subtracting the mass of the flask from the mass of the flask when it contained crude caffeine crystal. The crude crystal was purified by sublimation under reduced pressure. The pure crystal recovered was whitish and had a powdery texture. The percent recovery was calculated by dividing 0.004g which is the amount recovered by 0.031g, amount of impure crystal and multiplying the result by 100. The melting point of the recovered crystal lied between 231.20C-234.60C. This range differed from the pure range of 235.30C-238.50C. The literature melting of caffeine is 2360C. The difference in melting point was as a result of operator error and the crystal absorbing moisture from the ice cooled tube used in the set up and from surrounding air. 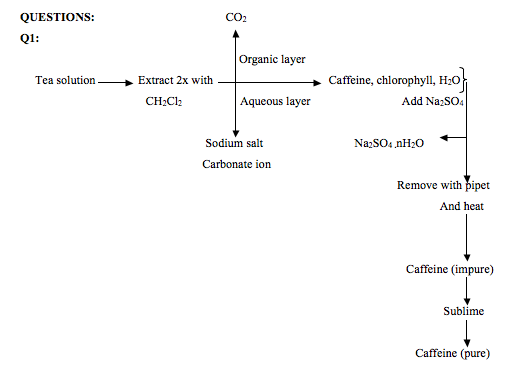 Q2: Both calcium carbonate and sodium carbonate was added in the two experiment to form a salt derivative of the tannin compounds.

Q3: This was because it contained chlorophyll

Q4: Some possible explanations are the caffeine might still contain impurity as a result of equipment error, and also the caffeine may have absorbed moisture condensing on the cold test tube from the surrounding air. This causes it to become wet.

Q5: More heat would be required to sublime the crystals which can cause it to decompose.