Mouthwash is an antiseptic solution used as a hygienic product for oral health. This antiseptic can kill bacteria, prevent and combat plaque buildup, gingivitis, and bad breathe. The two mouthwashes analyzed in this experiment are Crest Pro Health Mouthwash and Listerine Mouthwashes. These two mouthwashes contain different active ingredients. Listerine’s active ingredients to kill bacteria are combination of eucalyptol, menthol, methyl salicylate, and thymol, shown in Figure 1.1 The use of alcohol as an active ingredient can burn the mouth and in some cases cause mouth sores. Crest Pro Health’s active ingredient an antiseptic, Cetylpyridinium Chloride (CPC), that can permeate mucous membranes and kill bacteria. CPC does not have the harsh effects that alcohol has on the mouth.2 Figure 2 shows the structure of CPC. 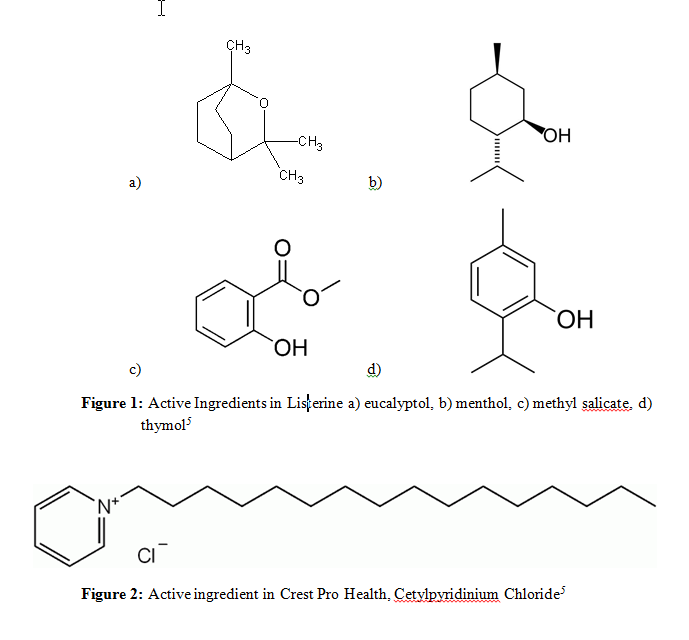 In this experiment, the percentage of alcohol in Listerine will be determined, and the absence of alcohol in Crest Pro Health will be confirmed via Gas Chromatography.

Gas chromatography (GC) can be used to chemical components in a sample. GC is a very popular separation technique, because it has a broad applications, and high measurements of sensitivity and selectivity. In GC, the components of the mixture are competitively distributed between the mobile and stationary phase. The mobile phase consists of a gas stream, referred to as the carrier gas. The stationary phase, which is packed into the column, is a solid, typically silica gel, in adsorption chromatography, and it is a liquid in partitioning chromatography. 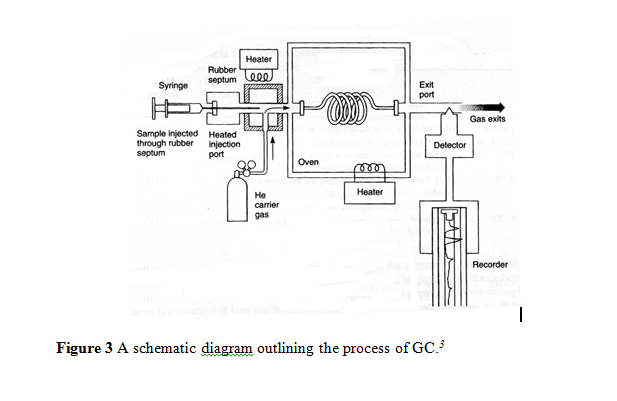 The standard alcohol solutions were prepared with 99.9% ethanol. The amounts of ethanol used according to % volume of alcohol are shown below in Table 1. Each amount was measured in a graduated cylinder and added individually to a 100 mL volumetric flask and filled with distilled water to mark. An aliquot if 750 µL of each standard solution was added to a 1 mL vial with a micropipette.

Table 1 The amount of 99.9% ethanol added to volumetric flasks to obtain % volume alcohol

A 1:10 dilution of each mouthwash was prepared and added to a 1 mL auto-sampler vials. The following parameters were programed into the CG:

The sample vials were placed into the auto-sampler and the GC was programmed to analyze the samples. After the samples were run, the retention times and peaks were recorded and identified. The % alcohol was determined for Listerine.