The experimental goal and purpose for this experiment was to use the primary extraction techniques to separate benzoic acid from a mixture containing cellulose, a natural polymer of glucose, and methyl orange. A new technique utilized during this experiment was extraction. The overall results were skewed because of error during the lab like not allowing the crystals to properly dry.

This experiment required the extraction of benzoic acid from a mixture of cellulose and methyl orange and in order to do so various methods were utilized. The first method used before extraction was the steam bath. In this experiment the steam bath was used to heat the low boiling point liquid of crude benzoic acid and 50ml of diethyl ether. Extraction is defined as the separation of compounds based on differences in polarity and solubility. A compound is polar if a difference in EN values within a molecule creates partial charges and creates a net dipole of polar bonds. A compound is soluble based on the rule that “like dissolves like,” for example polar solvents dissolve polar molecules. Liquids that have different polarities can either be miscible or immiscible.  Miscible liquids dissolve in one another, while immiscible liquids simply form layers on top of each other and do not dissolve.  You can determine whether two liquids will be miscible or immiscible by looking at their densities. The three different types of extractions learned this week included, solid-liquid extraction, liquid-liquid extraction, and acid-base extraction. Solid-liquid extraction is when a solvent is added to a mixture and is separated by filtration. This type of extraction was used in this lab through vacuum filtration. This extraction was very helpful in this experiment because it separated the liquid and solid in the most accurate way, therefore leaving us with accurate data. Liquid-liquid extraction is the separation of 2 liquids of opposing polarity that are immiscible in each other. Acid-base extraction is very alike to liquid-liquid extraction; however, this extraction method purifies acids and bases from the mixture. This type of extraction was also used in the lab to separate the aqueous solution layer from the NaOH layer (ether solution), using a separatory funnel. 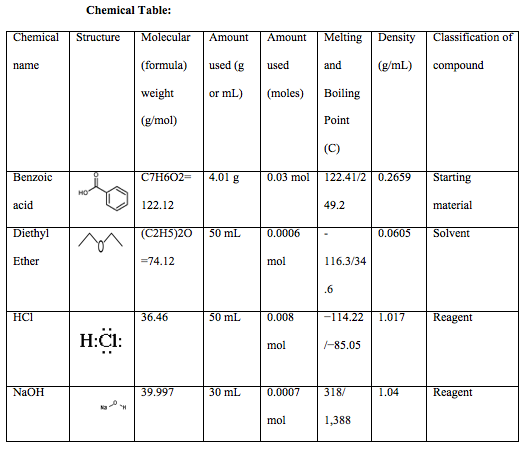 4.01 grams of crude benzoic acid mixture was weighed on a watch glass and then placed into a 125 mL Erlenmeyer flask. Afterwards, 50 mL of diethyl ether was also added into the same 125 mL Erlenmeyer flask along with a few boiling stones to prevent bumps from arising. This mixture was then placed on top of a steam bath until it began to boil. Immediately after boiling, the vacuum filtration method was used and the mixture was placed in a separatory funnel to remove the insoluble material from the mixture. We then transferred the filtrate (ether) into a 500 mL separatory funnel and added 30 mL of 1M NaOH. After allowing the mixture to sit for a couple minutes, we could see the layers separate. When the mixture was totally separated, the bottom aqueous solution was drained into a 250 mL flask and the NaOH process was again repeated with the ether solution to get the remainder of the aqueous solution drained.  The aqueous solution in the 250 mL flask was then placed in a bucket of ice 50mL of 6M HCl was then added to this aqueous solution, which immediately turned it a bright pink, which showed that the acid indicator methyl orange was working. After this, we again used the vacuum filtration method to separate the crystals, the solid precipitate. The crystals were collected and separated. They were not allowed the time to properly dry, which could have presented error.

The experiment began with 4.01 grams of crude benzoic acid mixture, which was subjected to an extraction. After the extraction process in a separatory funnel, vacuum filtration, only 1.97 grams of the mixture remained. The mass significantly dropped during this process because the mixture went through purification by the removal of cellulose and methyl orange. According to the data, the percent yield comparing the original and final data can be calculated by:

Before the last extraction, with the addition of HCl, the solution turned into very neon pink, however after a couple purifying processes, the separation of the benzoic acid crystals was successful but due to the fact that the crystals could not properly dry and a lot of the crystals stuck to the filter paper, therefore the results may be skewed.

After the crude benzoic acid mixture was added to the 50mL of diethyl ether, it took about 15 minutes to boil on the steam bath. The mixture in this flask was a dark brown color, however after using the Buchner funnel filtration process, the dark brown cellulose remained in the filter paper. This separation occurred because the cellulose was insoluble in the diethyl ether, therefore created the mixture to separate. After the addition of 1M NaOH to the filtered benzoic acid mixture, there was immediately a clear separation of the layers. This occurred because the solutions were immiscible due to the differences in densities and polarities.

After this separation, the bottom aqueous layer was orange, while the top organic layer was nearly clear. The benzoate ion in this case is highly polar so it can interact with the hydrogen from the water molecules. The methyl orange in this case is nonpolar so it remains dissolved in the organic layer. Once we had completely removed and separated the aqueous layer, NaOH was once again added to complete any separation that may not have occurred the first time. The benzoic acid still remains in the organic layer and repeating the addition of NaOH and extracting the aqueous layer each time can minimize this. This process was done three times in this experiment to ensure correct data. After the solute had been separated and the aqueous layer was placed on ice, 6M HCl turned the solution pink and white solid began to form in the solution.

This solution turned pink after the addition of HCl because a main property of methyl orange is that it is an acid/base indicator and since some of the methyl orange remained in the aqueous solution instead of staying in the organic solution, this lead the solution to turn pink. Following this, after another vacuum filtration, the creamy colored HBz solid remained in the filter paper. During the filtration, not all of the pink was filtered out, even after three processes of doing it, which may have contributed to the percent error. The solid HBz in this case was an indicator that some methyl orange still remained, so it was not entirely pure.

Finally, temperature played a role in this experiment because, after cooling the final solution to room temperature after it had been heated, the desired crystal solution was saturated and easily separated from the out of the solvent. The temperature also helped isolate the benzoic acid based on the solubility and polarity of the molecule. In conclusion, through liquid-liquid and liquid-solid extractions, benzoic acid was isolated from into original mixture due to polarity and density differences in this experiment.