The Bradford method uses a blue dye, Coomassie Brilliant Blue G-250, which binds to positively charged side groups on amino acids. The anionic form of the dye has a peak absorbance at 595nm, so the amount of dye bound to the amino acid can be found by reading the absorbance at that wavelength.

The UV method makes use of the actual proteins absorption in the ultraviolet spectrum. This method is fast, easy to automate, and nondestructive, which makes it ideal for determining protein concentrations. The downside of this method is the solution being analyzed would have to be relatively pure as other compounds also absorb at 280nm.

The Biuret method uses a Biuret reagent which reacts with proteins to form a Cu (II) ion with four nitrogens. This ion has a purple color, which has a peak absorption at 540nm. The intensity of the color is indicative of protein concentration. This method requires at least 1-20mg of protein, a relatively large amount. Also, false positives can be given if there is any ammonia or ammonium ions in the solution.

All of the methods described have limitations, which is why all three are demonstrated here. Each method is best in different situations.

The methods described here all relate absorption at a certain wavelength to concentration of protein. This relationship is described by the Beer-Lambert law which states A = E*l*C where A is absorbance, E is the molar extinction coefficient, l is the path length is cm, and C is molar concentration.  The absorbance of a protein is a physical property that belongs to it, just like a melting point or freezing point. The molar extinction coefficient is a number determined by the amount of tryptophan and tyrosine residues that are in the protein. So, because all values except concentration are determined by the physical properties of the protein being analyzed, you can easily find the concentration using the absorbance: C = A/E*l .

Directions were followed as laid out in Chem 431 Lab Manual (pp 14-23). The only changes were made during the Bradford Method. The Bradford Reagent was added to each microcentrifuge tube in 1 minute intervals to insure each sample was exposed for the same amount of time.

Part I: The Bradford Method. 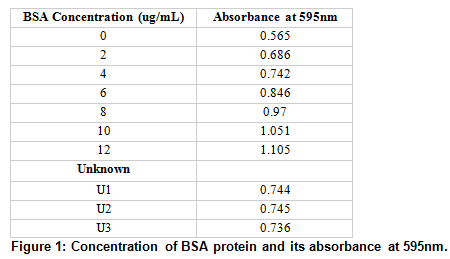 Using the linear approximation found using experimental data, the concentration of the unknown (sample 32) was found.

The absorbance at 280nm is plotted against protein concentrations. A trend line based on the collected data is given at y=603x + 0.0043 with a .9988 correlation.

Using the linear approximation found using experimental data, the concentration of the unknown (sample 29) was found. 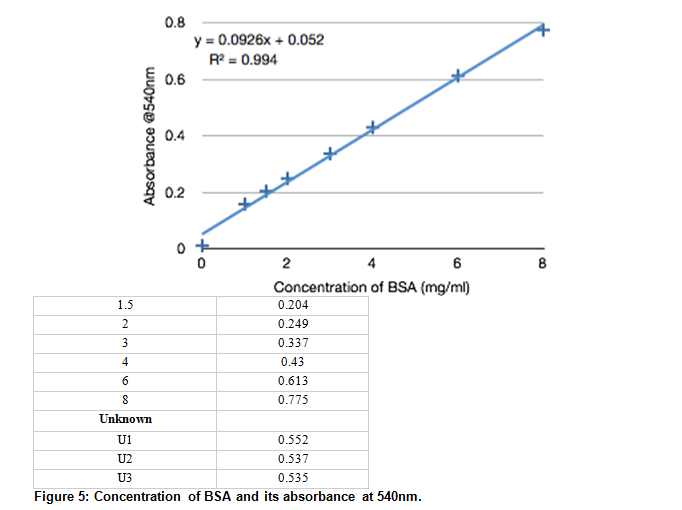 Figure 6: Biuret Method: Concentration vs. Absorbance. The absorbance at 540nm is plotted against protein concentrations. A trend line based on the collected data is given at y=0.0926x + 0.052 with a .994 correlation.

Using the linear approximation found using experimental data, the concentration of the unknown (sample 47) was found.

The results for the lab were both relatively accurate a precise. The correlation factors for each method were all above .99 which indicates precise readings. The comparison of known 260/280 data and experimentally discovered values were close, which leads to the conclusion of accurate results. Because the results were both accurate and precise lead to confidence in the results of this lab.

Using the linear fit line found in this lab using the UV method, a 1% solution of BSA should absorb 6.03 at 280nm. Modern spectrophotometers can generally only report to 3.0 absorbance units, so it would be impossible to find this value experimentally.

The absorbance for a 1M BSA solution is 43,824 M−1cm−1. The molar extinction coefficient depends on the number of Tryptophan and Tyrosine residues in the the protein, so a protein that weighs 66kD could have a different number of Tryptophan and Tyrosine residues and therefore a different molar extinction coefficient.