Nucleophilic addition of propane to p-tolualdehyde through the Grignard reaction

Nucleophilic addition of propane to p-tolualdehyde through the Grignard reaction

The purpose of this experiment is to synthesize a Grignard reagent (Grignard Reaction) from 2-bromopropane which is then used to synthesize 2-methyl-1-(4-methylphenyl)propan-1-ol from p-tolualdehyde and the created Gringard reagent.  The product was then purified using liquid-liquid extraction and rotary evaporation.  It was then identified using infrared and nuclear magnetic resonance spectroscopy.

This is the chemical equation for the creation of the Grignard reagent.

This is the chemical equation of the reaction of the Grignard reagent with p- tolualdehyde.

The contents of the reaction flask were poured into a 250-mL Erlenmeyer flask filled with ice water to the 50-mL mark.  The mixture was stirred rapidly while the empty flask was rinsed with 5 mL of 1M phosphoric acid and then 10.0 mL of diethyl ether, both of which were poured into the ice water.  Phosphoric acid (1M) was then added until the mixture indicated acidity by litmus paper.  The solution was then filtered and had its layers separated in a separatory funnel.  The aqueous layer was extracted with 10 mL of ethyl ether and added to the original organic layer.  The organic layer was washed with 10 mL of 5% sodium hydroxide, then with 10 mL of saturated sodium chloride solution.  The solution was placed in a 50-mL Erlenmeyer flask and dried for 5 minutes with anhydrous sodium sulfate.  The product was decanted into a 25-mL round bottom flask and the ether was removed by rotary evaporation.  The mass of the product was found to be 0.754 g, the percent yield was calculated to be 79.8%.  Using the made product, an IR spectrum and a 1H NMR sample was made.  The IR was prepped by adding one drop of product between to sodium chloride salt plates.  The NMR sample was prepped using 0.50 mL of CDCl3 and one drop of the sample.

The limiting reagent is p-tolualdehyde

The infrared spectroscopy agrees with the idea that the product is indeed 2-methyl-1-(4-methylphenyl)propan-1-ol.  Below, in table 1, the IR with their most likely peaks are shown.

Below, in figure 1, the IR with labeled peaks is also shown.  Peak 1 shows that there is an OH group, which our product contains.  Peak 2 indicates an aromatic ring, which both reactant and product contained so it is inconclusive.  Peaks 3 and 4 are alkanes which follow the same rule as peak 2, so they too are inconclusive.  The primary difference between the product and reactant is that there is no longer a carbonyl group.  There is no carbonyl peak but the presence of a hydroxyl group in the spectrum, leading to the assumption that the reactant is no longer present. 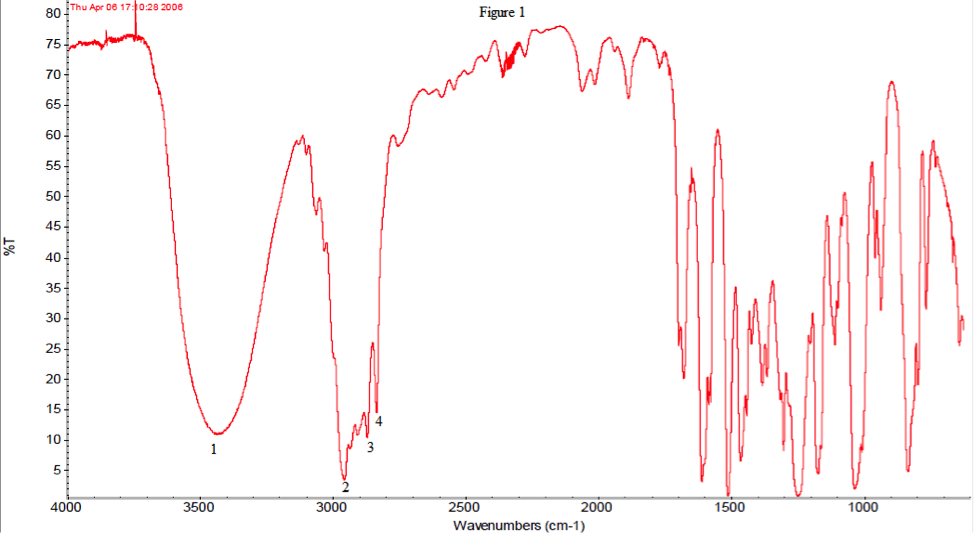 In table 2, the H1NMR results are shown along with their corresponding hydrogen.  Figure 2 shows the H1NMR and displays which hydrogen is which. 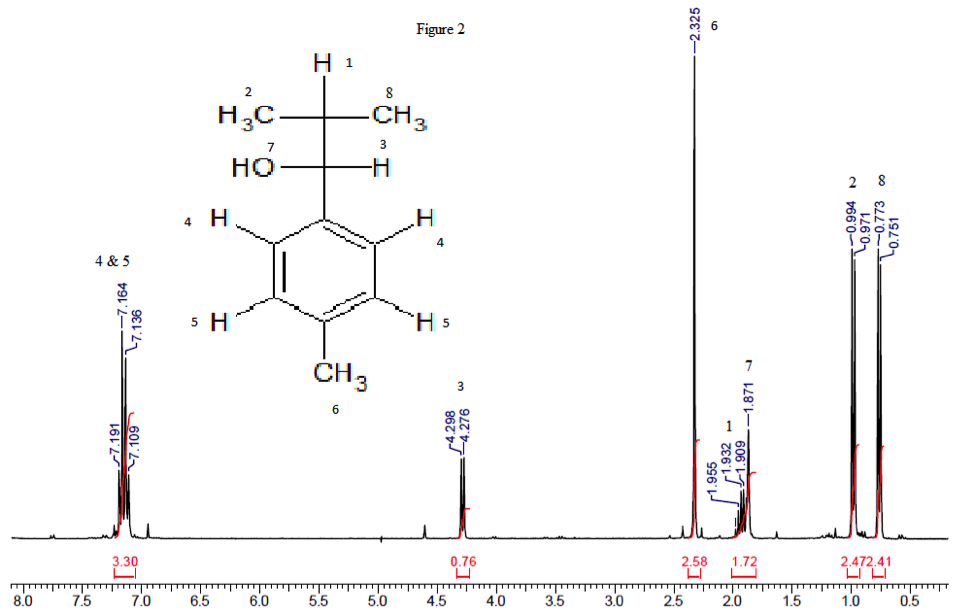 Because hydrogens 4 and 5 are on the aromatic ring, they are shifted downfield (7.164 δ).  Because it integrates to 4, that means that our aromatic ring has the correct number of substituents.  Hydrogen 6 is also slightly downfield (4.298 δ) due to being substituted on the ring.  It is also must be a singlet due to the fact that carbon it is attached to has no hydrogens.  Hydrogen 3 is very much downfield as well, likely because it is also right beside the aromatic ring.  Because it is next to a carbon with only one hydrogen and the hydroxyl hydrogen is hidden, it should be a doublet.  Hydrogen 7 has to be a doublet due to it being connected to an oxygen.  Hydrogens 2 and 8 are very close to each, but come up as separate peaks due to stereochemistry.  Because they are both doublets, they must be attached to a carbon with one hydrogen.  This makes the only choice for them to be on a terminal carbon.  Hydrogen 1 is more downfield than expected due to stereochemistry.  If the integration of the peak shown by hydrogens 1 and 7 is split up, that allows for one hydrogen each.  All peaks in both spectroscopy’s are accounted for.  According to all spectrums, the made product is the expected one.