The Role and Nucleophilicity of Chloride and Bromide Nucleophiles in Both Sn1 and Sn2 Substitution Reactions with Tert-Butanol and 1-Butanol
By: Rachel Wolfson*, Louis Kuo, Lisa Holmes, Luciano Santino, Cooper Jamieson

ABSTRACT
The purpose of this experiment is to determine the relative nucleophilicities of chloride and bromide in both an Sn1 and Sn2 reaction. It also investigates rate law kinetics and solvent effects. Tert-butanol and 1-butanol were reacted separately with equal mixtures of the nucleophiles in order to facilitate both types of substitution reactions, proton NMR was done to investigate the nature of the products. In each case the proton NMR confirmed two products were formed, though the ratio of the two products differed between the two substitution reactions. These results indicate that bromide is the stronger nucleophile. The 8:1 ratio of alkyl bromide to alkyl chloride products in the Sn2 reaction indicated that chloride’s concentration was diminished via caging solvent effects. Bromide’s greater nucleophilicity, aqueous solvent effects, (wherein chloride is caged by water), and rate law kinetics all contributed to a difference in product ratios for both substitution reactions.

This experiment specifically addresses two features of substitution reactions. First, it compares the nucleophilic nature of chloride and bromide, and second, it compares the effects caused by the structure of the substrate. By having the nucleophiles compete in the same reaction mixture, an NMR analysis will be able to reveal the proportion of nucleophilic attacks that occurred with bromine compared to chloride. In using 1-butanol, a linear primary substrate, and tert-butyl alcohol, a t-shaped tertiary substrate, we can expect to see both an Sn2 and Sn1 reaction respectively. Schemes 1, 2, and 3 outline the Sn1 reaction mechanism in detail. Scheme 4 details the Sn2 mechanism with 1-butanol. Formation of t-butyl bromide and t-butyl chloride is expected from the t-butyl alcohol, while 1-bromobutane and 1-chlorobutane will be synthesized from the 1-butanol.

Scheme 1. The overall Sn1 reaction for the formation of both t-butyl chloride and t-butyl bromide from tert-butyl alcohol and the reaction mixture 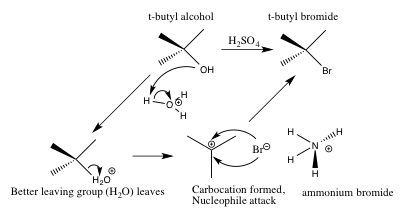 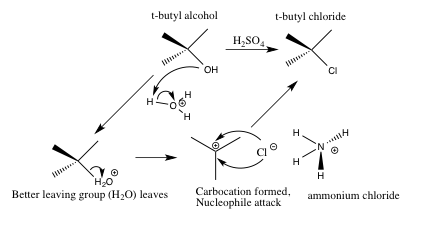 Scheme 4. Sn2 mechanism for the formation of butyl bromide and butyl chloride from butyl alcohol and the reaction mixture (ammonium bromide and ammonium chloride in sulfuric acid (45ml, ~7.5M))

Further, it is anticipated that in an Sn2 reaction, bromide will attack the substrate to a greater extent than chloride, since the rate of this reaction is dependent on both the substrate and nucleophile concentration, and bromide is a stronger nucleophile. The importance of this experiment is relative. It reinforces previous strongly held beliefs about the nature of these mechanisms in specific conditions, allows students to justify this for themselves, and through repetition, contributes to that paradigm of thought in organic chemistry continuously. It is significant in that knowledge of and familiarity with these mechanisms is fruitful for more specific monetary or intellectual pursuits.

Tert-butanol and 1-butanol were reacted separately with equal mixtures of nucleophiles.

Preparation of the Reaction Mixture

A portion of the reaction mixture (17.5 mL) and t-butyl alcohol (2.5 mL) were combined. The organic and aqueous layers were separated. Sodium bicarbonate (0.2564 g) was added to this organic product to neutralize any remaining acid. After the solution turned clear, a proton NMR analysis was done.

The remaining portion of the reaction mixture (27.5 mL) and 1-butanol (2.5 mL) were combined. This solution was heated at reflux for approximately one hour. After cooling, the organic and aqueous layers were separated. Sodium sulfate (0.2508 g) was added to this organic product to remove any excess water. After the solution turned clear, a proton NMR analysis was done.

In the synthesis of t-butyl chloride and t-butyl bromide, an Sn1 reaction occurs. In this substitution reaction, the proton NMR in Figure 1 reveals only two singlet peaks, indicating all the protons are chemically equivalent, as they would be in a tert-butyl formation. The most deshielded protons in (CH3)3CCl appear upfield from the most deshielded protons in (CH3)3CBr. There is a similar integral amount for both the bromide and chloride attack – the percentage of each alkyl halide in the reaction mixture were 51.3% and 48.7% respectively. This indicates that both the bromide and chloride ion appear to have a mostly equal attack rate, though the bromide’s is slightly higher. Since the product with bromide has a slightly higher percentage for an Sn1 reaction whose rate is not dependent on nucleophile concentration, it is possible to conclude that bromide is a stronger nucleophile.

The product distribution for the reaction mixture with 1-butanol differed greatly. In Figure 2, the most deshielded 1-chlorobutane protons appear downfield from the most deshielded protons in 1-bromobutane.  The integrals are varied, indicating 10.7% of the product was 1-chlorobutane and 89.3% was 1-bromobutane. This may be explained in part by the previous conclusion that bromide is a stronger nucleophile; it is larger than chloride, their radii being 182 pm and 167 pm respectively. This makes it more polarizable as the electron cloud can be distorted over a larger area – which in turn makes it more reactive. However, the main reason is likely that chloride, being smaller and having greater electronegativity, is more readily caged by water in the solvent than bromide. This inhibits it binding to the substrate electrophile. Even though in each reaction there is initially an equal concentration of both nucleophiles, rate law may explain this large difference in product distribution between the separate Sn1 and Sn2 reactions. The Sn2 reaction rate law is dependent on the nucleophile concentration, while the Sn1 reaction rate is only dependent on the concentration of the alcohol. As mentioned earlier, the caging of the chloride ion by the solvent may make it inaccessible and decrease its concentration availability. This has no effect on the product distribution for Sn1, but has a huge effect on the ratio for the Sn2 reaction that is dependent on nucleophile concentration. 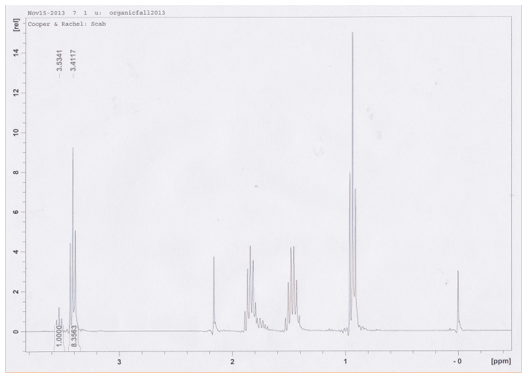 There are many factors to consider in substitution reactions, this includes but is not limited to the specific mechanism, rate law, solvent effects, and nucleophilicity. The proton NMR data here readily address the nucleophilicity of chloride and bromide, and underscores these ions’ functions in both Sn1 and Sn2 reactions with aqueous solvent conditions. These results indicate that bromide is the stronger nucleophile due to its slightly higher percentage in the Sn1 reaction. Bromide’s greater nucleophilicity, aqueous solvent effects, (wherein chloride was caged by water), and rate law kinetics all contributed to an 8:1 difference in product ratios for the Sn2 reaction.